All Olympic Events Within Metropolitan Tokyo to be Held Without Spectators 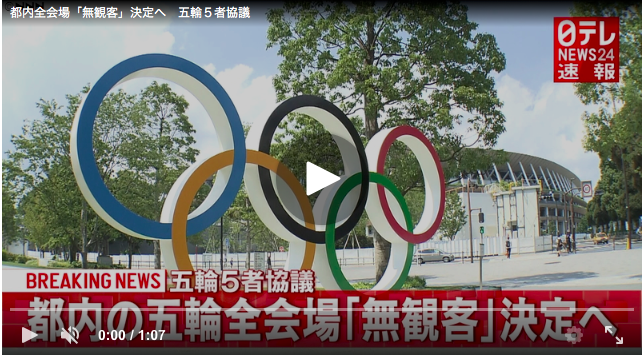 The IOC, IPC, Tokyo Metropolitan Government, the Organizing Committee and the National Government held a top-level meeting at 20:00. on July 8 to discuss the issue of spectators at the Tokyo Olympics. It was learned that they have made the decision that all Olympic events within metropolitan Tokyo will be held without spectators.
Following the announcement that a fourth state of emergency will be declared in Tokyo on July 12, the five parties agreed that barring spectators from all events within the city was the prudent move to take to combat the spread of the coronavirus. Multiple sources involved in the discussions confirmed the decision.
The issue of spectators at events held at venues outside of Tokyo will be discussed later in a meeting with the relevant local governments. In addition, a decision on the maximum attendance for Paralympic events, scheduled to be made by July 16, was bumped back until after the conclusion of the Olympics in order to better evaluate the situation with regard to the pandemic at that time.
source article:
https://news.yahoo.co.jp/articles/00fd40678556b42c8507368f3015e6402f7f56e0?tokyo2020
translated by Brett Larner

July 26, 2021
One of the only events to offer the average resident of Tokyo the chance to see Olympians in action with their own eyes, the men's triathlon went off with a snagged start Monday morning in Odaiba, Tokyo. A top 10 finisher in the 5000 m at the 2016 World U20 Championships,  Alex Yee  (Great Britain) did most of the heavy lifting on the run, reeling in breakaway bike leader Andrea Salvisberg (Switzerland) and shaking the lead group down to a trio with Hayden Wilde  (New Zealand), 3rd in the pre-Olympic test event, and Kristian Blummenfelt  (Norway), with two-time Olympic medalist Jonathan Brownlee (Great Britain) in tow.  Late in the last lap Blummenfelt executed the same strategy he did in winning May's WTCS Yokohama,  powering away from both Yee and Wilde and opening a lead of 11 seconds to take gold. Yee claimed silver for his work, making it three-straight Olympics with a British man on the podium, with Wilde another 9 seconds back to take bronze, bringing New Zealand back
Post a Comment
Read more

'The (Bizarre, Uncomfortable, Precarious) Life of Being An Olympic Athlete In Tokyo'

July 27, 2021
In contrast to hot and sunny conditions at yesterday's men's triathlon , the Tokyo Olympics women's triathlon went off Tuesday morning as the southern edge of a passing typhoon skirted the Tokyo area. Great Britain's Jessica Learmonth  led an initial breakaway group of seven through the swim and was in it through the bike. American Katie Zaferes  took over the front group shook down to just her, Learmonth, German Laura Lindemann  and Bermuda's Flora Duffy .  Duffy hammered the run, covering it in 33:00 and opening a lead of over a minute to take gold in 1:55:36, the first Olympic triathlon medal female or male for Bermuda. Zaferes dropped the others in the front group to move into 2nd, but on the third lap she was caught by Great Britain's Georgia Taylor-Brown , one of the people to have dropped back from the leaders on the bike. On the final lap Taylor-Brown broke away from Zaferes to take silver in 1:56:50. Zaferes held on to bronze in 1:57:03. Japan's Nii
Post a Comment
Read more