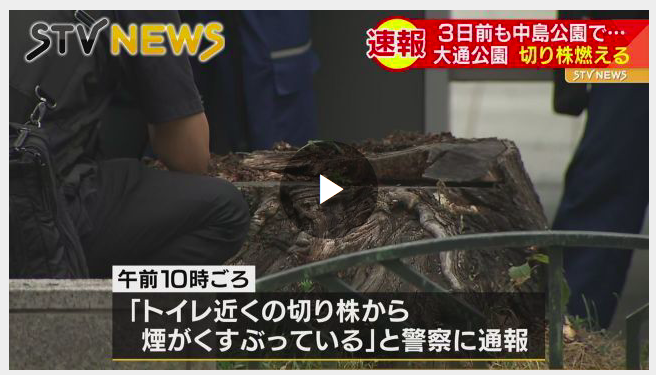 A fire was discovered in Sapporo's Odori Park, start and finish point of the Tokyo Olympics women's and men's marathons. Smoke was seen coming from a stump in the park. Three days ago, another stump was found burning suspiciously in Nakajima Park near the marathon course's southernmost point.
Police received a call reporting the burning stump at around 10:00 a.m. on July 29. One of the people who helped put the fire out said, "The smoke was heavy and the fire wouldn't go out even when we poured water on it." Afterward the stump, located behind a public restroom in the Odori Park, appeared charred and blackened.
Several cigarette butts were found at the site, which is to host the Tokyo Olympic Games marathons on Aug. 7 and 8. On the evening of July 26 the other suspicious fire occurred outside the Hokkaido Prefectural Museum of Literature along the marathon course in Nakajima Park. A tree stump next to the sidewalk in front of the museum was found to be burning.
source article:
https://www.news24.jp/nnn/news1131jlr3atmhz135a34.html
translated by Brett Larner