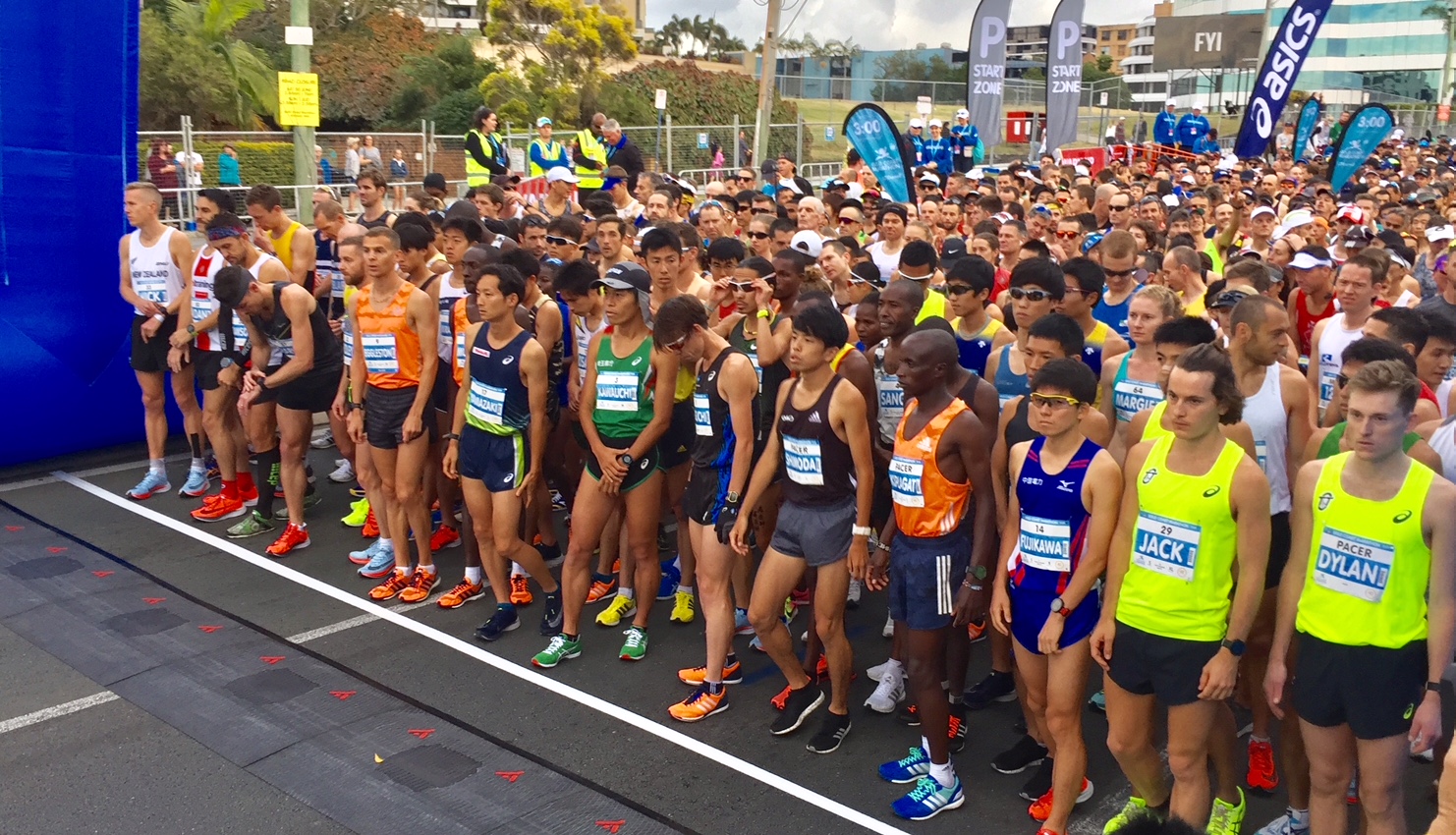 For the third year in a row Ausralia's Gold Coast Marathon saw its women's course record fall, with this year's Barcelona Marathon winner Ruth Chebitok of Kenya taking down favorite Agnes Barsosio and local Jessica Trengove for the win in 2:24:49. Consistent and in control despite extremely high humidity, Chebitok kept the race moving just under 2:25 pace the entire way, at times talking to the male pacers to get them to stay on track. 1:12:15 at halfway in a trio with Barsosio and Trengove, Chebitok covered the back half in 1:12:37 for the win, the course record, and a new PB. 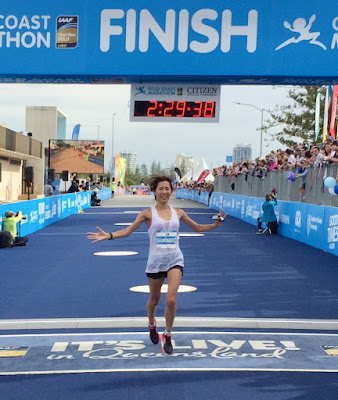 Trengove, aiming to go under 2:28 to share in a $40,000 bonus offered by organizers for fast times by Australian athletes, was the first to drop off, but maintaining her speed well she overtook Barsosio almost as soon as the Kenyan faded. Holding on for a 30-second PB, Trengove finished in 2:26:31 to take 2nd and pick up the time bonus. Barsosio was 3rd in 2:27:46, holding off Japan's newly independent Miharu Shimokado who got the next phase of her career off to a good start with a 2:29:38 for 4th.

Following up on her PB at the Ottawa Marathon, defending champ Sara Hall of the U.S.A. led the top five women to new PBs in the half marathon, running a best of 1:09:27 to mark the second-fastest winning time in event history. Australia's Sinead Diver joined her under 1:10 for the first time at 1:09:53 for 2nd, with Aussie-coached American Laura Thweatt 3rd in a PB of 1:10:17. Coached by former men's half marathon national record holder Atsushi Sato, Japan's Anna Matsuda ran the second-fastest Japanese women's time of the year with a 1:10:52 PB for 4th. Asian Games Japanese marathon team member Hanae Tanaka was a disappointing 9th in 1:15:19.

The course and Australian all-comers record holder thanks to a 2:08:42 win in 2015, winner again in 2016 in a sprint finish over future Boston Marathon champ Yuki Kawauchi, then outkicked by Japan's Takuya Noguchi in a mirror-image replay last year to take 2nd, 44-year-old Kenyan Kenneth Mungara judged his Japanese competition just right to win yet another sprint finish in 2:09:49 for his third Gold Coast title.

Pacers were tasked with running 3:01~3:02/km, and in an unusual scene they split the task between the two ends of that spectrum, the faster taking the Kenyan trio of Philip Sanga, Victor Kipchirchir and Douglas Chebii out front at 2:08-flat pace and the slower 10 seconds back on track for high-2:08. Sanga soon dropped back, leaving Kipchirchir and Chebii to DNF at their convenience.

With them out of the way, Mungara made an early move to the front, anxious to avoid another sprint finish but tailed by the best kicker in Japan, sub-61 marathoner Kenta Murayama. Noguchi and Kawauchi were unable to follow, Kawauchi dropping behind the lead group and Noguchi hanging near its front. Murayama, who showed no aptitude for the marathon in his first two attempts, kept attacking from 30 to 38 km, surging ahead only to be reeled in by Mungara every time.

The chase group faded into the distance, but after the final turnaround with just over 5 km to go a runner in black started to come into site. Initially it appeared to be defending champ Noguchi, but as he drew closer it turned out to be relatively unknown 2:15 man Jo Fukuda. To their surprise Fukuda caught the lead pair and went to the front just before 40 km, Murayama briefly trying to follow before running smack into the wall and stopping to vomit.

Mungara caught up and, remembering what happened last year when he misjudged an unknown Japanese runner, launched a long surge from 1 km out. Breaking free of Fukuda before the last lefthand turn with just over 300 m to go Mungara began to celebrate, but behind him Murayama was kicking hard to catch him. Murayama went by Fukuda with less than 200 m and bore down on the  man nearly twice his age, but Mungara's experience last year had helped him judge the situation perfectly. All three cleared 2:10, Mungara taking the win in 2:09:49 with Murayama right behind in a PB of 2:09:50 and Fukuda next in 2:09:52, like Murayama his first time under 2:15. 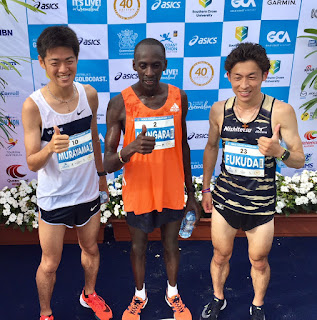 Mungara needs one more Gold Coast win to tie the record of four wins held by Australian great Pat Carroll. Murayama's performance was one just waiting to happen, but Fukuda was the real revelation of the day from the Japanese perspective, proving the truism that, like Noguchi last year, there's always some random 2:11~2:15 guy waiting in the wings to drop a big one. 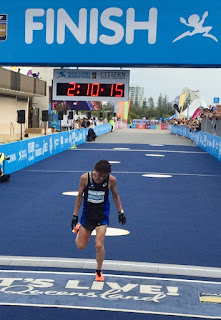 Noguchi was 4th. Under the rules of Japan's 2020 Olympic trials qualification system he needed to run 2:10:12 to qualify under the two-race sub-2:11 average option, but the clock ticked just over just beyond that as he crossed the line in 2:10:15. And he knew it. He'll now have to run under 2:11:45 sometime before next spring to land a spot in the September, 2019 trials race. 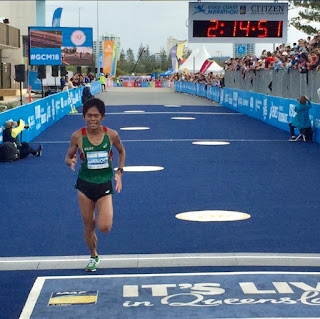 Boston champ Kawauchi finished 9th in 2:14:51, an improvement on his performance at last month's Stockholm Marathon and his 80th career sub-2:20 but far off his goal for the day. "Nobeyama took a lot more out of me than I thought," he said post-race of the 71 km ultra he did at altitude shortly after Boston. "I need to change up my training and refocus for the fall."

Andrew Armiger said…
Cool to see the top 3 Japanese men race so well overseas! Also good to see Shimokado break free and have a good race, perhaps a bit of Kawauchi effect. Kawauchi still has done better post-Boston than other high finishers there. But then that win was more of a level-up than a crowning laurel. Nice PR for Thweatt, too!
July 3, 2018 at 1:34 AM