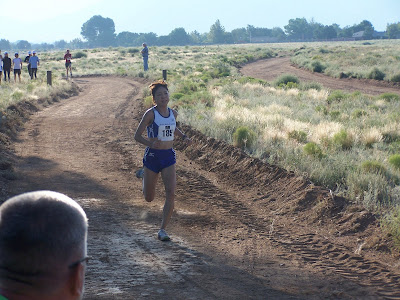 Kaori Yoshida racing in Albuquerque, NM. Photo by John Schrup.
Kaori Yoshida, a member of Second Wind AC since its founding in April, 2007, has left the club following her appearance as a guest runner at the Mar. 15 Kusunoki Marathon. I would like to thank her from my heart for the help she has given SWAC over the last two years and for her competitiveness and dedication in her own running. Yoshida has taken a position with Amino Vital AC and, while working with that club, hopes to continue on as one of the top distance running women. We're all looking forward to seeing the new Kaori Yoshida!

While we're sad that Yoshida has resigned from the club, Second Wind is still looking forward toward our future goals. We remain an organization dedicated both to supporting world-class athletes capable of reaching the Olympics, World Championships, and other major international competitions, and to cultivating young, promising talent. We likewise continue to pursue our main goal of helping amateur runners to reach their own goals.

These three levels form the pyramid of our club's operations. We thank everyone who has helped us in our mission and ask for your continued support in the future.

Translator's note: Kaori Yoshida, winner of the 2006 Hokkaido Marathon and 2008 Casablanca Marathon, was one of the runners who left Team Shiseido with coach Kawagoe in 2007. Kawagoe's Second Wind AC represented a new model for Japanese runners who wanted to pursue a career outside the ekiden-oriented jitsugyodan corporate system. Following the departure of Kenyan Ruth Wanjiru in February, Yoshida is the second major runner to leave Second Wind within the past month.

Anonymous said…
Who cares about Ekiden. It's not important. What's important is the world champs and olympics. It it true all year jitsugyodan corporate system train for ekiden all year! They don't train for the 10000 meters! We all know toyota industries won the ekiden.
March 17, 2009 at 7:49 AM