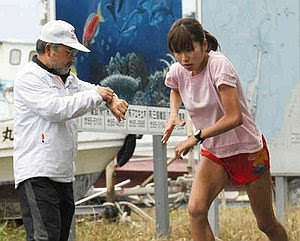 Among the athletes vying for a spot on the Berlin World Championships women's marathon team at the Mar. 8 Nagoya International Women's Marathon is Hitomi Niiya (Team Toyota Jidoshokki), a runner who hopes to become the successor to Sydney Olympics gold medalist Naoko Takahashi (36, Team Phiten). Only 21, Niiya is nothing like other Japanese runners the same age. Nagoya is already her third marathon. Ordinarily a coach brings an athlete up in distance gradually in order to minimize the risk of injury, but Niiya has pushed her way forward through her own determination and she will be standing on Nagoya's start line brimming with confidence. "I've never felt so positive about a race before," she says. "I'm running this to win it. The best way I can express myself is through running a tough marathon."

As a student at Kojokan High School in Okayama Prefecture, Niiya set stage records on the National High School Ekiden's 1st stage two years in a row. Her ability and pure power brought her national attention, and in 2006 she entered the Sakura AC training group in Chiba Prefecture to be coached by Yoshio Koide (69). Niiya showed her potential and how truly out of the ordinary she was by winning her marathon debut at the 2007 Tokyo Marathon at the age of 18. At the same time she had doubts about how much talent she actually possessed and her spirits sometimes swayed. She began to feel the effects of the attention she was receiving, saying, "At first I was really happy, but the weight of it all got heavier and heavier. It even started stressing me out when someone would say, 'Good luck!'" At a fall, 2007 training camp Niiya abruptly quit running, but she soon returned. 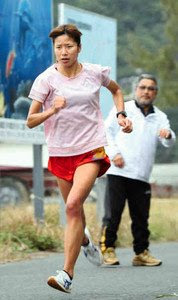 The turning point came at last summer's Hokkaido Marathon. At that race Niiya lost to her training partner Yukari Sahaku (Team Aruze), another 20 year old coached by Yoshio Koide. "I realized that I was the one responsible for blocking out the good feelings I used to have, nobody else," she says. "It gave me a lot of new motivation." With a new outlook on her training Niiya helped her lead Team Toyota Jidoshokki to its first National Corporate Women's Ekiden victory.

At the time Koide was still pessimistic about Niiya's future, saying, "She's not ready to think about a [big] marathon yet." At January's Kita-Kyushu Invitational Ekiden Niiya surprised Koide by beating Beijing Olympics marathoner Yurika Nakamura (Team Tenmaya). "She's really gotten focused all of a sudden and has gotten a real competitive edge. Maybe she can go all the way [to a win]," he commented reflectively. Koide had considered carefully before accepting Niiya into Sakura AC. "The main thing is that she herself wants to learn the marathon. There are people who make me think, 'She's still too young,' or 'She's not doing the workouts,' but someone who says, 'I'm the kind of person who wants to do this' is the type who will succeed. I can show someone like that that the marathon isn't easy."

With the goal of a Nagoya win in sight to motivate her Niiya has put herself through incredibly rigorous training. At the beginning February she went to Kagoshima's Tokunoshima island where she completed three 40 km runs, each three days apart. It was her first time doing true marathon training. "If I win in Nagoya," she says, "all of this hard work will be a good memory. I want to come out of this race somebody new."

The summer of her first year of junior high school Niiya watched Naoko Takahashi win the gold medal in Sydney, a race which inspired her to start running. "When I saw her win with a big smile that became my dream too," she recalls. "I want to win an Olympic gold. I'm really excited to be in the same race as Naoko Takahashi for the first time, too," she says enthusiastically. "[After the race] I'm going to go up and say 'Good job!' with a big smile of my own. Even though Ms. Takahashi is retiring I still want people to be able say that Japanese marathoning is strong." If all goes well, Niiya herself will be the one at the head of the pack.