In the 16th and final running of the Kyoto City Half Marathon on Mar. 8, the Hakone Ekiden's 'New God of the Mountain,' first-year Ryuji Kashiwabara (Toyo Univ.) won his half marathon debut in 1:03:16. Although he beat 2008 World Half Marathon national team member Kazuo Ietani (31, Team Sanyo Tokushu Seiko), Kashiwabara had a mature view of his performance, saying, "I can't let myself be satisfied with a run like this." 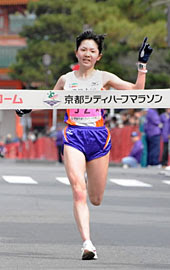 In the women's race, Kyoto native Kasumi Nishihara (Bukkyo Univ.) took over two minutes of her PB to win the women's race in 1:11:58. A pack of three stayed together until the final 5 km, when Nishihara attacked and dropped her two competitors. Yumi Sato (Team Shiseido) came second, with Chizuru Ideta (Bukkyo Univ.) finishing 3rd. Susumu Kangawa set a new course record of 11:02 in the 5 km wheelchair race.

Kashiwabara became a national name when he set a new stage record on the Hakone Ekiden's uphill 5th leg in January. In his half marathon debut here in Kyoto he ran alone after 4 km, racking up a commanding 46 second lead over eventual runner-up Atsushi Yamazaki (Juntendo Univ.) by 15 km. In high school Kashiwabara never made it to Kyoto's National High School Ekiden, so, he told reporters, "I'm really happy that my high school dream [of winning in Kyoto] came true." In mid-Feb. Kashiwara has some discomfort in his right knee and was unable to fully train for Kyoto, resulting in a slower time than he had hoped for. "My legs got pretty heavy after 15 km," he commented.

Looking toward July's World Student Games in Serbia, Kashiwabara says, "I want to run track." He plans to run the 10000 m. In addition he will run April's Hyogo Relay Carnival track meet. "I want to be the kind of athlete who focuses on each race one at a time," he concludes.

This year's Kyoto City Half Marathon was the event's final running as main sponsor Rohm is withdrawing its support due to current economic troubles. In 2011 Kyoto will launch a new international full marathon on a course which will take in many of the city's most famous sights.