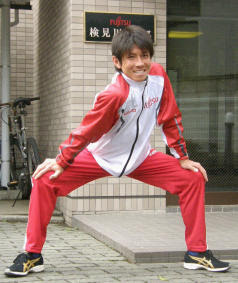 At age 32, former men's marathon national record holder Atsushi Fujita (Team Fujitsu) will be running the Tokyo Marathon for the first time in a bid to make the national team for August's World Championships in Berlin. Long since having lost his record, he doesn't want to end up in obscurity. "My goal isn't just to be the top Japanese finisher," he says with a champion's resolve. "I'm going to make the World Championships team by taking down all the strong international guys and winning."

When Fujita was 24 he set the previous national record of 2:06:51 at the 2000 Fukuoka International Marathon, becoming and remaining the only Japanese man to run 2:06 within the country. Coming in the wake of the disastrous showing by the Japanese men's team in the Sydney Olympics he was hailed as the new national star, but at the following year's Edmonton World Championships he couldn't put himself together and finished only 12th. Ever since then, he reflects, he has always "felt too negative" and not really brought his full will to selection races, falling away from the world stage.

In his last marathon, the 2007 Fukuoka International Marathon, Fujita had muscle spasms on the inside of his thighs and finished 8th while trying to qualify for the Beijing Olympics, falling just meters from the finish. Shortly afterwards in early 2008 his mother passed away from a brain tumor at age 54. Feeling lost, he left his longtime training base with his Komazawa University-era coach Hiroaki Oyagi and quit running. "Running became meaningless. I couldn't see what I was doing it for anymore," he relates.

After a time Fujita returned to Team Fujitsu's home office in Chiba, moving into the company dormitory to live with the other runners on the company's ekiden team. Gradually things began to change for him. "Coming back into that kind of group environment after being alone for so long helped me to cut down the stress I felt. I started to have fun again. I started to think I could do it again." Instead of focusing on his own marathoning as he had for years, Fujita turned to the ekiden. He began running workouts with the team, showing leadership to the younger runners by leading workouts and giving them advice when they needed it. Teammates and competitors alike were taken aback by the friendly, humorous and positive new personality he began to display.

Washing away his somber and stoic former self, Fujita led the team to its first New Year Ekiden win in 9 years, narrowly clipped for the stage best time by Keita Akiba (Team Komori Corp.) but easily outdistancing the other runners on the stage. "Damnit, you're fast, man!" he laughed right after finishing, clapping the obviously delighted Akiba on the back. But this was not his only achievement of the year. In the lead up to the New Year Ekiden he beat 5000 m national record holder and 30 km world record holder Takayuki Matsumiya (Team Konica Minolta), star rookie Satoru Kitamura (Team Nissin Shokuhin) and other competitive men to take the stage best title in the East Japan Jitsugyodan Ekiden. More significantly, he broke his ancient 5000 m PB with a new time of 13:54.65 and broke 28:30 for 10000 m for the first time in 5 years, clocking 28:25.67. Giving credit where credit is due, Fujita says, "Coming back to the ekiden has given me new direction. But now that ekiden season is over I'm ready for the marathon."

Along with his new outlook on life Fujita has taken a new approach to marathoning by avoiding the high-volume overtraining for which he had become notorious, focusing instead on speed. "I have a completely different mindset than before. I threw out everything I thought I knew about the marathon and started over," he says. To help himself prepare to deliver the kind of speed necessary to defeat today's world-class marathoners he has started regular weightlifting for the first time. "Strengthening my torso has reduced the instability in my form. And I've gotten a lot bigger," he laughs. "I used to always wear a medium-sized uniform, but this year I've had to go up to a large!" Of the effects of age he says, "I feel it in some ways, but I've been able to compensate for it in others. I'm making up for what I'm losing with age through efficiency and experience." Late in his career, the whole country waits to see this resurrected star's new style as he goes for his third World Championships.

Brett Larner said…
This is the last of the elite profile articles I'm translating. Apart from the one on Tosa I haven't been able to find anything on any of the women. My apologies. I'll give them equal treatment in the preview article I'm going to put up tonight.
March 20, 2009 at 10:35 AM