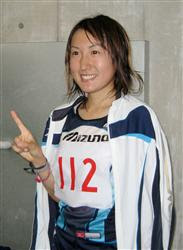 19 year old Megumi Kinukawa (Team Mizuno) staged a stunning comeback at the Oct. 13 Niigata Big Festa Track and Field Meet, running 31:23.21 in the 10000 m to break her own national record by over 12 seconds and beating former junior national record holder Kayoko Fukushi (26, Team Wacoal) in a one-on-one match race with male pacemakers. Fukushi finished just behind Kinukawa in 31:24.82. Kinukawa's mark easily breaks the A qualifying standard of 31:45.00 for next summer's Berlin World Championships.

Kinukawa was a national sensation in high school, her achievements as a student including competing in the 10000 m at the 2007 Osaka World Championships and setting her previous junior national record of 31:35.27, but late last year she contracted an unidentified virus which over the course of many months caused a series of illnesses and injuries and kept her from competing in the Beijing Olympics. She returned to competition in late September, and her new record less than a month later is a remarkable achievement. "This is the big step I wanted toward becoming world-class," smiled a joyful Kinukawa. "It gives me a lot of confidence."

Translator's note: Kinukawa's comeback is very significant news for Japanese women's distance running. She originally planned to aim for the marathon at the Berlin World Championships but evidently recognizes that this would be a difficult goal after more than nine months off. Nevertheless, her stated goal remains to move to a career on the roads sooner than later.