Shitara on Plans for Tokyo Marathon: "Unless I Run 2:04 I Won't Deserve to Run in the Olympics" 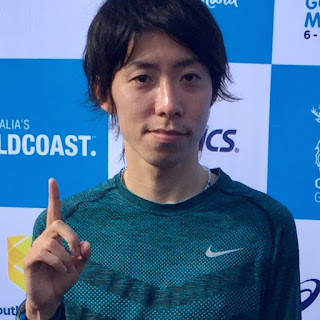 In an interview in Miyazaki on Jan. 23, former men's marathon national record holder Yuta Shitara (Honda) talked in no uncertain terms about his plans for the Tokyo Marathon, his last chance to earn a ticket to the 2020 Olympics. It's going to take breaking current record holder Suguru Osako's 2:05:50 national record to take the third spot on the Olympic team. But, said Shitara, "Even if I break the national record and am chosen, unless I run 2:04 I won't deserve to run in the Tokyo Olympics." If he runs a 2:05 national record, he said unambiguously, "I'll probably turn it down."

Commenting on Shitara's statement, his coach Satoshi Ogawa said, "I think he has complete confidence about winter races, but when it comes to summer races he's not as sure he can perform as expected. He probably thinks that there are other people who can do better in summer races."

Shitara also said, "Tokyo will be the last marathon I run in Japan," indicating that he plans to shift his focus to competing in high-level races abroad. The Tokyo Marathon is more than sufficiently high-level, regularly featuring athletes who have run in the 2:02 to 2:03 range, but, said Ogawa, "He wants to take on the challenge of competing internationally. He doesn't want conservative races, he wants to go fast and hard. For him it's all or nothing."

At the 2018 Tokyo Marathon Shitara ran a then-national record 2:06:11. After a planned confrontation with the man who broke his record failed to materialize at last year's Tokyo, the anticipation for his showdown with Osako this year is already building.