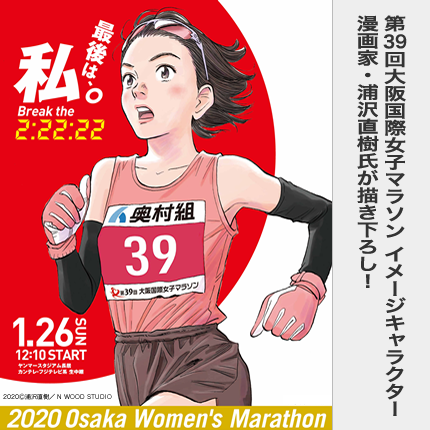 Gather round, y'all, Sunday's Osaka International Women's Marathon has a story to tell. It's the next-to-last chance for Japanese women to make the Sapporo 2020 Olympic team. All they have to do is be the first Japanese woman across the line and go 2:22:22 or better, as better as possible to keep the crosshairs that will be on their back at the Nagoya Women's Marathon in March down to a workable size. Three women on the list could conceivably play the protagonist and hit 2:22:22 on a good day, Rei Ohara (Tenmaya), Mizuki Matsuda (Daihatsu) and Kayoko Fukushi (Wacoal).

Ohara, last year's runner-up, has run as fast as 2:23:20 and currently has a provisional place on the 2020 Olympic team after finishing 3rd at September's MGC Race Olympic marathon trials. She's the one who stands to get knocked out if anyone hits the 2:22:22 standard, so while Nagoya might have made more strategic sense, here she is. A 28th-place finish at December's Sanyo Ladies Half wasn't encouraging, but she sounds optimistic.

Matsuda, whose 2:22:23 best in Berlin 2018 is the mark others have to beat to replace Ohara on the 2020 team, hasn't been in the same kind of shape since Berlin. She finished 4th at the Olympic trials in a gritty 2:29:51, putting her in the provisional alternate spot for the Olympic team. That by itself isn't good enough for her, and being the 2018 Osaka champion and a local she's opted to go for it on home soil.

Which leaves Fukushi. She's the only one who has actually cleared the standard before, running 2:22:17 to win Osaka in 2016 and make the Rio Olympic team. She had an extended break from marathoning after Rio and didn't do another one until Osaka last year, where she dropped out after an unlucky fall, but with a 2:24:09 a few weeks later in Nagoya she seemed to be close to being back to fully operational. If she pulls it off in Osaka and nobody betters her time in Nagoya, Fukushi will make her fifth-straight Olympic team. And that would be a gripping chapter indeed.

It's perfectly set up for that to happen, with four Ethiopian-born athletes, Haftamnesh Tesfay, Meskerem Assefa, Mimi Belete, and Sintayehu Lewetegn, and one Kenyan, Bornes Jepkirui, under 2:23 in the last two years and guaranteed to keep the action moving up front, plus last year's winner Fatuma Sado of Ethiopia. In the biggest plot twist, Hitomi Niiya (Sekisui Kagaku), who broke Fukushi's 2006 half marathon national record to win last weekend's Houston Half Marathon with support from JRN, will pace the first 12 km to try to help Fukushi and the other women make it to Sapporo. Having benefitted majorly from her pacers in that race, it's the least she could do to return the favor.

Held alongside Osaka, its companion Osaka Half Marathon has grown from a mass-participation mixed gender event to now feature as one of Japan's top post-ekiden season half marathons. Not being a national team selection event for the World Half Marathon Championships it doesn't get many of the big names, who mostly line up a week later in Marugame, but the fields are definitely not bad.

On the women's side, last year's winner Reia Iwade (Under Armour), the fastest female Japanese marathoner of 2019, is on the list as the only woman in the race to have broken 70 minutes. But she has serious competition from Yuka Hori (Panasonic), only 1:11:05 at the 2018 National Corporate Half but fresh off a 31:38.63 PB for 10000 m in December. 10000 m collegiate national record holder Hikari Yoshimoto (Daihatsu) should also be one of the bigger threats to Iwade after a brilliant anchor run at November's National Corporate Women's Ekiden.

On the men's side three men, Yuki Oshikawa (NTN), Naoya Takahashi (Yasukawa Denki) and newly-crowned Swedish marathon national record holder David Nilsson have all gone under 1:02:10 in the last year or so and make it a seriously close race up front. Sub-2:10 marathoners Jo Fukuda (Nishitetsu), Kenji Yamamoto (Mazda) and Kohei Matsumura (MHPS) should also be near the front end if not leading.

The Osaka International Women's Marathon will be broadcast live on Fuji TV starting at 12:00 Japan time Sunday. You might have luck with live streaming on either TVJapanLive or mov3.co. JRN will be covering the race live on-site and on @JRNLive. Options for the Osaka Half Marathon are a bit rosier, with an official live stream embedded above.