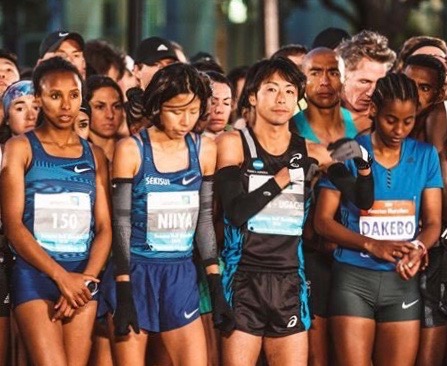 Ugachi has been known for his pure guts racing since his days at Komazawa University, where he played a big role in its 2008 Hakone Ekiden win. He has spent the last ten years at the famed Konica Minolta corporate team. In 2013 he and Niiya were teammates on the Moscow World Championships team, where Niiya finished 5th in the women's 10000 m and Ugachi 15th in the men's 10000 m. Nobody could have had a better combination of ability and mutual trust to do the job for Niiya.

During test runs on the Houston course and in Niiya's final track workout at Rice University Ugachi ran with her, Ugachi one step ahead and Niiya one step behind to practice what they would do in the race. The plan he was asked to execute called for a minimum pace of 3:10/km. "After the New Year Ekiden I prepared for being able to hold that pace comfortably," he said. "I studied her physical condition carefully too and could tell that there was no question she was going to break the national record."

During the race the gusting winds were occasionally strong, but overall, he said, he was able to adjust for them and was unconcerned. The pair went through 5 km in 15:37 and 10 km in 31:11. Hitting 15 km in 47:03 meant they had slowed to 15:52 for the 5 km between 10 km and 15 km, but even that was within the planned range. Discussing that detailed plan Ugachi said, "We had anticipated that there would be headwinds in the last 7 km, in particular on the long straightaway from 14 to 18 km. We knew that slowing down there would be inevitable, and in our last pre-race meeting we all agreed not to rush that part."

"To be honest," he laughed, "after 10 km it felt like I was the one being pulled along. Even at 10 km there was a sense of excitement rising up, a voice saying, 'This record is definitely going down.' From that point on it was more about watching Niiya run from up close. I could feel her pure strength, her power, and the thoroughness of how everyone on her team had prepared for this." 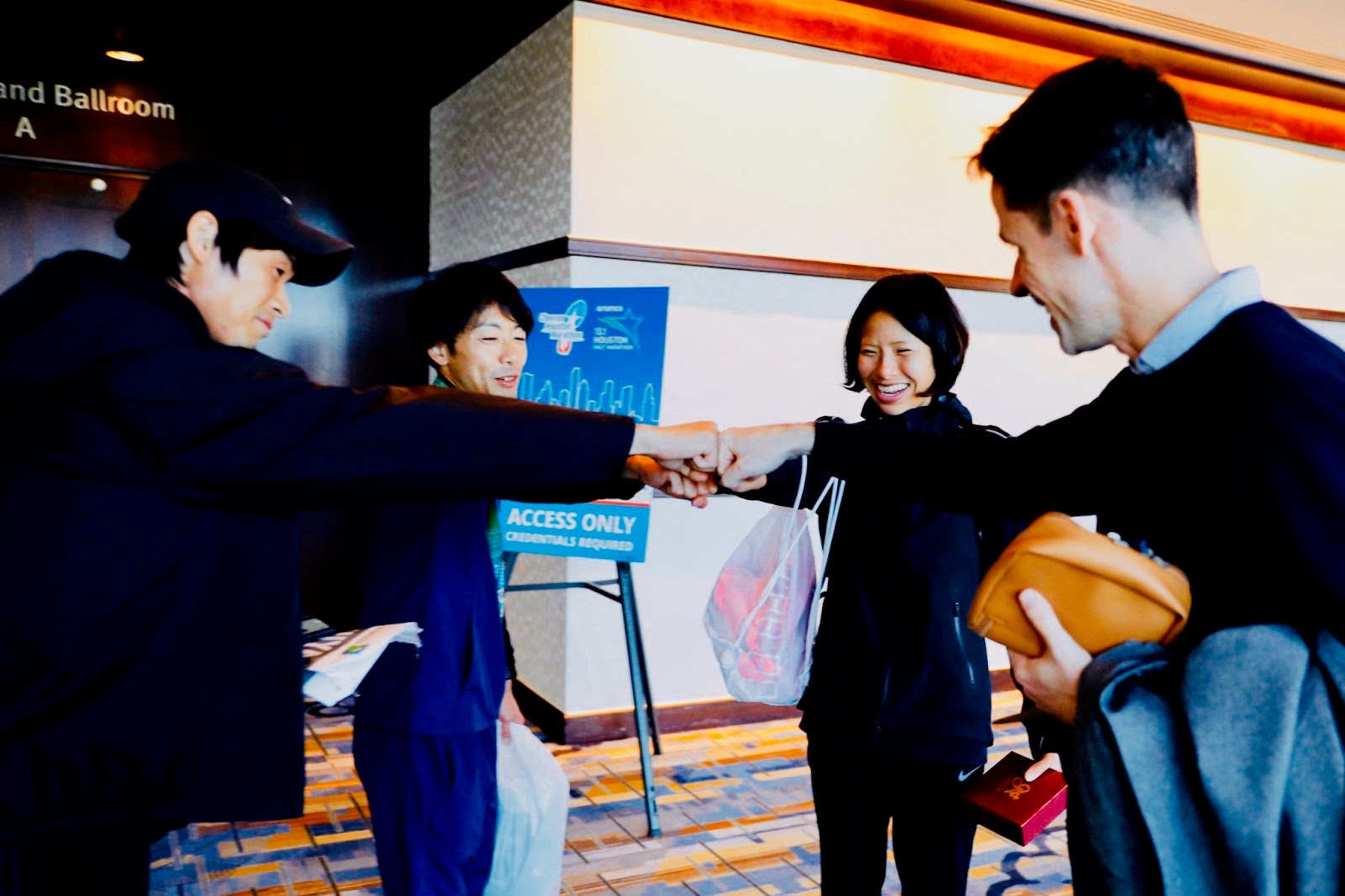 Underlying her stellar new record was the perfection of that team's support. Ugachi was particularly surprised by how the race plan was put together. "In my own running before this I'd never thought about the race in such detail or considered so many different scenarios. It had always just been about getting to the point where you were just going with the flow. This was really detailed, like, 'Up to 10 km it should feel like this. At this point it's probably going to feel like this. There's no way around that, so when you get to the last part after that you'll have to turn it on again.'" 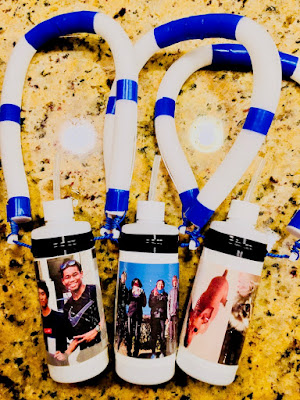 After the last meeting was done and Niiya had left, her coach Masato Yokota (32, Two Laps TC) continued to talk with Ugachi about the fine details of her physical and mental condition. They talked about every single point that might cause her anxiety, putting the final touches on the script for the national record performance.

Niiya's PB from before Houston, 1:11:41, ranked her far down the field. But it didn't stop her from opening a lead of 1:30 on 2nd place and taking down ferocious competition like Kenyan Caroline Chepkoech Kipkirui with a PB of 1:05:07 and 2019 Tokyo Marathon champ Ruti Aga of Ethiopia to win the gold label half marathon. It's safe to say that along with her successful pursuit of a 14-year-old national record, the world-class quality of the racing Niiya displayed was because she was competing as a team.

Just before the finish Ugachi dropped back to let Niiya go ahead and cross the line alone. "I knew she was going to win, and it was important that she have the moment to shine all to herself," he said. "But," he added with a laugh, "I still ended up in the finish photos, so I wish I had dropped back earlier." 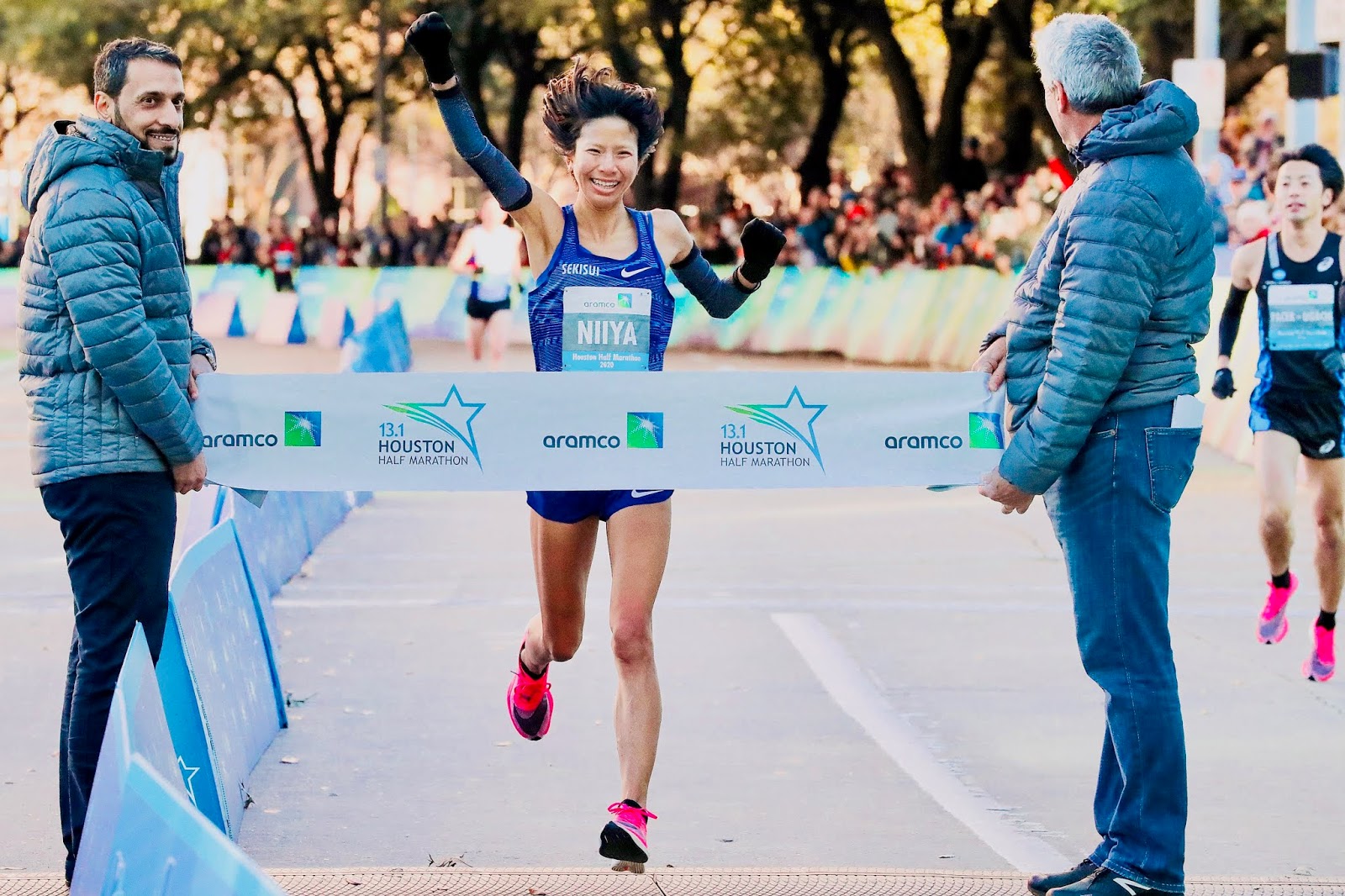 With this race done Ugachi intends to shift his focus to coaching, centering on the New Year Ekiden. "The results this time were great, but the process that produced them is something we can make accessible to athletes of all levels," he said. "We have to guide young athletes to help them understand all the little things they need to do on a day-to-day basis, and that they need to prepare carefully right up to the very end." For the man who saw the new Japanese national record from closer than anyone else, it served to inspire and propel him on into the next stage of his own life.

Andrew Armiger said…
Fantastic perspective and insights, much appreciated!
January 29, 2020 at 3:36 AM