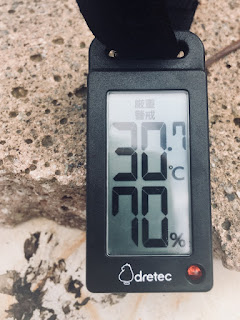 Last Friday I ran most of the 2020 Tokyo Olympics marathon course at the exact time that the women will be running it at next summer's Games. This Friday I plan to do it again at the time that the men's marathon will take place next year. An athlete who plans to run the Olympic marathon contacted me and asked if I'd be able to do it today as well, so at 6:00 a.m. sharp we were down at the Olympic Stadium ready to go.

This time around we ran from the start to about 11 km, going past the first two lefthand turns after 10 km before turning around in order to see the two small undulations on that section of the course that runners will hit on the way out to Asakusa just after 10 km and again on the way back just before 20 km. We cut out the two out-and-back sections up to Asakusa at 15 km and down to Shiba Park before 25 km, instead running the last part from about 29 km all the way back to the stadium including the turnaround in front of the Imperial Palace around 33 km. Total distance covered was about 25 km.

When I ran on Friday it was the hottest day yet this summer, the first day it went over 35˚C in Tokyo and with high humidity. Today temperatures were almost identical for the first hour of the run, but humidity was about 11% lower on average. Heavy clouds for the first 20 minutes or so kept conditions reasonable, but as with Friday the section along Yasukuni Dori from about 2 km to 7 km where athletes run directly into the sun with little to no shade protection saw tougher conditions than the first 2 km and later after 7 km after the turn into more building-lined streets. At almost the same spot along this section of the course where I saw two Olympic team hopefuls on Friday, this time we saw MGC Race Olympic trials qualifier Hayato Sonoda of the Kurosaki Harima corporate team, 2:09:34 PB last year and 4th at the 2018 Jakarta Asian Games marathon, heading toward the final uphill.

The clouds moved on, and as we did the 4 km or so out-and-back down to the 33 km turnaround we were under completely blue skies with the temperature rising quickly. The northern part of the stretch in front of the Imperial Palace is well-shaded by highrises, but for the last few hundred meters to the turnaround point, the same stretch of road that will be the racewalk course at the Olympics, it was completely exposed and brutally hot in the sunshine. Since we cut out the Asakusa and Shiba Park sections we actually hit that part of the course at almost the exact time that the lead men's group should be covering it next year. Given the conditions at that time today this will be the most dangerous part of the course despite the special pavement surface they've laid down and whatever mist stations they're planning on setting up. You might see someone try to rock it after the turnaround, but there will be a pretty high risk of cooking themselves before they get back to the shade if it's anything like today was. 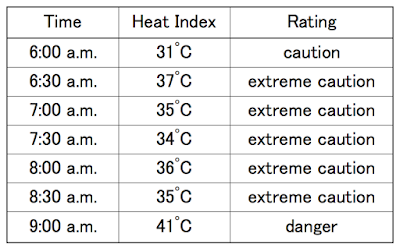 And this was a pretty favorable day. All in all conditions were about as far to the hospitable end of the spectrum as you could reasonably hope for in Tokyo in August, and it's likely to be hotter or more humid. As with Friday the temperature dropped slightly around Akebonobashi and 40 km, the approach to the final steep uphill on the course. Today at least that was due to the cloud cover coming back. But where the temperature jumped at around 9:30 on Friday and when I did this run last year, this time the jump came earlier, by 9:00, accompanied by a rise in the humidity. While conditions on Friday were mostly in the "danger" range on the heat index, today was almost totally in the "extreme caution" range, that final 9:00 a.m. reading the only one to tick over into dangerous territory. At three hours after the start that probably won't affect any men, but back-of-the-pack women could be impacted in similar conditions.

Friday I'll head back out to run the course one more time and take temperature and humidity readings along the way again. The plan this time will be to start at the 20 km point at Nihonbashi and run from there all the way to the finish. Follow along live on @JRNHeadlines and look for another report Friday afternoon Japan time. Thanks to 2018 European marathon champion Koen Naert of Belgium for asking to do this run today. 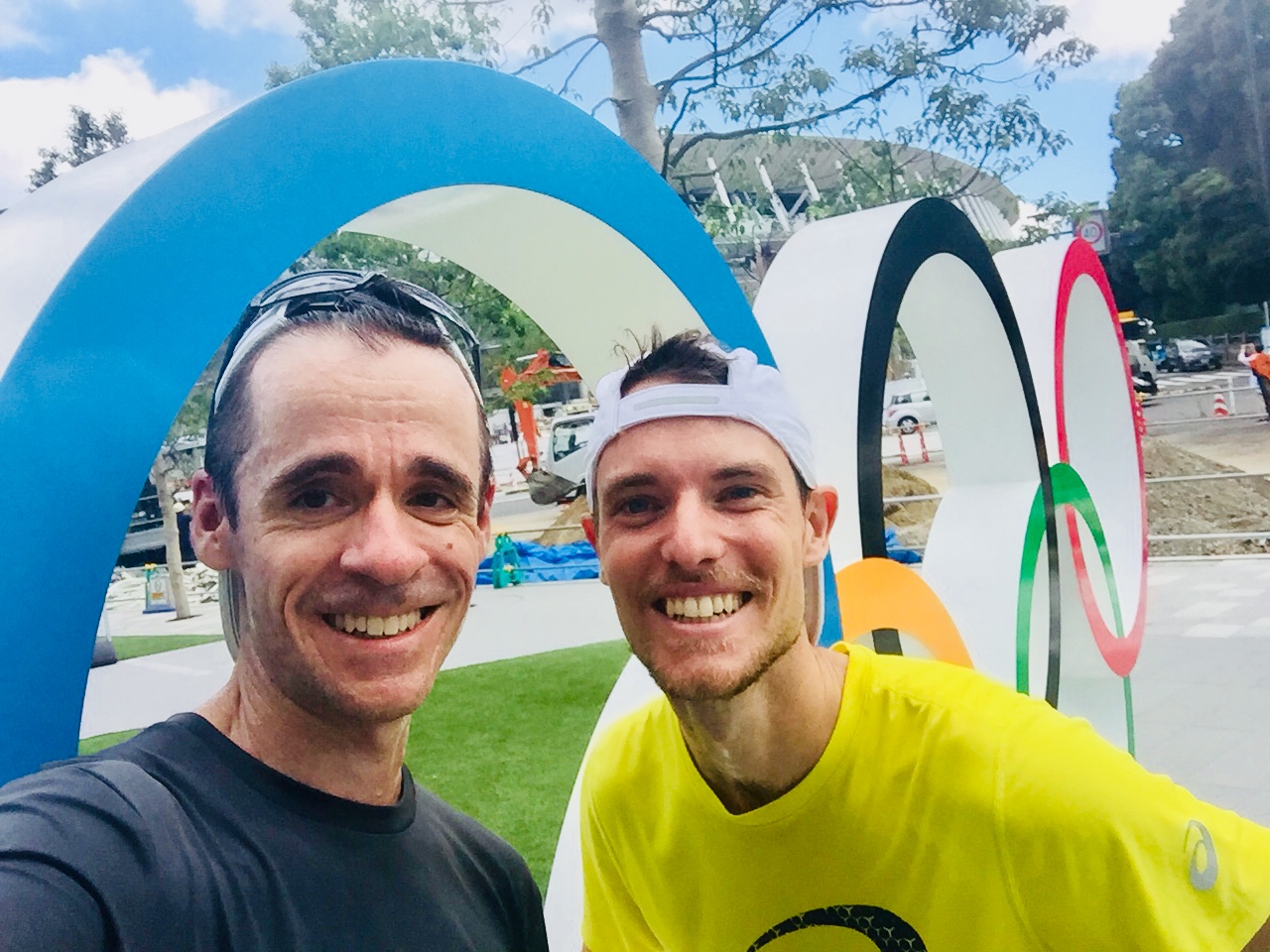