It's one year until the women's marathon at the 2020 Tokyo Olympics. For the second year in a row I went out to run about 31 km of the course at the exact time that the women will be racing it. As with last year, I started outside the Olympic Stadium in Sendagaya, ran up to the 15 km turnaround in Asakusa and back to the 20 km point near Nihonbashi, then cut out the out-and-back sections to 24.5 km and 33 km and instead headed back the 10 km or so to the stadium. 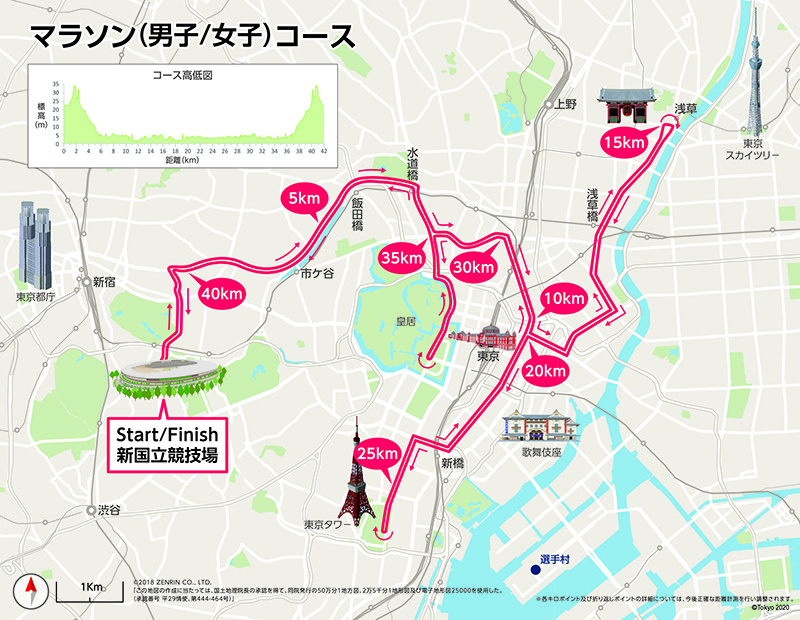 Starting at 6:00 a.m. sharp, I ran a steady pace just under 5:00/km and made it back to the stadium a little after 9:15 a.m. with about 45 minutes of time lost to red lights, shooting video and live Tweeting, buying drinks and the odd pit stop. Every half hour I stopped to take temperature and humidity readings to get an idea of what kind of conditions the women will probably be facing a year from now. 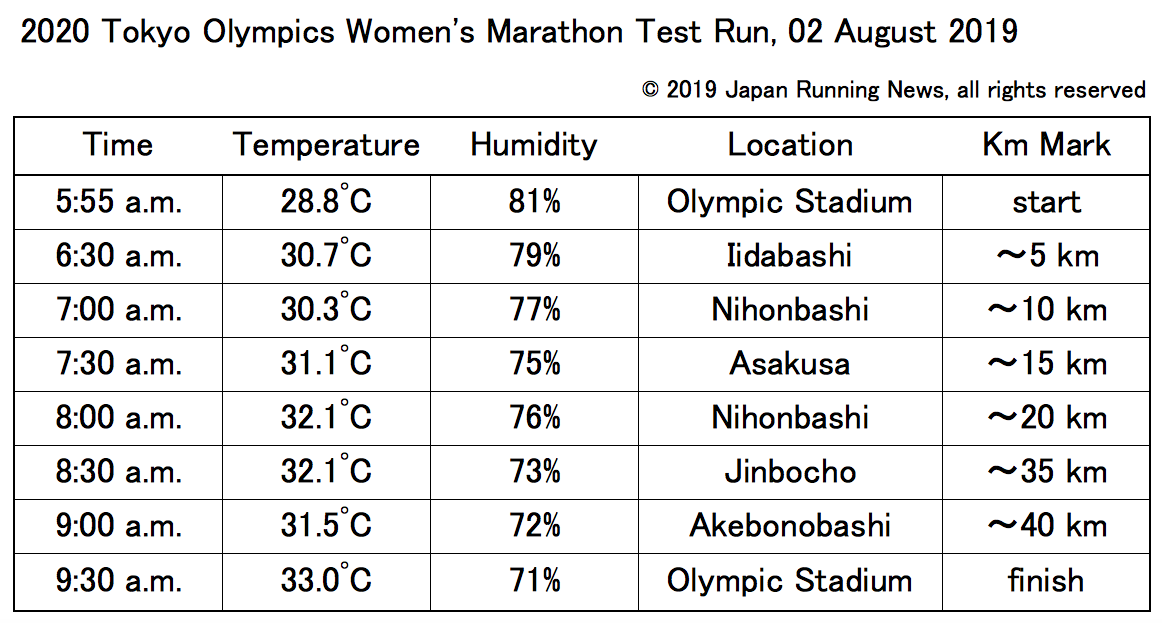 It's been a relatively cool summer so far in Tokyo with an extended rainy season that kept things from heating up until late July. Today was set to be the hottest day yet in Tokyo this year, with humidity to match. My gear for measuring temps and humidity flashes when it thinks conditions are too dangerous for exercise. Just before the 6:00 a.m. women's marathon start time temperatures were about 29˚C with humidity of over 80% under cloudless skies, enough to make it flash before I even started running.

Over the course of the next three hours as I followed the course around the downtown area the temperature climbed about 3 degrees, with humidity falling about 10%. Although the conditions were overall better than when I did the same run last year,  it subjectively felt like the humidity was impacting me harder. I don't remember feeling dizzy or being dripping with sweat until well into the run last year, but this time around when I stopped to shoot video of the first downhill just over a kilometer into the run I already was, both.

After 7:00 a.m. a light breeze began to blow once I was past Nihonbashi, not really enough to affect running performance but enough to feel cool and refreshing. It faded, but later in the run around 8:30 it came back, bringing with it a gossamer thin cloud cover. The temperature actually fell for a while, but after I got back to the Olympic Stadium, by 9:30 a.m., three and a half hours after the start time, the temperature jumped to 33˚C and continued to climb.

And in that you can see the biggest benefit of the start time's move from 7:00 a.m. to 6:00 a.m. During last year's run when the start time was still set to be 7:00 a.m., the temperature jumped at around 9:30 a.m., about the time you'd expect the medalists to be finishing the women's marathon +/-. The temperature jumped again this year around 9:30, but with a 6:00 a.m. start conditions were still a little more bearable two and a half hours into the run at 8:30 a.m. The sun was also lower this time, with better shade coverage from buildings on the east side of all the north-south sections. 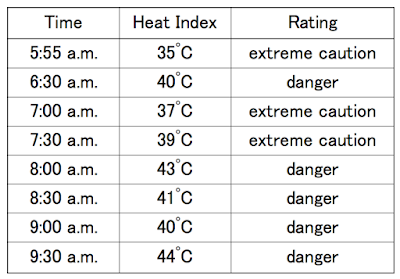 The conditions overall were still dangerous for a marathon, literally. Using the heat index scale, the section along the Kanda River from the top of the hill to the turn at Suidobashi where runners are running straight into the rising sun totally exposed, and the entire second half of the race scored in the "danger" zone, with the rest of the first half advising "extreme caution." But for at least the front-end contenders the shift to an earlier start time will partly lessen the risk in the last part of the race. Good luck to the back-of-the-packers, though. Be careful out there. My first clear memory of the marathon was of Gabriela Andersen-Schiess at the Los Angeles Olympics. We don't need that, or worse, again.

One thing that was noticeable this time, one year out from the main event, was that I didn't see any media out on the course. Last year they were everywhere, with reporters running short sections and TV camera crews shooting footage of models running here and there and dropping "It's hot!" soundbites. This time there was one crew at the start shooting footage of some official taking weather readings. I saw officials setting up gear to take readings at two other places on the course but no other media. Not sure what to make of that.

I did, though, see three of the men who will be trying to make the Tokyo Olympics marathon team at next month's MGC Race Olympic trials. Just past half an hour into the run I passed Fujitsu teammates Kengo Suzuki and Kohei Ogino, both longshots, heading the other way toward the short uphill section around 40 km. An hour later after going through the Asakusa turnaround I passed one of the four heavy favorites to make the team, 2018 Fukuoka International Marathon winner Yuma Hattori from the Toyota team, on his way up to Asakusa followed by a support staff member on a bicycle. Next Friday, a year out from the men's marathon, there are bound to be even more out there.

I didn't see any of the women who'll be running the MGC Race, but you know that they're out there too, spending time on the course, getting a feel for running it in the same kind of conditions a year from now. You can be sure that every person who makes the Japanese team will be totally prepared to handle the conditions the best they can. This is a home soil Olympics and one of the medals the home crowd cares the most about somebody winning. This one's for all the marbles. If you're reading this and are planning on being in either the women's or men's races, you'd better be ready too.

The tentative plan right now is to head back out Monday morning and run the first 10 km to Nihonbashi and then from there back along the course to the finish, about 23 km, with a special guest. Next Friday with one year to go until the men's marathon I'll cover the entire second half from 20 km to the finish including the two out-and-back sections I cut today, maybe a little more. Last year there was a pretty big difference in the weather conditions on the two runs due to a typhoon passing through Tokyo a few hours before I started the men's marathon test run. This year we'll see how things shape up for what the men may be up against.

ken said…
Too bad they won't start the race at midnight.
Too bad the Olympics are being held in August rather than October. All for the sake of TV.
The lack of consideration for Olympic marathoners is appalling. LA, Barcelona, Atlanta, Athens, Beijing have all been hothouses. Some day an Olympic level competitor will die. How about moving the marathon to the Winter Olympics ?
August 3, 2019 at 10:40 AM

Anonymous said…
You can’t move the marathon to the winter. For the same treason x-country won’t be a winter sport. Hot weather benefits the sprints. The olympics isn’t all about the marathon (or is it?). It’s the Summer Olympics. It’s supposed to be hot. “For the sale of tv.” If the Olympics weren’t televised, they wouldn’t exist. The athletes aren’t amateurs anymore.
August 3, 2019 at 2:01 PM

Anonymous said…
Thanks Brett for another informative article. Tokyo 1991 WC and Osaka 2007 WC would be good competitions to study and compare, to see how those athletes coped with adverse conditions.
August 6, 2019 at 8:14 PM

Andrew Armiger said…
Love the Coolish plug, good fun. 😁
I probably missed it, will the MGC races be run on the Olympic route?
August 7, 2019 at 2:46 AM

Brett Larner said…
Same course as the Olympics but with a start and finish outside the stadium as it's not finished yet.
August 7, 2019 at 6:40 AM