The JAAF held a press conference on June 3 to announce the women's and men's fields for Japan's 2020 Olympic marathon trials, the Sept. 15 MGC Race. Following the announcement last week of the Japanese marathon teams for this year's Doha World Championships the complete entry lists for the MGC Race feature just 12 women and 31 men, of whom at least two will score places on the ultra-prestigious home soil marathon teams for the 2020 Tokyo Olympics.

With Daiji Kawai (Toenec) also named alternate for the Doha team the men's list could shrink to 30 if anyone in the Doha lineup gets injured, and there is a good chance that some people won't make it to the starting line. On the women's side nothing has been seen this year of Hanami Sekine, one of two runners from the Japan Post team to make the entry list, since a lackluster run at December's Corporate Women's Time Trials 10000 m. Mizuki Matsuda, also one of two Daihatsu runners on the list, hasn't been herself either since her 5th-place finish in Berlin last fall in 2:22:23.

On the men's side, Fukuoka winner Yuma Hattori (Toyota) missed most of his planned spring season due to surgery on his appendix, his training partner Chihiro Miyawaki has been out of sight since his 2:08:45 in Tokyo last year, and Ryo Kiname (MHPS) has been struggling since running 2:08:08 in the same race as Miyawaki. But regardless of the final start list numbers the MGC Race is going to be exactly what the Japanese public has always wanted to see: all of its top marathoners going head-to-head in an important race. No splitting up the pie between the three traditional qualifying races, just one race with everybody all in. 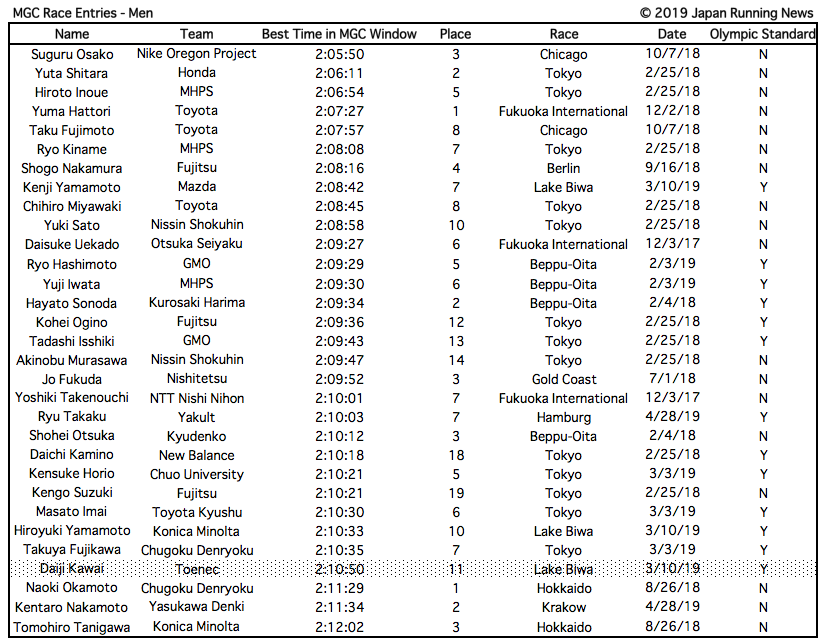 Well, almost. There is a backdoor option for the third spots on the Olympic teams if someone runs really fast in those traditional races during the 2019-2020 winter season. There's no chance that will happen on the men's side and not much on the women's, so realistically the MGC Race will determine the whole team. And with the IAAF's announcement of the Olympic standards coming well after much of the field had already qualified for the MGC Race there's a little more incentive for them not to let it be too much of a jog fest.

Of the ten men who qualified for the MGC Race under 2:09 only one, Kenji Yamamoto (Mazda), cleared the standard by doing it after Jan. 1 this year. The three top-ranked women all find themselves in the same boat. Yuta Shitara (Honda) will probably clear the 2:11:30 men's standard when he runs Gold Coast next month and there is the chance of doing another marathon next winter for anyone who doesn't have it, but the easiest thing will probably be for people to get it in the MGC Race itself, and that will mean at least a moderately fast-paced race whatever the conditions. Just over three months remain until the big day.