If there's one thing you can count on at Australia's Gold Coast Marathon it's the weather. Always beautiful, always cooperative. Not so this year, with powerful winds blowing from the south every day for the four days leading into the race. The winds had mostly died down come Sunday morning, but waves of rain still struck the area regularly until well into the afternoon. 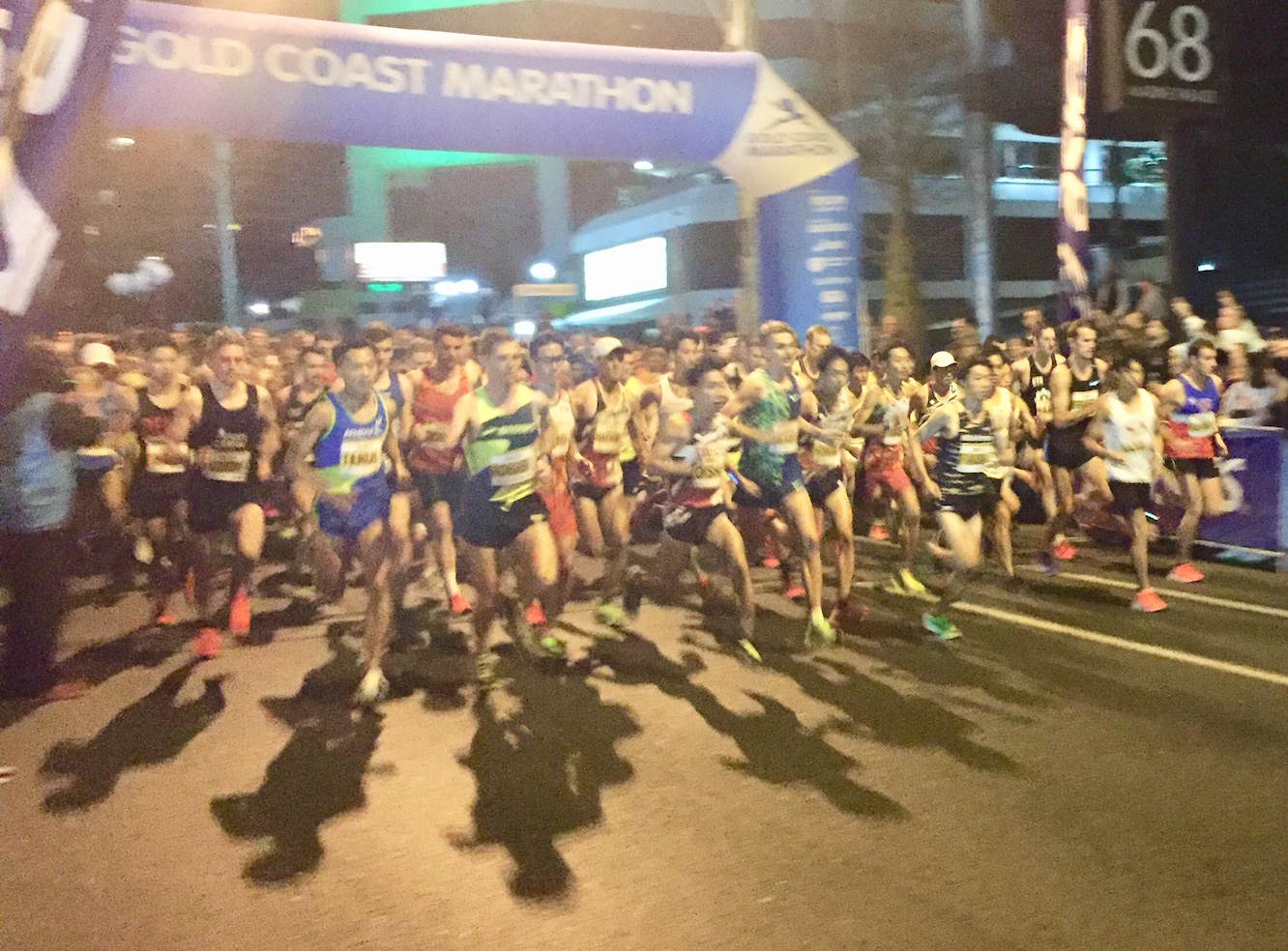 While the start and finish point of the half marathon remained ideal throughout the race, just a few km to the north runners were pounded by heavy rains that took a toll on the almost all-Japanese lead men's pack, heavily populated by aspiring Olympic marathoners tuning up for September's MGC Race 2020 Olympic marathon trials. In the end it came down to a trial between last year's winner Jack Rayner (Australia), last year's Fukuoka champ Yuma Hattori (Toyota) and former Hakone Ekiden star Yuki Sato (Nissin Shokuhin). Rayner bided his time before kicking away with ease in the last km to take the win in 1:02:30. Sato was next just off his PB in 1:02:36 despite the conditions, with Hattori happy with a 3rd place finish in 1:02:39.

Pre-race Zane Robertson (New Zealand) told JRN that he was ready to do "something special" in the Gold Coast Marathon. At the other end of the spectrum, Satoshi Ogawa, coach of half marathon national record holder Yuta Shitara (Honda), said that Shitara was running GCM mostly as a 40 km training run effort geared toward the Sept. 15 MGC Race. "The main thing is that he comes out of it without any fatigue or damage," he said.

From the start the two of them, one half each of the world's two best sets of marathoning twins, were the main protagonists, Robertson pushing the pacers to sustain to 2:07 pace to give him a shot at Australian great Rob de Castella's 2:07:51 Oceania area record and Shitara seeming to spend most of his time hovering off Roberson's shoulder. Some pre-race rain quickly caused Shitara's all-white singlet to chafe, leaving him with two growing red circles of blood of the front after just a few km. 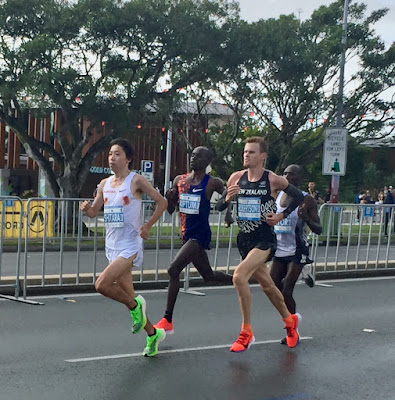 With the wind and humidity the fast pace was too much for most of the competition, and by 30 km it was down to just Robertson, Shitara and Kenyans Barnabas Kiptum and Vincent Yator. Yator was the first to drop, and around the 37 km turnaround point Shitara also lost touch. It looked it would be between Robertson and Kiptum, but as in his then-national record 2:06:11 last year in Tokyo Shitara returned.

Catching the lead pair at 39 km it was clear the winning time was going to be in the 2:07 range. Watching Shitara, coach Ogawa winced nervously as he told JRN, "He doesn't really need to be running this fast." At 40 km Shitara threw down, pulling away to win in 2:07:50, a new course and Australian all-comers' record by over 50 seconds. Kiptum and Robertson both went under Kenyan Kenneth Mungara's old record, Kiptum 2nd in 2:08:02 and Robertson taking 7 seconds off his twin brother Jake's Kiwi national record with a 2:08:19 for 3rd. 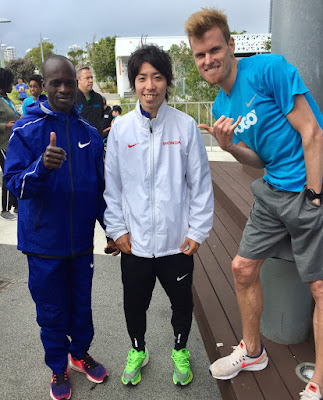 Along with his records today, Shitara became the 7th Japanese man ever to win a marathon outside Japan sub-2:10, and of the 17 Japanese men to have broken 2:08 he joined fellow national record breakers Toshinari Takaoka and Suguru Osako as just the third to do it more than once in his career. "I didn't have a race plan," Shitara told JRN post-race. "I just ran the race I ran. My training was good so the result reflects that. It felt easy through 30 km, but I got a bit tired after 35 km and lost touch with the leaders around the 37 km turnaround. But they came back to me and after that I just got into my rhythm."

Coach Ogawa told JRN, "This wasn't what I expected, so the most important thing now is recovery and regrouping for the MGC Race. We need to make sure there's no damage or lingering fatigue from this." Evidently that judgment came quickly, as just a few hours after the race Shitara announced on his Twitter feed that he'd be running the 10000 m at the July 22 Hokuren Distance Challenge Abashiri Meet in Hokkaido. You might think it was already crazy enough to have done something like this just two months out from the Olympic trials. But apparently you'd think wrong. It's a big enough question whether Shitara can turn it back around in time for Sept. 15, but beyond the Olympics Ogawa has his sights on one other big goal for Shitara. "I'd really like to see him win a World Marathon Major," he said. 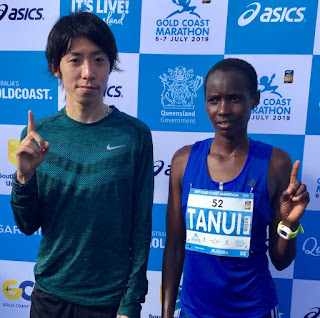 Robertson's wasn't the only national record of the day. In the women's race an all-African leading group in the early going boiled down to just Rodah Tanui (Kenya), who took the win in 2:27:56. Closing fast from farther back after a more conservative first half, Milly Clark (Australia) couldn't quite catch Tanui but took 2nd in 2:28:08. Behind her, Nazret Weldu Gebrehiwet led a string of national records with a 2:28:57 Eritrean NR for 3rd. Munkhazya Bayartsogt was 4th in a Mongolian NR of 2:29:18. Kit Ching Yiu 6th in a Hong Kong NR of 2:34:07. Anna Dagmara Handzlik 7th in a Cypriot NR of 2:34:17.

Whatever the challenges the day's weather brought the women seemed up to them, if not at the same absolute level as the front-end men then definitely relative to the level of the sport within each of their home nations. And as far off the beaten path as it may be, with three different nationalities on both the men's and women's podiums this year's Gold Coast Marathon genuinely represented the best of what the sport of marathoning can be, truly international and open to all comers to take their shot at making it their day. Here's to more like it.