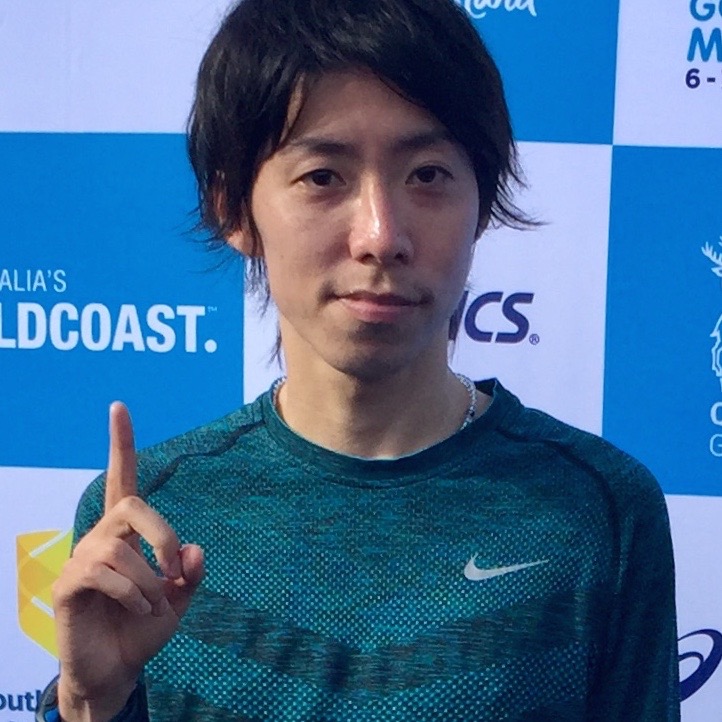 During the race Shitara suffered a mishap, bleeding from both nipples early on. "It rained right before the start," he said, "and once I started running it started chafing. I was a little worried about it, but if you want to compete at the top of the game then there are no excuses." Shrugging it off, even as his uniform soaked up the blood Shitara kept up his fast pace. "My training paid off in this result," he said with obvious satisfaction. "Winning gives me confidence, and I want to make good use of that after this."

Up to now Shitara has followed his own training program, never running longer than 30 km. But, having had problems maintaining his speed in the second half of the race, this time he increased his longest runs to 35 km starting in June. The results paid off on the Gold Coast as he was tough over the last stage of the race, pulling away for the win in the final kilometers. "In the training camp for this race I had the feeling that I could go 2:07," he said.

In the buildup to the MGC main event Shitara plans to begin training together with his twin brother Keita Shitara (Hitachi Butsuryu) in Hokkaido for ten days starting in late July. Keita, who starred at the Hakone Ekiden alongside Yuta during their days at Toyo University, didn't qualify for the MGC Race. But he will still play a valuable role as Yuta's main training partner like when the two of them were in university, dreaming of someday going to the Olympics as a pair. "We're going to win this together, the two of us," Yuta said. "At the MGC Race nobody's going to be able to say our training was a waste."

At the MGC Race Shitara will face the man who broke his national record, Suguru Osako (Nike Oregon Project) and other tough competition. But, he said, throwing down an intimidating challenge to them all, "I've got nothing but confidence that I'm going to win. Even if we ran it right now I'd win."

OWEN MCGARRELL said…
I have a feeling that Japan has placed so much emphasis on just making the trials race that the athletes who get selected will be too wrecked to perform to expectations in 2020. Plus if 'said' athletes don't win medals they will be national disgraces.
July 12, 2019 at 8:34 PM

Matt said…
@Owen... they have almost a year to recover from the selection race in September ...

I take it expectations are high but JAAF at least in recent times has been reasonable with its expectations.. as long as the Japanese runners beat everybody but the Kenyans and Ethiopians they'll be fine.

It is actually interesting that they moved the Olympic marathon to early morning to escape the heat, I would think a slower and tougher marathon in the heat might benefit the Japanese runners (whoever it might be) more...clearly they can't keep up with the sub 2:05 runners
July 15, 2019 at 11:34 AM