Just before the first wave of rain struck, Haruka Kitaguchi (Nihon Univ.), the only woman in the javelin throw to have cleared the Doha World Championships standard, opened with a national championships record 62.68 m that pretty much wrapped up her win. On her fourth throw Kitaguchi extended the record to 63.68 m, her final winning mark and securing her a place in Doha. In the final round of throws Yuka Mori (Nikoniko Nori) unexpectedly bettered Kitaguchi's first-round record with a PB of 62.88 m as the first few drops began to fall.

By the time the men's javelin got started it was a full on downpour, with race officials desperately trying to push a deepening puddle midway down the runway out of the way before each throw. Over the first three rounds many athletes slipped, Ayumu Ishiyama (Tiradrik) falling badly on his first throw to be knocked out of the competition. Over the first two or three rounds few throws went over 70 m, many falling shorter than Kitaguchi's winning mark in the women's javelin. But as the rain let up over the second half things got moving, and in the end favorite Ryohei Arai (Suzuki Hamamatsu AC) took the win with a throw of 79.42 m on his final attempt.

The rain also had an effect on the women's pole vault for everyone except winner Mayu Nasu (Run Journey). Right near the rain's peak Nasu somehow went near her PB, clearing 4.20 m with a scream of delight that could be heard at the opposite end of the stadium. Women's long jump winner Sumire Hata (Shibata Kogyo) also seemed unfazed by the conditions, jumping a PB 6.43 m (+0.3 m/s) to take the national title. 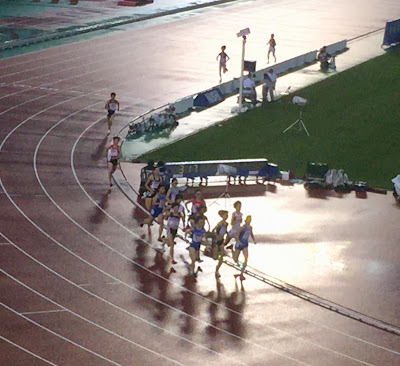 In the first of the first of the evening's track finals, last year's women's 1500 m runner-up Ran Urabe (Nike Tokyo TC) moved up to the winner's position, outsprinting #1-ranked Nozomi Tanaka (Toyota Jidoshokki TC) in the home straight to win the national title for the first time in 4:15.79. Last year's winner Tomomi Musembi Takamatsu (Meijo Univ.) ran a PB of 4:16.52 but finished only 4th. Urabe will race next month in Belgium in prep for a potential spot on the World Championships team.

One of the biggest stories of the day came in the men's 800 m. National record holder Sho Kawamoto (Suzuki Hamamatsu AC) led virtually the entire way, but in the home straight 17-year-old Allon Tatsunami Clay (Soyo H.S.) drew even, then went ahead, Kawamoto responded, but Clay got him in the end, breaking the high school, U20 and U18 national records in 1:46.59 to Kawamoto's 1:46.78.

The women's 400 m final nearly saw another high schooler score a national title. Clay's teammate Saki Takashima (Soyo H.S.) led the entire way, but in the final meters Seika Aoyama (Osaka Seikei AC) and Nanako Matsumoto (Toho Ginko) moved up to challenge her. Matsumoto was just short, but for Takashima and Aoyama it went to a photo finish, both clocking 53.68 and Aoyama declared the winner.

But there one more high schooler did pull it off. In the women's 100 m Midori Mikase (Eniwa Kita H.S.) barely got to the front of a blanket finish, bettering favorite Anna Doi (JAL) to win in 11.67 (+0.6 m/s). Three other high schoolers made the final, Hanae Aoyama (Osaka H.S.) taking 3rd in 11.73, which says something about the current state of Japanese women's sprinting.

The standing room-only attendance for the night's final event said even more about the state of Japanese men's sprinting. The track was too wet to produce the kinds of times people hoped to see in the men's 100 m final, but national record holder Abdul Hakim Sani Brown (Univ. of Florida) still gave people what they wanted, running a meet record 10.02 (-0.3  m/s) to beat Yoshihide Kiryu (Nihon Seimei) and Yuki Koike (Sumitomo Denko) for the win.

Sani Brown was disappointed with his time, saying afterward that while the second half of the race had been good he didn't know what went wrong with his slow start. All the same, with the Doha standard already under his belt the national title guaranteed Sani Brown his spot on the national team. Kiryu and Koike also have the standard, and while they won't be officially named until the final team lineup announcement in September their 2nd and 3rd-place finishes make it pretty well 100% that they will make up the 100 m squad.

The 4x100 m lineup is less certain. 200 m specialist Shota Iizuka (Mizuno) beat team regulars Shuhei Tada (Sumitomo Denko) and Aska Cambridge (Nike) for 4th in the final, and current Japanese #2 Ryota Yamagata (Seiko) was out of nationals with illness. Who ends up on the relay squad alongside the top three remains to be seen, but it's reassuring this distance out from the Tokyo Olympics that there are enough capable people for that to be a question.

The National Track and Field Championships continue through Sunday.