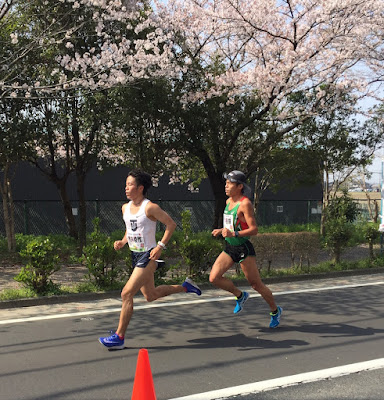 Under piercing sunlight on a warmer-than-usual day, Yuki Kawauchi (Saitama Pref. Gov't) won the Satte Sakura 10-Miler in Satte, Saitama in his final tuneup for this year's Boston Marathon.

The last time Kawauchi ran Satte back in 2012 he lost to a local Toyo University third-year by the name of Yuta Shitara. This time Kawauchi found himself up against another Toyo runner, second-year Ryoga Asai. In their last meeting at November's Ageo City Half Marathon Kawauchi outkicked Asai on the track to beat him by two seconds. This time the pair remained locked together almost the entire way, Asai doing most of the work with Kawauchi a step behind.


On the course's narrowest and most scenic stretch Kawauchi opened a gap on Asai, but in the final kilometers Asai worked his way back into contention. Coming onto the track with 300 m to go Asai made a move to get away, but Kawauchi responded with a sustained surge that carried him to the win in 49:17. Outkicked again, Asai was 8 seconds back in 49:25, the only other runner to clear 50 minutes.


After a quick cooldown Kawauchi returned to the track to cheer on finishing amateur runners, hi-fiving people coming onto the track for over half an hour before posing for pictures with a long line of fans. Post-race a pair of journalists from France's L'Equipe magazine who had travelled to Japan to interview Kawauchi talked to him in-depth, the first-ever foreign journalists to attend the rural Satte 10-Miler, much to the bemusement of race officials.


With a week and a half of training left before departing to the U.S. Kawauchi now turns his attention to the main race of his spring season in his upcoming appearance as part of the John Hancock Elite Athlete Team for this month's Boston Marathon.

I really enjoy reading your coverage of such passion that is known as Japanese running. I have noticed (Tokyo, lake biwa) several Japanese wearing the Nike Vaporfly. However I don't believe Yuki races in those as I believe those are Asics Stripes. Would you know what (model) Asics Yuki wears? I really wonder why a Sporting goods company doesn't market such a profound story like Yuki?? Thank you for your great efforts and coverage!
April 3, 2018 at 1:20 PM

Brett Larner said…
Kawauchi typically races in ASICS Sortie RP4. Due to his status as a government employee he is unable to have a contractual relationship with any sponsor. i'm sure ASICS and others would love to have that kind of relationship with him.

pedro serra said…
if you want to get a pair of one of that shoes just forget it if you want to run more that 10k. i order one pair in the black friday and try them on a 10k race. excelent i beat my time with 37min for 10km (was 38:10 min). than i try it with 21k after 11km i had to give up. it was hurting my legs and knee.

Brett i read that he doesnt want to have a sponsor so that he can buy what he want. but since he is in the national team he have to use asics :P

do you know what shoes he use in boston? it was not sortieMagic it another model. i went to asics website but i didnt saw any similiar model.

here is the photo of the shoes he used.