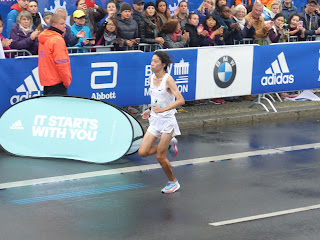 After a slow start to the year Yuta Shitara (Honda) exploded with one of the most memorable debut marathons in Japanese history, building momentum that carried him all the way to a half marathon national record and the top of JRN’s 2017 men’s rankings. 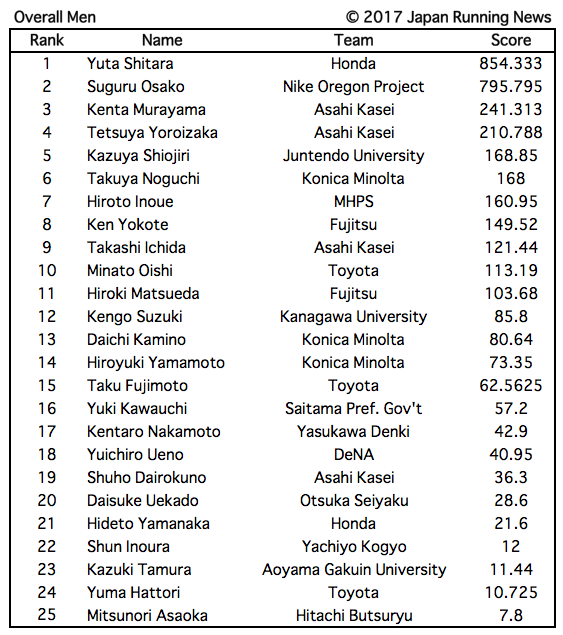 After a mediocre New Year Ekiden and a decent run at the Marugame Half, Shitara turned heads with a fearless 1:01:55 first half in his debut at February’s Tokyo Marathon. Shitara died a thousand deaths over the second half but still lasted to a 2:09:27, a promise of more to come. Track season was unremarkable, but entering the fall he planned to tune up for the Berlin Marathon with a 10 km and half marathon in the Czech Republic. After a 28:56 in Prague, Shitara shocked the country with a 1:00:17 national record at the Usti nad Labem Half, a seemingly suicidal move a week out from Berlin.

There he vowed to go out with top group Eliud Kipchoge, Wilson Kipsang and Kenenisa Bekele no matter what, and Shitara did his best to live up to that pledge. Running most of the race alone behind the leaders, a more conservative first half just under 63 minutes led him to a 2:09:03 PB, again seemingly with the promise of much more to come. Rallying from Berlin, Shitara dropped a 27:41.97 PB at November’s Hachioji Long Distance meet, the fastest 10000 m time of the year by a Japanese man and moving him up to all-time #12 on the Japanese charts. A week later he followed that with a 45:58 win at the Kumamoto Kosa 10-miler, moving up to Japanese #4 for the distance.

Based on his half NR Shitara has the potential to run 2:06:30 now, and maybe even faster. Sondre Moen’s disciplined pacing and self-control at Fukuoka was a role model to which Shitara should aspire. Based on his two marathons to date there’s no sign that he intends to approach the marathon with the same maturity and professionalism as Moen, but if he did there’s not much question he would be Japan’s best chance of seeing its 2:06:16 national record updated before Tokyo 2020. All the same, across a range of distances Shitara shone like no one else in Japan this year to fully earn the Japanese long distance man of the year title.

Basking in the glow of Shitara’s national record, other Japanese men delivered great performances this year too. Hiroto Inoue (MHPS) outlasted Shitara in Tokyo to run 2:08:22. Kenta Murayama (Asahi Kasei) dictated the pace at March’s NYC Half to break Shitara’s Japanese U.S. soil record in 1:00:57. Takuya Noguchi (Konica Minolta) became only the fourth Japanese man to win a marathon outside Japan sub-2:09 when he won July’s Gold Coast Marathon in 2:08:59. Kosuke Ishida (Asakawa J.H.S.) broke the junior high school 1500 m, 3000 m and 5000 m national records in three brilliant races over the fall. Suguru Osako (NOP) moved up to all-time Japanese #5 with a 2:07:19 PB at Fukuoka in December, following up his 3rd-place debut at April’s Boston Marathon to establish himself as a solid bronze medal contender for Tokyo 2020. All throughout the year, Yuki Kawauchi (Saitama Pref. Gov’t) did his thing, capping it with a negative split 2:10:03 win in Hofu two weeks after Fukuoka.

But for all the highs, there was a lot of disappointment. For the first time in World Championships history there were no Japanese men in either the 5000 m or 10000 m, Osako missing both qualifying marks, 10000 m national record holder Kota Murayama (Asahi Kasei) out with injury, and nobody else stepping up to take their places. In the World Championships marathon, neither Kawauchi nor Kentaro Nakamoto (Yasukawa Denki), Japan’s best championships racer of modern times, ran for a medal. Kawauchi seemed to completely lack the assertiveness he showed in two of his best races of the year, Gold Coast and Hofu. If Osako outshone his countrymen in any respect this year it was in his ability to stay in the race, even if he too lacked what it took to win it. Noguchi’s win over Kawauchi and defending champ Kenneth Mungara on the Gold Coast was virtually the only marathon performance that really bettered Osako’s pair.

With the hype and expectation surrounding the Tokyo 2020 Olympic marathon, seemingly every athlete of every age with any chance whatsoever obligated to say that their life goal is to win a gold medal in the marathon in Tokyo three years from now, apart from Noguchi there was nothing this year that showed there is even the slightest chance of that happening. The perpetual problems, the inability to set realistic goals, to be mentally competitive outside Japan, to run up to ability when it really counts, were there in spades. If Osako delivered a bronze medal, an entirely realistic goal, he’d be celebrated just as if he had gone one or two better, but there’s probably not much chance you’ll hear him say that’s a goal of his.

Likewise, at this stage there’s not much chance the JAAF will be able to do anything to turn things around, especially under the leadership of Toshihiko Seko. The new MGC Race Olympic trials format is a big step in the right direction, but it comes up short in two critical areas for 2020 success, identifying and cultivating athletes who can perform in heat and who know how to race no matter what the pace. Whether Shitara, Osako, Noguchi or any of the year’s other highlights are among those to make the team, these remain enormous hurdles to clear over the next couple of years for Japanese men to have even a sliver of the success the country expects of them. 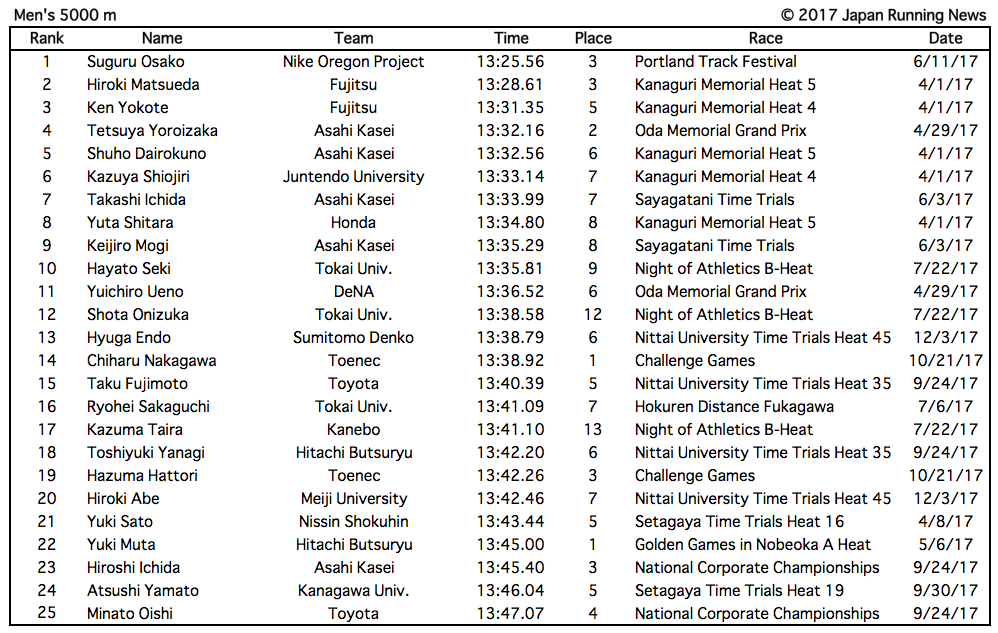 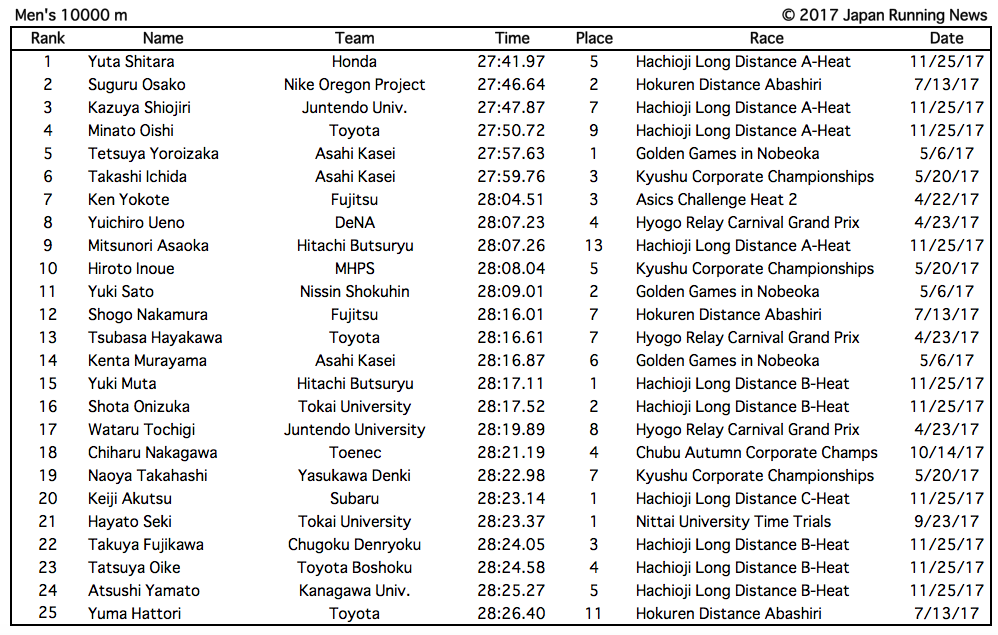 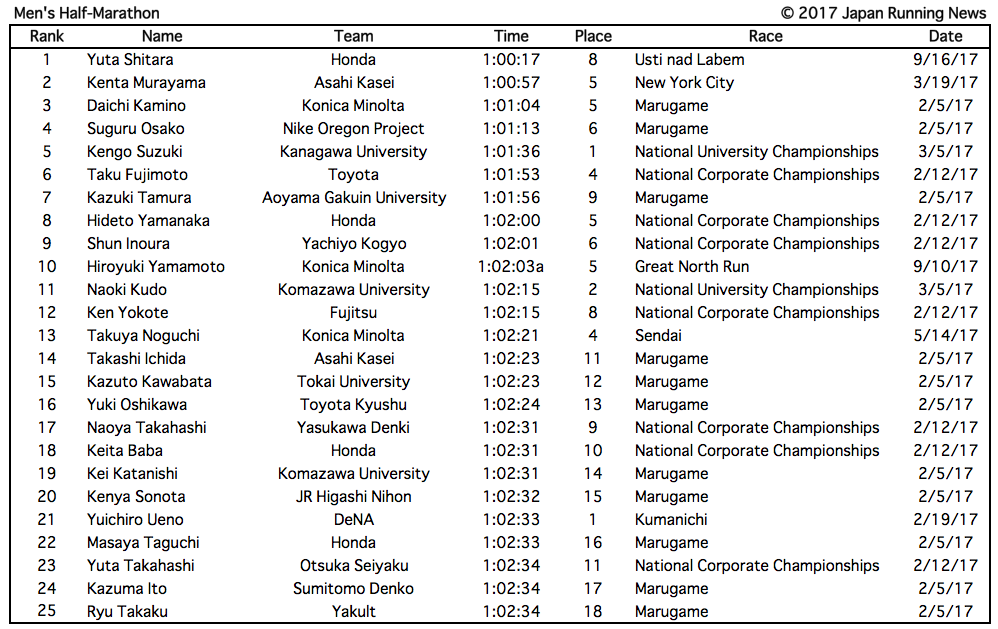 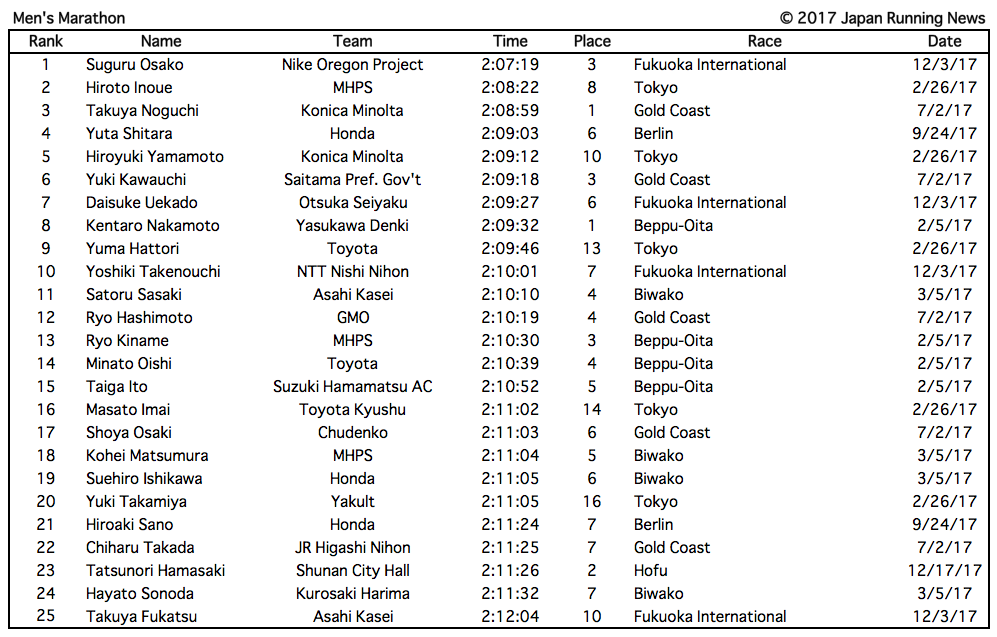