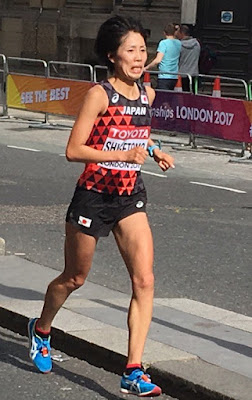 The Tenmaya women's corporate team announced on Dec. 19 that two-time World Championships marathoner and 2012 London Olympian Risa Shigetomo, 30, will retire from competition at the end of the season in March next year. A press conference is scheduled for Dec. 21.

As a third-year at Okayama's Kojokan H.S. in 2005 Shigetomo led the team to win its first-ever National High School Ekiden Championships title. She joined the Tenmaya team the following spring after her graduation. With a powerful stride driven by her tall 168 cm frame, Shigetomo won the 2012 Osaka International Women's Marathon in 2:23:23 to qualify for the London Olympic team. At the Olympics she finished only 70th in 2:40:06.

This year Shigetomo won Osaka for the second time in 2:24:22, earning a return trip to London for this summer's World Championships where she finished 27th in 2:36:03.

Translator's note: Shigetomo also ran in the 2015 Beijing World Championships, where she was 14th in 2:32:37. Through no fault of her own she was involved in a scandal surrounding the Beijing team selection after she finished as the second Japanese woman at the 2015 Osaka International Women's Marathon but was chosen for the team over the outright winner of one of the other selection races by a selection committee that included her coach Yutaka Taketomi. The apparent corruption led to calls for and an eventual, if still incomplete, move toward more transparency and objectivity in national team selection.