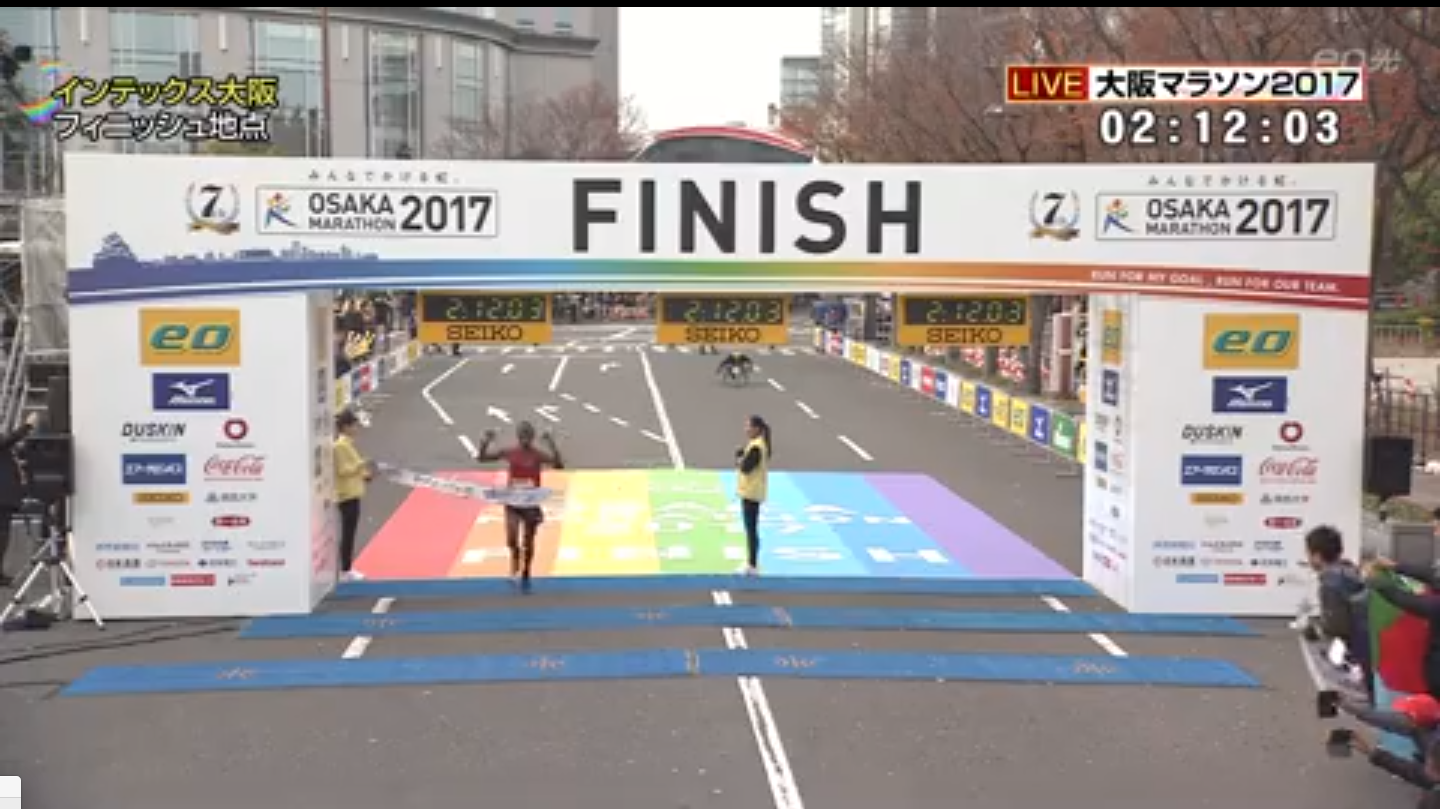 #1-ranked Kaleab Ghilagabr became the first Eritrean winner in the Osaka Marathon's short seven-year history, leading 29,359 finishers across the line Sunday in a PB 2:12:03, while club runner Yumiko Kinoshita (SWAC) had to run a minute-plus PB 2:34:38 to win an exciting battle between Japan's six best amateur women by 1 second.

Ghilagabr set off accompanied by unsponsored amateur Hideyuki Ikegami, an unusual independent who got attention by beating Yuki Kawauchi in a half marathon in 2014 and went on to be mentored by 2:07:48 Olympian Arata Fujiwara. In April this year Ikegami made his marathon debut at the Hannover Marathon but finished in a disappointing 2:30:15 that didn't reflect the quality suggested by his 1:03:09 half best and 1:31:53 PB for 30 km.

The pair ran 2:10:30 pace through 15 km, PB pace for both, before Ikegami began to slip. Ghilagabr pushed on alone, holding on to 2:10 pace until well into the second half before beginning to slow. Ikegami was caught by another Eritrean, Fikadu Kibreab, and looked like he would repeat his Hannover meltdown, but this time he whatever had been missing in his debut. Ikegami responded to Kibreab's pace and soon dropped him, beginning to edge back toward leader Ghilagabr. It looked as though he may have a shot at bridging the gap, but in the final 2 km he fell off pace to take 2nd in 2:13:41. 2:13:41, a PB by 17 minutes and the kind of run by an unsponsored amateur not seen since another iconoclastic independent made a dramatic breakthrough in 2011. Mark that name on your calendar. Hideyuki Ikegami.

Behind him, Kibreab faded into oblivion, run down by yet another Eritrean, Tesfamariam Gashazghi, who took 3rd in a PB of 2:19:34. Just behind him was one of the feel good stories of the year. Corporate leaguer Satoru Kasuya, a Komazawa University graduate who once anchored it to a Hakone Ekiden victory, ran 2:11:17 in 2011 early in his career as a marathoner, but over the two years following that he began to feel inexplicable weakness and other problems. In the summer of 2013 he was diagnosed with malignant lymphoma which ultimately proved almost fatal. Surviving his treatment, Kasuya was determined to make a comeback. In September, 2015 he ran his first race post-surgery, a 5000 m time trial. 5 months later he ran a 2:20:38 marathon in Tokyo,  following up with a 2:24:20 in Nagano this spring. Over the summer he was featured in a series of insurance TV commercials detailing his inspiring story. Today in Osaka he was 4th in 2:19:50. It may not be a 2:11, but a return to sub-2:20 after nearly dying ranks Kasuya's among the best performances in the world this the year.

Last year Yoshiko Sakamoto, a mid-30's mother of three who runs in her spare time, became the first Japanese athlete male or female to win Osaka, running a 2:36:02 PB to beat fellow amateurs Kinoshita, Hisae Yoshimatsu and Mitsuko Ino for the win. All four returned this year, with newcomer Marie Imada, Chika Tawara and Azusa Nojiri of the quasi-corporate league club Raffine, adding to the sub-2:40 competition.

Sakamoto took it out on mid-2:32 pace, something only last year's runner-up Kinoshita and 2017 Kitakyushu Marathon winner Imada could handle. Imada took over after 15 km, holding the pace down steady at mid-2:32 as the older Sakamoto and Kinoshita began to falter. After halfway the trio split apart, all three running equally spaced for almost the entire rest of the race with Ino and Nojiri hovering in the background.

Near 30 km Ino caught Sakamoto, but apart from that little changed until the final 5 km. Imada began to falter, giving Kinoshita the chance to close, and then catch her 2 km out from the finish. Kinoshita looked set to avoid a repeat of last year, but with a stunning kick after 40 km Ino came out of nowhere. Bearing down in the last straight it looked as though she would knock Kinoshita back to 2nd again, but Kinoshita found just enough to hang on, cutting over a minute off her best to win in 2:34:38. Ino was just 1 second behind her, a PB by 5 minutes.

Imada faded over the last 2 km but still cut almost 4 minutes off her best with a 2:35:13 for 3rd. Nojiri, Sakamoto and Yoshimatsu all cleared 2:38, maybe the largest number ever of Japanese amateur women under the IAAF bronze label standard in a single race. Combined with Ikegami's run on the men's side it was a brilliant day for independent-mined Japanese who do what they like because it's what they like to do. May there be many more.