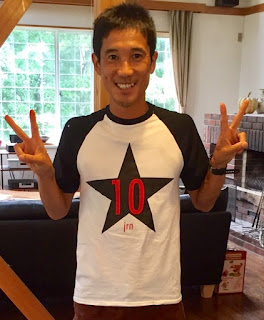 Priding itself on having one of the flattest courses in the country, the 37th Tsukuba Marathon took place Nov. 26 at Tsukuba University in Ibaraki. Just four weeks after a course record-setting win at the Toyama Marathon, 2012 London Olympics marathoner Arata Fujiwara, 36, won the men's race in 2:18:08.

With a 4th-place finish on the anchor stage of last year's Hakone Ekiden to his name, Akihiro Kaneko led a group of six through 30 km before the action began. "I didn't want to fall apart mid-race, so I was careful to keep it conservative and stay in the group," Fujiwara said post-race. At 39 km he suddenly took off without warning, running alone the rest of the way to the finish line. "I think my last kilometer was about 2:50," he said. His experience showed in the ease with which he put away the 23-year-old Kaneko and other younger athletes. "The time wasn't great, but it gives me hope for the future," Fujiwara smiled.

With regard to the future, Fujiwara said, "I'm thinking about whether or not to go train in Kenya again this year. It's far away, but training in Kenya is fun at its purest. I don't have a coach right now, but I'm doing most of my training with Hideyuki Ikegami in the Fujimi Highlands in Yatsugatake. Fujiwara is not actively looking for sponsors. "My thinking right now is that when I'm running in a way that's worth sponsoring then I'll think about it," he explained.

Asked about the 2020 Tokyo Olympics Fujiwara was enthusiastic, saying, "It's really interesting to compete with rivals for something where so few people can succeed, so I want to give it everything I can to be there." Hopes were high for Fujiwara at the London Olympics, but when they ended in failure for him Fujiwara frequently faced criticism and insults from people on the street, even in the middle of training.

Fujiwara was 2nd at the Tokyo Marathon three times, every time returning from prior disappointment to bring excitement to the crowds with his light and refreshing style. After he finished he was always mobbed by adoring fans who loved his heroics. For the record-setting 18,000 runners in Tsukuba, Fujiwara's latest resurrection seemed to be just as big a cause for celebration.