On Nov. 10 it was learned that Japanese citizens are unable to register for the Nov. 25 Beijing Marathon.  The reason for this is unclear, but according to Japanese government officials it is likely a retaliatory move by the Chinese government in response to Japan's recent purchase of the Senkaku Islands, known in China as the Diaoyu Islands, from a private Japanese owner.

The Beijing Marathon is an IAAF Gold Label event and is a member of AIMS.  It is unprecedented for a major race of this stature to exclude participants based on their nationality.

In registering for the Beijing Marathon on the official race website it is necessary to identify the entrant's nationality from a drop-down menu.  The option for "Japan" has been removed.  The organizing committee appears to be sending the message to any Japanese people interested in running that "Japanese citizens are not entitled to enter."


UPDATE: Hours after the Beijing Marathon's barring of Japanese entrants from this year's race scheduled for Nov. 25 became public knowledge in Japan, the organizers issued an explanation.  "This is in consideration of the safety of the runners," the statement said, confirming that their move is connected with the deterioration of relations between the Japanese and Chinese governments over the Senkaku Islands.  Japanese sponsors of the Beijing Marathon through last year's edition are entirely absent this year, and in addition to the barring of Japanese runners on the race website entry page, the Japanese-language section of the website that was in place last year has also been removed.

The Beijing Marathon takes place in mid-October each year but was postponed by police this year on short notice due to a Chinese Communist Party meeting.  On Nov. 7 it was announced that the race would take place on Nov. 25, with entries opening on Nov. 8.  A major anti-Japanese demonstration took place in Beijing on Nov. 9.  The barring of Japanese citizens from the marathon became apparent on Nov. 10.

UPDATE: The Japanese Embassy in Beijing has lodged an official protest with the Chinese Athletics Federation, saying, "Japanese entries should be accepted."

UPDATE: Word spread throughout the athletics world Nov. 10 of the Beijing Marathon's ban on Japanese entries.  Newly-appointed director of the Japanese Federation's men's marathon program and Team Asahi Kasei head coach Takeshi Soh, who finished 2nd at the 1985 Beijing Marathon, commented without surprise, "At that time there was a friendly atmosphere at the race.  It leaves me with very complex feelings to see that things have deteriorated to this point."

Many voices are questioning the organizers' decision to discriminate against entrants based on their nationality.  An official at the Japanese Federation said, "I don't know the reason for their action, but it is certainly not internationally acceptable to allow politics to interfere with sports.  Naturally, this is quickly going to become a matter of the utmost importance."  IAAF communications director Nick Davies has been in consultation with the Japanese Federation and others with regard to their official protests over the Beijing Marathon's actions.

A Tokyo Marathon Foundation official said that the Beijing Marathon's move to eliminate Japanese sponsors has been underway for some time, "but taking things to the point of banning amateur runners is a very critical line to have crossed."  In recent years top Japanese corporate runners have stopped racing at the Beijing Marathon.  The Japanese Federation has no hand in Japanese amateur runners' entries, but, says the Federation official, "We've had no communication whatsoever from the Chinese Federation.  We want them to fully inform us of the situation at the earliest opportunity."

Speaking on behalf of the countless amateurs impacted by the ban, marathon industry figurehead Tetsuhiko Kin commented, "The neutrality and egality of sport are fundamental, so this is an extraordinarily serious situation.  This race has a long and deep connection with Japan.  I think it is terrible for them to do this kind of thing at the amateur level."

UPDATE: Following official protests by the Japanese Embassy and others and intense online criticism of "narrowmindedness unbecoming an international-level race," late at night on Nov. 10 the Beijing Marathon began accepting entries by Japanese citizens.  With the IAAF taking steps to deal with the situation the Chinese side may also have feared that they had sparked a major international incident.  In interviews with Chinese media the event's assistant race director said, "The Beijing Marathon has consistently welcomed entrants of all nationalities.  We have not blocked Japanese citizens from entering."

UPDATE: Along with international outrage, voices saying that the Beijing Marathon had "gone too far" also spread within China to the point that race organizers could no longer ignore them.  Chinese social media site Weibo was alive with repostings of Japanese media coverage of the scandal and words of support.  Criticism such as "This is a disgrace to the streets that hosted the Olympic Games" and "The race organizers have something wrong with their heads" circulated one after another.  A professor at a government research institute commented, "We must immediately examine these policies that damage our own country."

Post-update note (a.m., Nov. 11): The online race entry system now includes Japan on the list of nationalities, but out of alphabetical order after Jordan.  See screen shot below.  Compared with the screen shots taken on Nov. 10 it is clear that the Beijing Marathon assistant race director's comments do not reflect reality.

(p.m., Nov. 11): This article quotes Chinese Athletic Association deputy director Shen Chunde as saying, "Beijing Marathon has never refused Japanese marathon fans to participate. Beijing Marathon has been open to marathon fans from every country and region all over the world since its inauguration. As far as last year's registration concerned, it was rare that Japanese runners signed up online individually. Basically they applied through Japanese enterprises. So this year, we remained to accept group registration because it is convenient for the Japanese participants to look after each other and also it is easy to handle in terms of picking up competition numbers and outfits. Therefore, there was no registration option for individual Japanese marathon fans. Since Japanese runners are enthusiastic and would like to apply as individuals, we will open this channel. Beijing Marathon, with openess, will always welcome runners from all over the world to compete, to experience an open Beijing, an open China."

Post-update note: The impetus for this is probably coming from the Chinese government rather than the race organizers themselves, but nevertheless it seems as though this should be sufficient grounds for the Beijing Marathon's loss of its IAAF Gold Label.  Surely the IAAF, AIMS and Adidas, a major player in the booming Japanese amateur market and sponsors of corporate and university teams including 2011 National Champion Team Daiichi Seimei and 2012 Izumo Ekiden course record-setters Aoyama Gakuin University, would not endorse this sort of politicization in their names.

Pre-update note: This story follows the AIMS-member Shanghai Marathon's expulsion of all its Japanese sponsors in September.  For years the Beijing Marathon has included elite Japanese runners and considerable numbers of Japanese amateurs in its field.  JRN has verified this article's assertion that Japanese citizens are unable to enter this year's race online through the Beijing Marathon official website.  Click screen shots to enlarge. 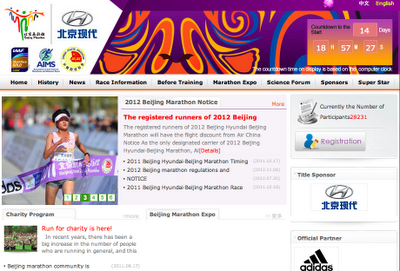 From the above front page, which prominently displays the Beijing Marathon's status as an IAAF Gold Label race and AIMS member along with the logos of major sponsors Hyundai and Adidas, clicking on the 'Registration' tab allows prospective entrants to create a profile. 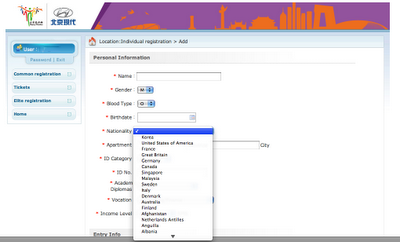 After creating a profile and logging in, prospective runners can enter. As indicated in the article above, the pull-down menu for nationality does not include Japan either among the major nations at the top of the list, in the photo above, or alphabetically between Jamaica and Jordan, in the photo below.  There is likewise no option for either Nihon or Nippon. 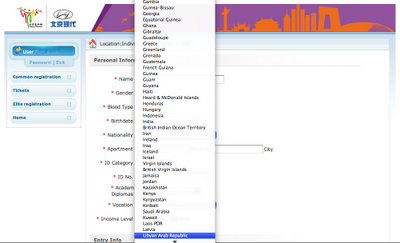 As of Nov. 11 the race entry site now includes an option for Japanese nationality. 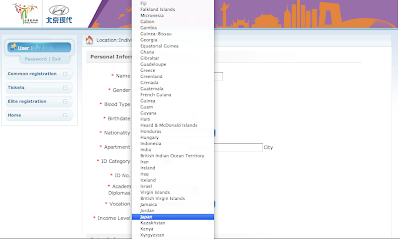 Anonymous said…
This is racial discrimination at its worst, linking a political issue to a sporting event, but then I'm not surprised as it comes from a regime that has always linked sports to politics. I really can't see this as an IAAF-sponsored event.
November 10, 2012 at 5:54 PM

Samurai Running said…
Reckon Japan should protest this, but do nothing to ban Chinese runners in Japanese marathons. Just make sure the world knows about it and leave it at that.

This shows a level of stupidity that people need to be aware of and the Chinese themselves need to know that no other country would consider such a unfair and provocative act!
November 10, 2012 at 7:52 PM

Anonymous said…
Down with Evil communist backward thinking Sino.
November 11, 2012 at 7:22 AM

Joe, Shanghai said…
Although this is the highest publicity race, along with Shanghai, the banning of Japanese runners in races throughout China has been the rule since the Diaoyu Island fiasco. It is entirely politically motivated and I hope that IAAF and AIMS strip Beijing of its official label for their actions. All of us in Shanghai are on pins and needles waiting to see what will happen. Many of the races that have banned Japanese have announced it only a day or two before the event. Really a shameful situation and the Chinese government should be called out publicly for it.
November 12, 2012 at 1:55 PM

noncoupable said…
What's most interesting about this is not the link between sport and politics per se - indeed that has been a feature of Olympic sport since forever - but the fact that this is happening at the amateur level. A marathon encourages ordinary people to sign up and participate, people who do not necessarily go to represent a country. I am not precisely sure what it is that either the athletic organization or the government would be trying to accomplish with this because it's not like these are necessarily high-profile athletes we're talking about.
November 14, 2012 at 1:33 AM