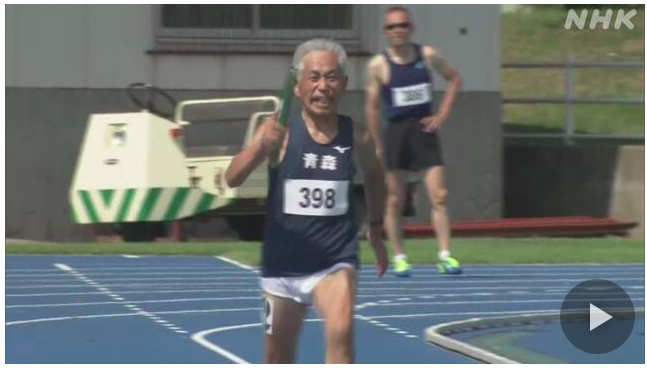 At a track and field meet over the weekend, a relay team made up of four men in their 90s living in Aomori prefecture set new 90+ age group world records for the 4x100 m and 4x400 m. Meet organizers are applying to have both records officially ratified. 130 people from age 23 to 92 took part in the Aomori Masters Track and Field Championships on Aug. 29 in Hirosaki, Aomori. Among them were the relay team made up of Aomori natives Matashiro Suruga, 92, Yuzo Kudo, 92, Kozo Mitsuya, 90, and Hiro Tanaka, 90.
Despite temperatures that rose to nearly 30˚C, the team members exhibited smooth baton work as they ran 1:43.69 in the 4x100 m. Their time took almost 40 seconds off the previous M90 record of 2:22.37.
Just two and a half hours later the Aomori team took on the 4x400 m. In front of strong crowd support they clocked 9:56.36, bettering the previous record set by an American team in 2014 by around 2:45. In May this year the same Aomori team had run 8:49.01, but because they were the only team of any age class in the race that performance was ruled ineligible for recognition as a world record. This time organizers were careful to meet all conditions for world record status and will apply to the Japan Masters Athletics Union for certification.
Lead runner Suruga, who has celebrated his 92nd birthday since May's race, commented, "The four of us all worked together to get these records. Running is a lot of fun, and I want to keep doing it until I turn 100."
source article:
https://www3.nhk.or.jp/news/html/20210829/k10013231221000.html
translated and edited by Brett Larner