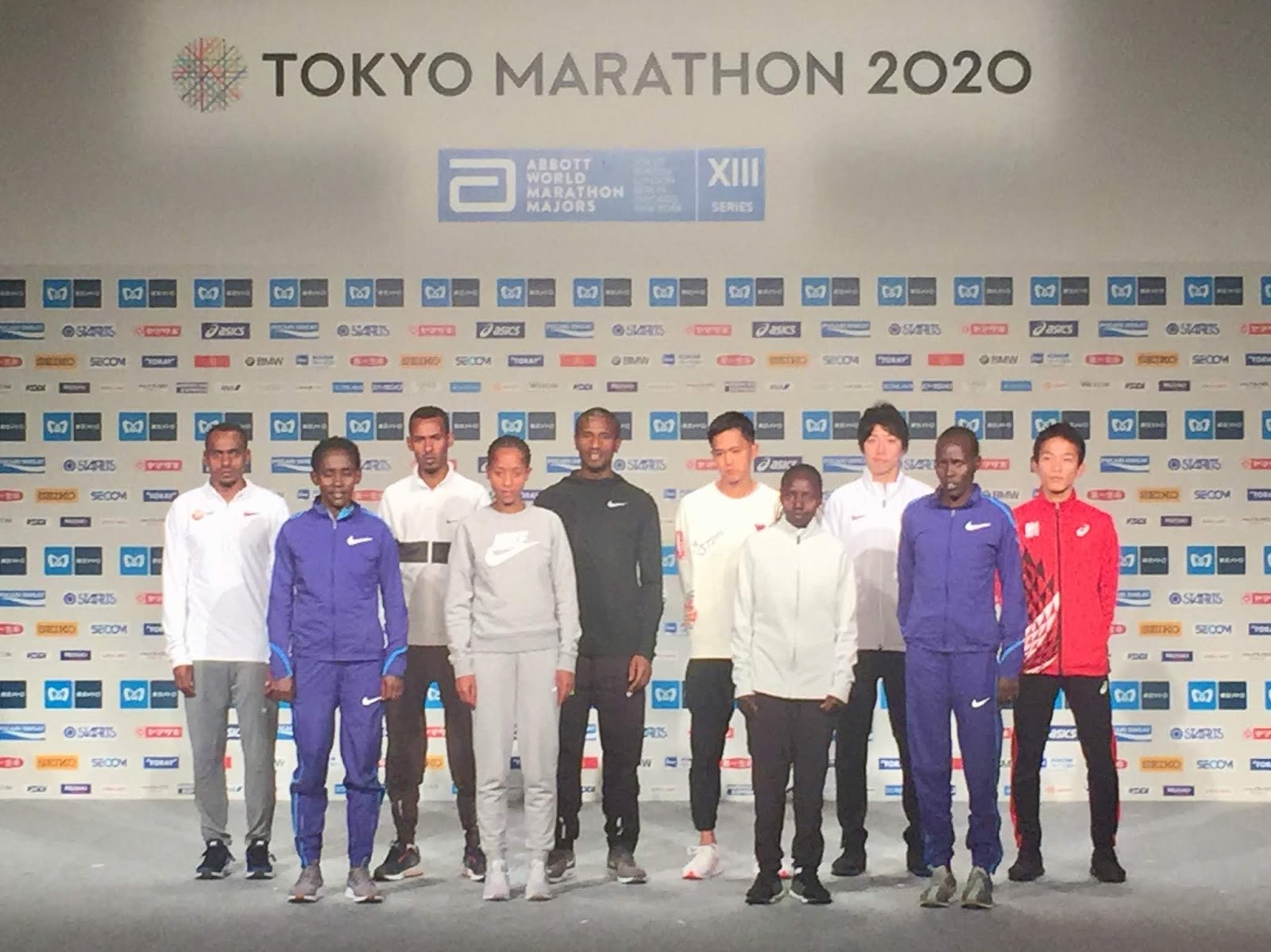 Having already eliminated its mass-participation field and over 90% of its staff and volunteers in a pre-emptive bid to stay ahead of the coronavirus situation, with just a couple of days to go the JAAF confirmed that Sunday's Tokyo Marathon would be a go. 24 hours later race director Tad Hayano kicked off the elite race press conference by talking about the difficult position the event is in but expressing optimism about the different races encapsulated in Sunday's marathon. They'll all be broadcast live in 117 countries around the world. A few words on each of them:

Women's Wheelchair
This was hit hardest by withdrawals, with seven of the ten women scheduled to compete pulling out including top three-ranked women Manuela Schar (Switzerland), Tatyana McFadden (U.S.A.) and Susannah Scaroni (U.S.A.). That leaves #4-ranked Tsubasa Kina (Japan) in the top spot and ready to take advantage of the wheelchair division prize money being doubled this year with additional bonuses for fast splits mid-race. She, Christie Dawes (Australia) and Yurika Yasukawa (Japan) just have to finish to pick up a pretty good payday, but that didn't stop Kina from saying she'd be aiming to break the 1:40:08 event record.

Men's Wheelchair
There were a few high-profile pullouts in the men's field and last year's winner Marcel Hug (Switzerland) was nowhere to be seen at the press conference, but from the way the up-and-coming Tomoki Suzuki (Japan) and veteran Kota Hokinoue (Japan) were talking it should still be a good race either way. Suzuki has already qualified for the 2020 Tokyo Paralympics and set a target of a 1:24:00 course record. Hokinoue has yet to qualify and said he wants to go 1:23:59. A few others on the entry list have the potential to match that kind of speed, so it could be a pack race until the cobblestoned last kilometer.

The big four all said they were looking at the 2:19:47 course record set in 2017 by the since-disgraced Kenyan Sarah Chepchirchir, predicting times from 2:18:30 in Dibaba's case to 2:19:30 in Aiyabei's. Hayano promised pacing at 3:18/km, targeting 2:19:15 to help them get there. Both Aga and Aiyabei said they had recent minor injury issues, while Salpeter emphatically contextualized her appearance in Tokyo in terms of a preparatory run for the 2020 Olympics.

Japanese Women
As Tokyo doesn't count in Olympic qualifying for Japanese women, there aren't any top-tier names in the field. The strongest is amateur Haruka Yamaguchi (AC Kita), who hopes to break 2:26 after running a PB of 2:26:35 in Osaka in January. Withdrawals include last year's Hofu Marathon winner Hisae Yoshimatsu (Shunan City Hall) and 2017 Osaka Marathon winner Yumiko Kinoshita (Tokyo T&F Assoc.). The absence of high-level amateur men due to the coronavirus situation makes this year a very different kind of race for the women at this level.

International Men
This is a good field to be sure. Last year Birhanu Legese ran a quality 2:04:48 in cold rain to win Tokyo, then went on to finish 2nd behind Kenenisa Bekele in Berlin in 2:02:48. Taking 3rd in Berlin in 2:03:36 and likewise lining up in Tokyo, Sisay Lemma (Ethiopia). Winning Dubai in 2:03:34 in his debut the same year, Getaneh Molla (Ethiopia). Seven others with recent times in the 2:04 to 2:05 range in the last three years including past champ Dickson Chumba (Kenya) and longtime Japan resident Bedan Karoki (DeNA).

The unusually articulate Lemma confidently said he would be targeting 2:02:00, well ahead of Hayano's tentative plan of pacing at the 2:55~56/km level, low 2:03 pace. Legese and Molla seemed more comfortable with that kind of race than with what Lemma wants, predicting times of 2:03:30 and 2:03:55.

Japanese Men
The main event? National record holder Suguru Osako (Nike) currently sits in a tentative seat for the 2020 Olympic team after finishing 3rd at September's MGC Olympic trials. To replace him, another Japanese man will have to beat his 2:05:50 national record. To stop them, he'll have to go at least 1 second faster than they do. It's a pretty good script, especially since there's a good chance it could happen given who's there.

Repeatedly directing the room full of journalists to his subscription social media service for more detailed answers, the Federico Rosa-represented former Nike Oregon Project member Osako said he's confident he could better his own record but declined to commit to a specific time when asked to do so by race organizers. Asked by government broadcaster NHK about the contribution his choice of footwear might make, Osako flat out dismissed the question, saying, "Yeah, that? They said we don't have to answer questions about things other than the race." Waving at the other five Japanese men onstage he added, "I think the rest of them feel the same."

Previous national record holder Yuta Shitara (Honda) was also reluctant to really commit to a hard number, saying that he doesn't have a specific race plan or target time in mind and that he races by feel without thinking too deeply about it. "Since the New Year Ekiden my training has been good," he said, "but in my tuneup races I got beaten by college kids and some other corporate league runners, which I'm not happy about. But I'm basically in as good shape as two years ago." Pressed for a target time he said 2:06:10, one second faster than his old national record and PB. "That's a minimum goal. I've always gotten a lot of energy from the amateur runners and people along the course cheering for me. Not having them there will be different, so I want to do something that will turn around the disappointment of everyone who didn't get to run."

Last at the MGC trials, Hiroto Inoue (MHPS), who ran 2:06:54 in Asics behind Shitara but switched to the same shoes Shitara and Osako use during the last season, expressed a similar sentiment about all the amateurs who won't get to run, but was a lot more decisive about his goals. "2:04:30," he said. "Part of me wants to go with the front group, but I think 2:04:30 is realistic. I don't like comparing to the past, so I'll just say that everything is good, my training went well, and I'm ready to make up for the weakness I showed at the MGC race."

Among the other Japanese men, sub-61 half marathoner Kenta Murayama (Asahi Kasei) was most confident about being able to tackle the big three, telling JRN that he was 100% ready to go with them in the second group, which Hayano projected to go at 2:58/km, 2:05:11 pace. A few others including Kenji Yamamoto (Mazda), Yuki Sato (Nissin Shokuhin), Daiji Kawai (Toenec) and Shuho Dairokuno (Asahi Kasei) also said they'd go with the second group, while others such as 2019 Asian champion Daichi Kamino (Cell Source), last year's top Japanese man Kensuke Horio (Toyota) and newly-crowned half marathon national record holder Yusuke Ogura (Yakult) were a little more realistic, all indicating they wanted to run their own races around the 2:08 level. Ogura in particular was relaxed, saying that he doesn't feel any pressure because of his NR or by the scale of running in Tokyo, and citing that as one of his biggest advantages.

At the moment weather conditions in Tokyo for Sunday morning are looking pretty good, with cloud cover breaking up into sunny skies as the race progresses, and temps between 10˚C and 13˚C. Maybe the only minus that might impact the kind of times Hayano hopes to see would be a moderate north wind, providing a tailwind over the middle section of the course but switching to a headwind over the final kilometers after the last turnaround by Shinagawa Station. Without the masses, and with spectators being encouraged to stay home and watch on TV to avoid coronavirus exposure, it'll be a different vibe, one that throws back to Tokyo's predecessor, the elite-only Tokyo International Marathon. It's hard not to see at least a few of the races playing out as hoped, but whatever happens the outcome for this summer's Olympics remains to be seen.