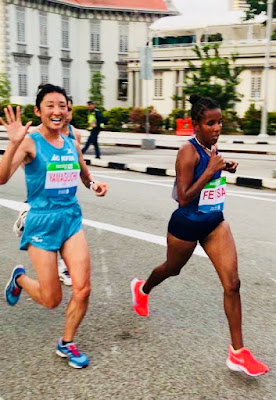 The Fukuoka International Marathon and Osaka Marathon were the two big headline-makers on the Japanese scene this weekend, but they were far from the only action to be had.

Just 13 days after running a four-minute CR of 2:27:39 to win the Kobe Marathon, Haruka Yamaguchi (AC Kita) ran the first nighttime edition of the Singapore Marathon. Starting conservatively, Yamaguchi moved up through the field mid-race to be in four-way contention for 3rd place. In the last dash to the finish she ended up 5th in 2:37:29, the fastest time ever by a Japanese woman on Singaporean soil by almost 10 minutes. Among those she beat was Ethiopian Aberash Feysa, who outkicked Yamaguchi for the win at June's Stockholm Marathon.

At Tokyo's Minato City Half Marathon, last year's winner Shiho Kaneshige (GRlab Kanto), who finished 5th behind Yamaguchi two weeks ago in Kobe in a PB of 2:31:56, dropped another PB as she won in 1:13:30. 2019 Doha Asian Championships 10000 m silver medalist Hitomi Niiya (Nike Tokyo TC) ran her first half marathon since 2008, jogging it as a training run with no official time recorded.

Metts said…
Brett, what is the difference between clubs like, Toyota Jidoshokki TC and AC Kita, and the corporate teams? Are the clubs mostly amateur with sponsorship? I notice Nozomi always wearing NB lately and Yamaucuchi, usually wearing Asics, as you said before, but I'm not sure about this photo?
December 2, 2019 at 11:20 AM

Brett Larner said…
Club teams are kind of an umbrella for anything outside the corporate leagues. In the case of AC Kita, it's a purely amateur club. It has some involvement with blind marathoning as a source of guide runners but is otherwise amateur. Yamaguchi runs in Asics by preference. TJTC and Nike Tokyo TC are semi-pro teams with sponsorship but outside the corporate league structure. Their runners are essentially pros but aren't part of the corporate team system. In the case of TJTC it's a little ambiguous as part of the sponsorship is from the TJ corporate team, but the runners are not part of its ekiden team and train independently.
December 4, 2019 at 12:47 PM