The 2020 Olympic Trials Qualifiers and the New Olympic Standards

Sunday's Nagoya Women's Marathon and Lake Biwa Mainichi Marathon pretty much wrapped up qualification for the Sept. 15 MGC Race, Japan's new 2020 Olympic trials in the marathon. There's still a chance for people who haven't qualified yet to get in if they can clear the wildcard standards, 2:24:00 or a two-race 2:28:00 average for women and 2:08:30 or a 2:11:00 average for men, by the end of April. At least two men with good chances of making it, Kenta Murayama (Asahi Kasei) and Asuka Tanaka (Hiramatsu Byoin), are planning to race again in April to try to go that route, and there will probably be others. But realistically the numbers of qualifiers probably won't change too much from what they are now.

As of the end of Sunday's races, 14 women and 30 men have qualified. On the women's side, the Tenmaya corporate team, the most successful at putting women on national teams in the marathon, has produced the most qualifiers with three, Honami Maeda, Mizuki Tanimoto and Rei Ohara. On the men's side, both the MHPS and Toyota teams have put three athletes into the MGC Race, MHPS with Hiroto Inoue, Ryo Kiname and Yuji Iwata, and Toyota with Yuma Hattori, Taku Fujimoto and Chihiro Miyawaki. The Asahi Kasei team, the most old-school marathon powerhouse in Japan and the three-time defending New Year Ekiden national champion, hasn't qualified a single athlete. All its hopes now lie with Murayama. 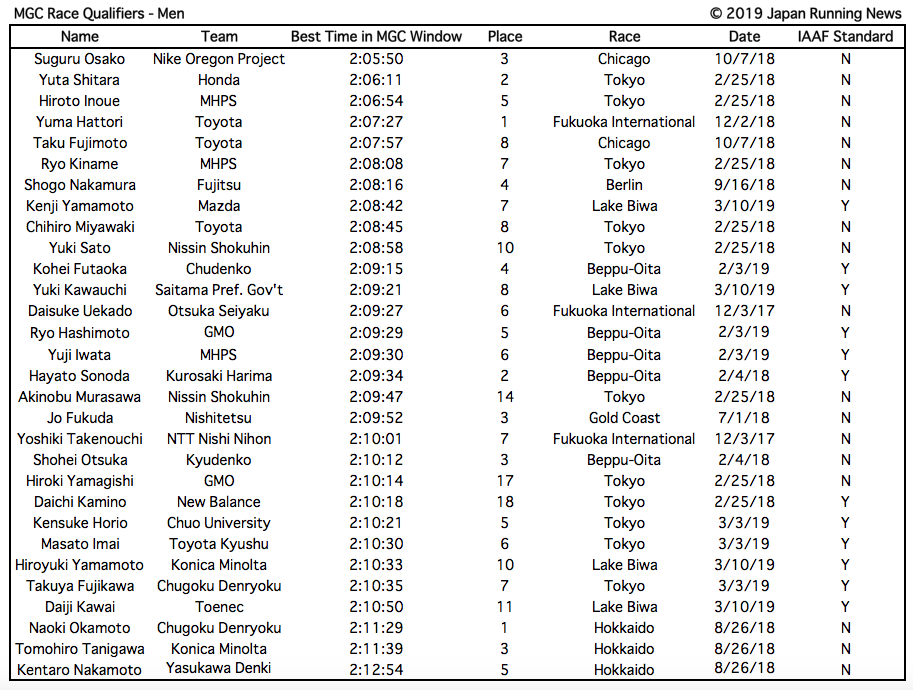 Right after Nagoya and Lake Biwa came news of the announcement of the IAAF's new qualifying standards for the 2020 Tokyo Olympics. To be sure to qualify women must clear 2:29:30 and men 2:11:30 or one of a few options based on placing in high-level races on or after Jan. 1, 2019. Otherwise it will come down to their position in the IAAF's just-officially-launched world rankings. What's the upshot for the 44 women and men currently set to run the MGC Race, where the basic idea is that the top three will make up the Japanese team for its home Olympics?

8 of the 14 women and 12 of the 30 men have cleared the IAAF Olympic standards, so they'll be safe in any case. But the 3 fastest women and 9 of the 10 fastest men haven't, all of them having qualified for the MGC Race in 2018. If they or any of the lower-tier qualifiers who haven't cleared the IAAF marks make the Japanese team they'll have three options:
The uncertainty does affect the excitement of Japan's first modern stab at having all its best people line up for a clear-cut trials marathon. But for the time being what's next is the final list of qualifiers after the Apr. 30 deadline for last-ditch attempts to make the cut.

Anonymous said…
Do you have a take on why twice as many men qualified as women? Easier standards? Luck with the weather? Deeper field?
March 14, 2019 at 1:39 AM

Brett Larner said…
When they set the qualifying standards they set them relative to the national records and said the women's were easier, i.e. using the wildcard standards they were about NR +2 min / +5 min for men and +5 min / +9 min for women. But if you look at them relative to the IAAF label standards that were in place at the time, i.e. relative to international competitive level, they were about gold label -1.5 min / silver label -1 min for men but gold - 3 min / silver -4 min for women. The result is pretty clear. If the women had had equivalent standards relative to label standards the numbers of qualifiers would have been closer to parity.
March 14, 2019 at 6:45 PM