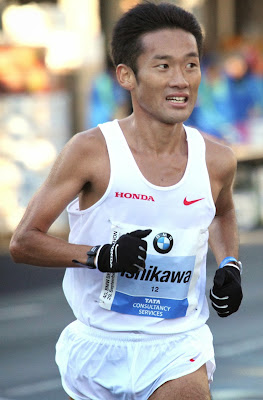 "Since I started running high school it's been 24 years," said Ishikawa at the press conference. "I've been with Honda for 17 years, and I made it all the way to the top, the Olympics. I'm glad that I've kept going this long. I thank you all."

Ishikawa ran the Mar. 10 Lake Biwa Mainichi Marathon but dropped out after only 10 km. It was to be the last race of his career. "It was the first time in my career that I'd ever DNFd, and I thought, 'OK, this is where it ends,'" said Ishikawa. Shortly after the race he made the decision to retire.

Beginning in April he will become an assistant coach with the Honda team. Head coach Yosuke Osawa, 51, will also retire, with assistant coach Satoshi Ogawa, 41, taking over as head coach. Osawa will remain on in an advisory position.