Storylines and Subplots at the 2019 Tokyo Marathon 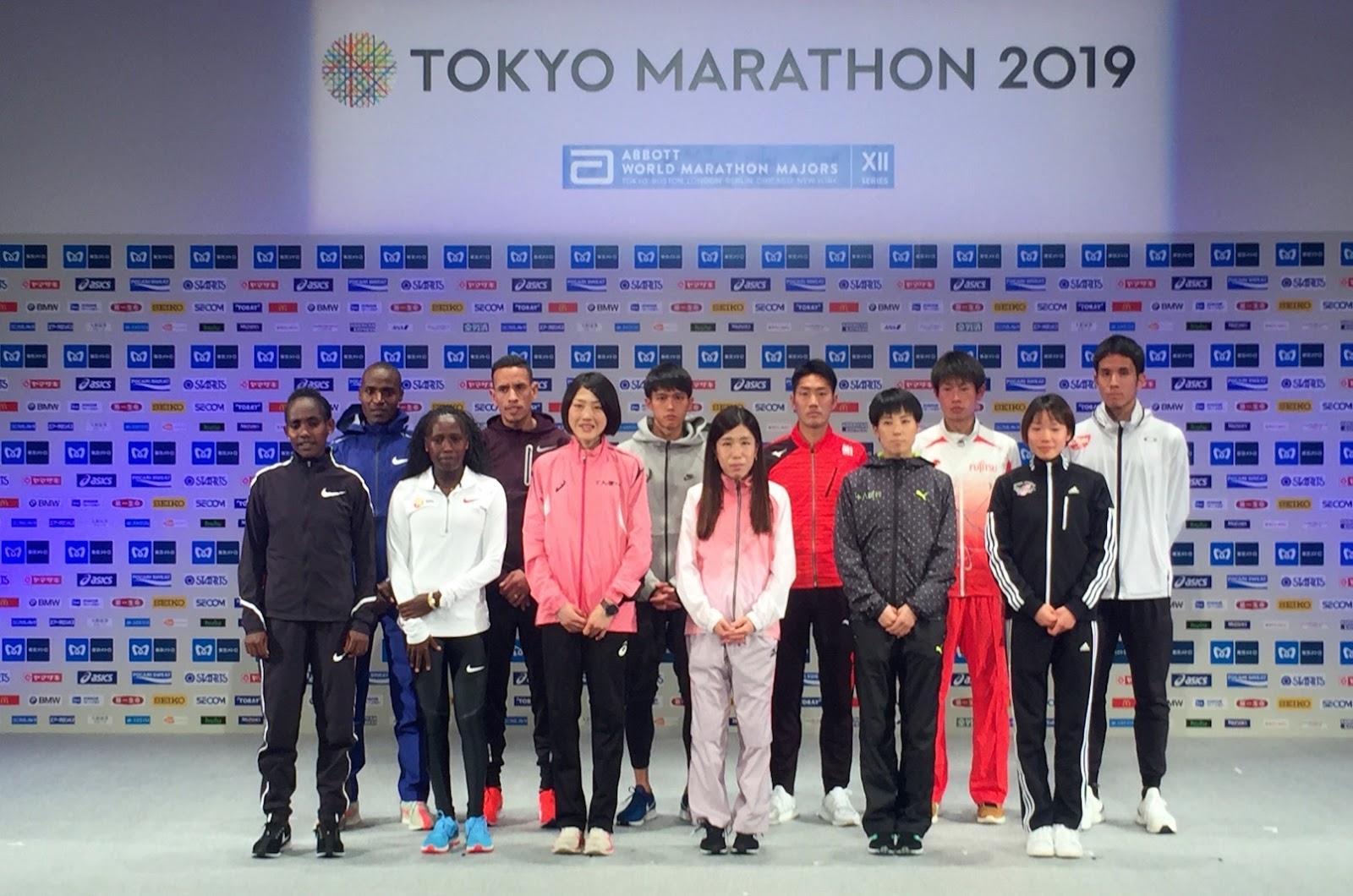 The 2019 Tokyo Marathon is this Sunday. Storylines and subplots of this year’s race:

The Tokyo Marathon has its roots as an elite men-only race. It’s taken twelve years since 18-year-old Hitomi Niiya became its first female winner, for no prize money or recognition (“I got a nice finisher’s medal” she told JRN last week), for the Tokyo women’s race to get up to parity with the men’s. It’s been a slow, step-by-step process, but this year at last parity has been achieved. If anything the women’s field is better than the men’s. Even before the withdrawal of the top two men there were more high-level international women in the field than men, and that’s even more so now.

Ethiopian power trio Ruti Aga, Boru Feyse Tadese and Yebrgual Melese all have the skills to better Sarah Chepchirchir’s 2:19:47 course record and its likely replacement, last year’s 2:19:51 win by Birhane Dibaba, Aga talking 2:18:30 at the pre-race press conference. But with six other women in the field with recent marks under 2:23, debuting 65-minute half marathoner Joan Chelimo Melly and a planned 2:21:21 pace for at least the second group to keep everyone together it’ll be the deepest women’s marathon ever held on Japanese soil whatever happens. They won’t have a separate start and it’s still a question mark whether they’ll get equal treatment on the TV broadcast, but this year marks a major step forward all the same.

And for the first time Tokyo will have top-level Japanese women. Because of its roots as an elite men’s race Tokyo has never counted directly in women’s national team selection for World Championships or Olympic teams, and with the Nagoya Women’s Marathon just a week later TV broadcast marketing concerns have helped to keep Japan’s best away. But with the shift in focus for Japan’s new MGC Race 2020 Olympic trials race qualification system things have changed. Even with the withdrawal of 2:21:36 runner Yuka Ando (Wacoal) with injury it’s the best Japanese women’s field Tokyo has ever had, even if it comes at the expense of the front end of the Nagoya field.

2:23:48 runner Honami Maeda (Tenmaya) and 2018 Asian Games silver medalist Keiko Nogami (Juhachi Ginko) have already qualified, but three other high-level women will be trying to seal up their trials qualification before the window ends at the end of April. Yuka Takashima (Shiseido) has the easiest day of it, only needing to run 2:29:47 to meet the two-race sub-2:28 average option for qualifying thanks to a 2:26:13 debut in Paris last year. Nevertheless she’s talking 2:21. Mao Kiyota (Suzuki Hamamatsu AC) has run 2:23:47 before and needs a 2:27:02 to qualify. Debuting Mao Ichiyama (Wacoal) has the toughest task ahead of her, having to clear 2:24:00 to meet the single-race qualifying option, but at the pre-race press conference that didn’t seem to faze her as she put up a 2:21 prediction alongside Maeda and Takashima. If any of them succeed they’ll bring the number of women who will line up at September’s MGC Race into the double digits. 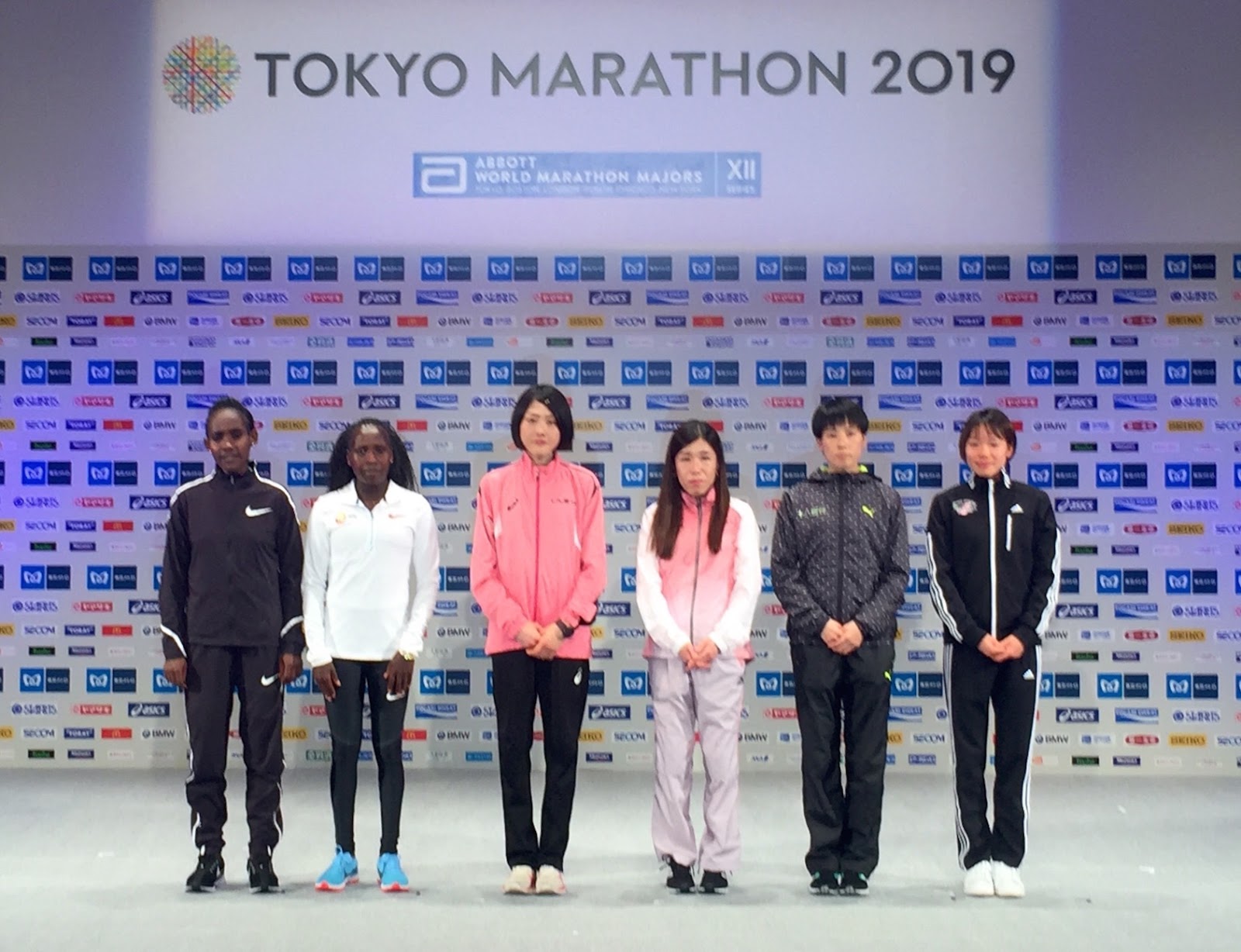 The withdrawal of top two seeds Kenenisa Bekele and Marius Kipserem with injuries hurts the men’s race, no way around that. But there are still three recent 2:04 men and two-time winner Dickson Chumba is back to try to make it three, so there is still plenty of potential for a faster race than Chumba’s 2:05:30 win last year. Pacing is set to help reach that goal, with a projected finish time in the 2:04:30 to 2:05:15 range. Whether or not he pulls off his 2:03:57 course record goal, if Chumba takes 1st he’ll be the first man in modern Tokyo history to defend. Japanese fans have long seen Bedan Karoki as the heir apparent to the late Samuel Wanjiru (in a good way), and after a mostly disappointing career in the marathon to date hopes are high that this will be the race where he finally breaks through.

There’s even a legit Japanese contender. At last year’s Tokyo Marathon Yuta Shitara (Honda) broke the national record after a sixteen-year drought. In Chicago Suguru Osako (Nike Oregon Project) took it even further, finishing 3rd in an Asian record 2:05:50. But his Asian record didn’t last long, as Moroccan-born Bahraini Asian Games silver medalist El Hassan El Abbassi miraculously bettered it by over a minute with a 2:04:43 at December’s Valencia Marathon. So, we have the current and former Asian record holders head to head in the same race on Asian soil, a nice little duel in the midst of the larger context.

Along with starting and ending 2018 as the Nike Oregon Project record holder in the marathon, one of Osako’s underappreciated achievements last year was that although eighteen Japanese men have broken 2:08 in the marathon, only the great Toshinari Takaoka had done it more than once until Osako did it for the second time in Chicago. Shitara has struggled since his 2:06:11 last year, but so far Osako has looked capable of maintaining his current level. Still, the historical numbers are enough to raise worries about whether he can keep it up until the Olympics. Even Toshihiko Seko warned him ahead of this race, “Don’t overdo it.”

Osako has already qualified for the MGC Race, and along with him five other qualifiers are looking to bust a fast one before September. The rest of the deep domestic men’s field will be looking to join them at the trials, and as a traditional men’s national team selection race the men in Tokyo have shortcuts to qualification not available to the women. Excluding the six who have already qualified, the first three Japanese men will make it if under 2:11:00 and the next three if under 2:10:00. Nine Japanese men broke 2:10 in Tokyo last year, so it’s not unrealistic for those six slots to fill up this time too.

Beyond that, men will need to go under 2:08:30 or have a two-race average under 2:11:00 to pick up a wildcard spot. Tadashi Isshiki (GMO) has the lowest bar to clear, only needing a 2:12:17 after running 2:09:43 in Tokyo last year without making the Japanese top six. Asuka Tanaka (Hiramatsu Byoin) and Daichi Kamino (New Balance) are also in a good position, needing 2:11:47 and 2:11:42 respectively after finishing just over 2:10 behind Isshiki last year. There’s a distressing number of people set to run Lake Biwa next week in hopes of hitting the two-race option after having run Beppu-Oita on Feb. 3, but realistically for everyone in Tokyo this will be their last chance.

Maybe the biggest sub-plot in MGC Race qualification is the failure so far of three-time defending New Year Ekiden national corporate champion team Asahi Kasei to qualify even a single runner. Both of its 2:09 men in Tokyo, Kenta Murayama and Takuya Fukatsu, are last-minute cancelations, and while Murayama is trying to regroup for April’s Hamburg Marathon the clock is really ticking. As the traditional home of Japanese marathoning, having produced legends like the Soh twins, Hiromi Taniguchi and Koichi Morishita, you have to think that the Asahi Kasei coaching staff is sweating bullets right about now.

There’s one piece of history that may be achieved but completely unnoticed Sunday. To date Japan has produced 98 men in its history who have broken 2:10. It seems inevitable that we’re going to see number 100 on Sunday. Who will it be? As Beppu-Oita showed last month, that’s almost impossible to guess. Motivation is so high right now that almost anybody in the 2:10 to 2:15 range, or even a first-timer, could do it. Tanaka and Kamino are high-potential candidates. First-timer Kensuke Horio (Chuo Univ.) is coached by the only Japanese man to have won Tokyo, 2:08:12 collegiate and debut marathon national record holder Masakazu Fujiwara, and with a then-school record 1:01:57 half marathon last fall he’s in the mix. Likewise for Keisuke Hayashi (Aoyama Gakuin Univ.), who broke Shitara’s Hakone Ekiden Seventh Stage course record with the equivalent of a 1:01:47 half marathon, then went on to win the Kumanichi 30 km in 1:29:47 and clear Shitara’s CR again at this year’s Hakone. But it’s pretty safe to say that the one people want to see do it more than anyone else is Shitara’s twin brother Keita Shitara (Hitachi Butsuryu).

Down on his luck the last few years and only running 2:28:29 and 2:18:39 in his two marathons to date, Keita was back close to his peak form with a 1:02:04 last month at the Marugame Half. In a TV interview Yuta recently said, “The only ones who can take the Japanese men’s marathon national record further are Suguru Osako, me, and my brother.” That may be out of range this time, but there’s plenty of reason to think Keita could be one of the ones to help make history.

The Tokyo Marathon will be broadcast live in 145 countries worldwide Sunday with commentary by JRN’s Brett Larner. Check local listings for availability. 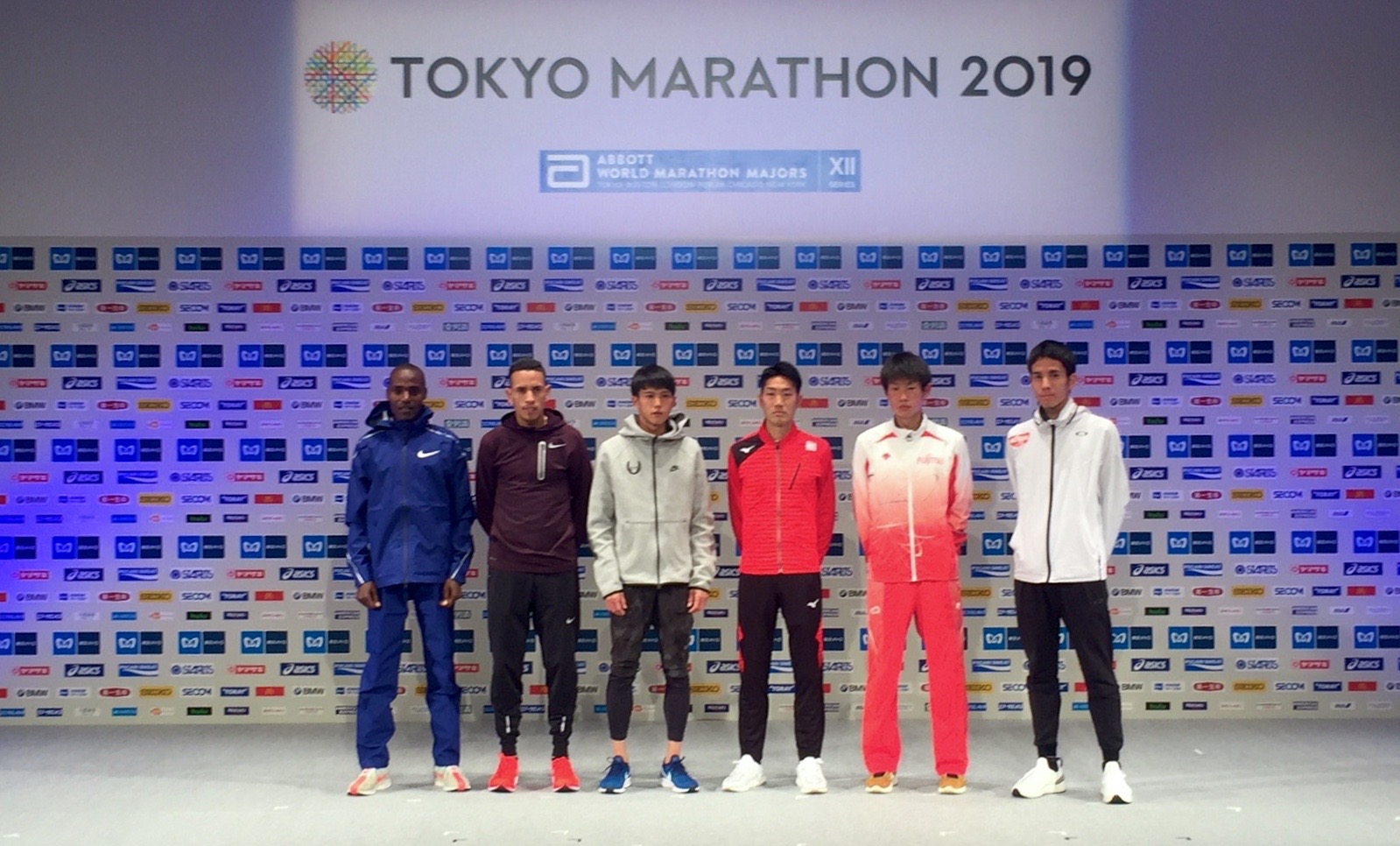 CK said…
Excellent preview article ans stats.
Commentating to 145 countries ... wonder what it's like to set such an impressive pb as a vet ?
Enjoy the day.