Also a Good Year for the Japanese Women


With the men really getting up to speed this year nobody really noticed that it was one of the best in history for the women too. A first-ever world-level distance gold medal on the track, all-time top 10 marks over 5000 m, 10000 m and the marathon and a top 15 mark in the half marathon, and the fastest average of its 10 best marathon performances since back in the golden years of 2005. 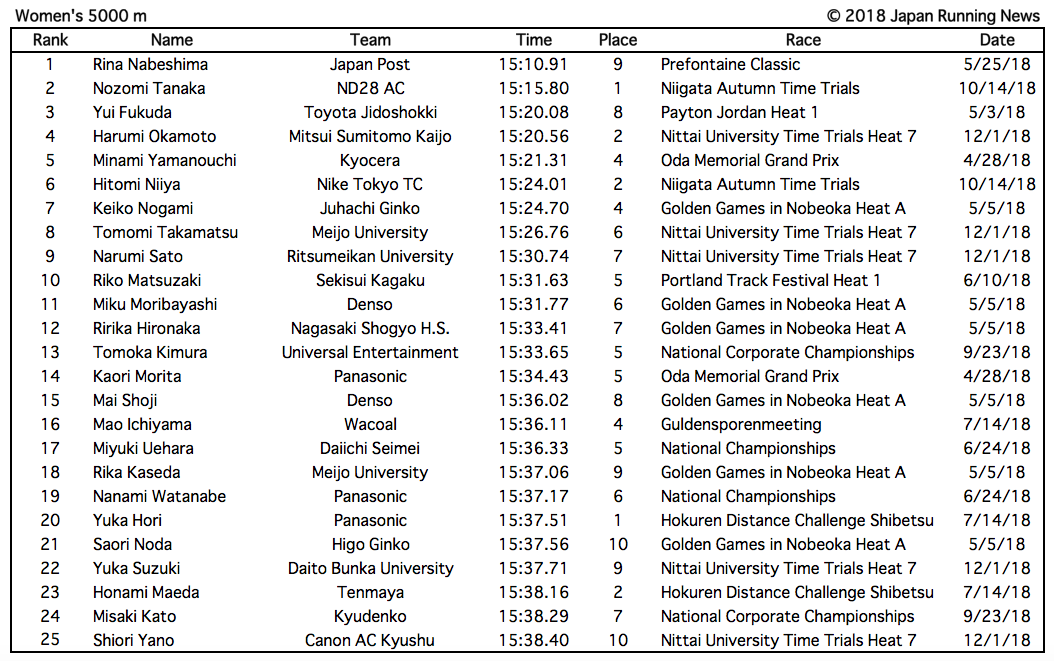 Rina Nabeshima (Japan Post) topped the 5000 m rankings with a 15:10.91 PB at the Prefontaine Classic in May. It's rare to see Japanese athletes in the Diamond League, but Nabeshima took multiple swings that delivered both her 5000 m time and an 8:48:21 in London, the second-fastest Japanese time ever and less than 4 seconds off the national record. Nozomi Tanaka (ND 28 AC), who won the gold medal over the summer in the World U20 Championships 3000 m, also made the all-time Japanese top 25 for 5000 m with a 15:15.80 in October, the only Japanese woman to date to have cleared the 2019 Doha World Championships entry standard. Speaking of Tanaka's gold, a shoutout to her domestique in that race, Yuna Wada. It couldn't have happened without Wada. 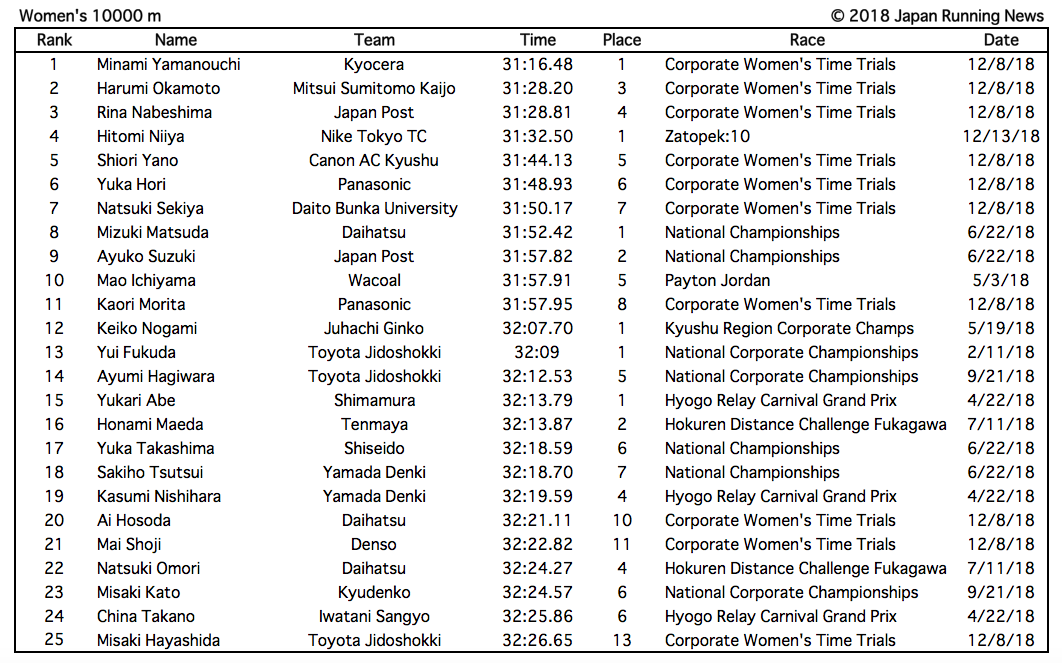 Like the rest of the world the 10000 m was pretty uneventful for most of the year, with only three Japanese women going under 32 minutes until the Dec. 8 Corporate Women's Time Trials meet. There Minami Yamanouchi (Kyocera), coached by former men's half marathon NR holder Atsushi Sato, ran 31:16.48, the second-fastest time in the world this year and one that put her at #8 on the Japanese all-time lists. Harumi Okamoto (Mitsui Sumitomo Kaijo) recovered from blacking out during an ekiden in October to run 31:28.20 and Nabeshima clocked 31:28.81, both making the all-time top 25. A few days later Hitomi Niiya (Nike Tokyo TC) ran her first 10000 m since finishing 5th at the 2013 Moscow World Championships, following up a brilliant course record run at the East Japan Women's Ekiden to win Australia's Zatopek:10 in 31:32.50. 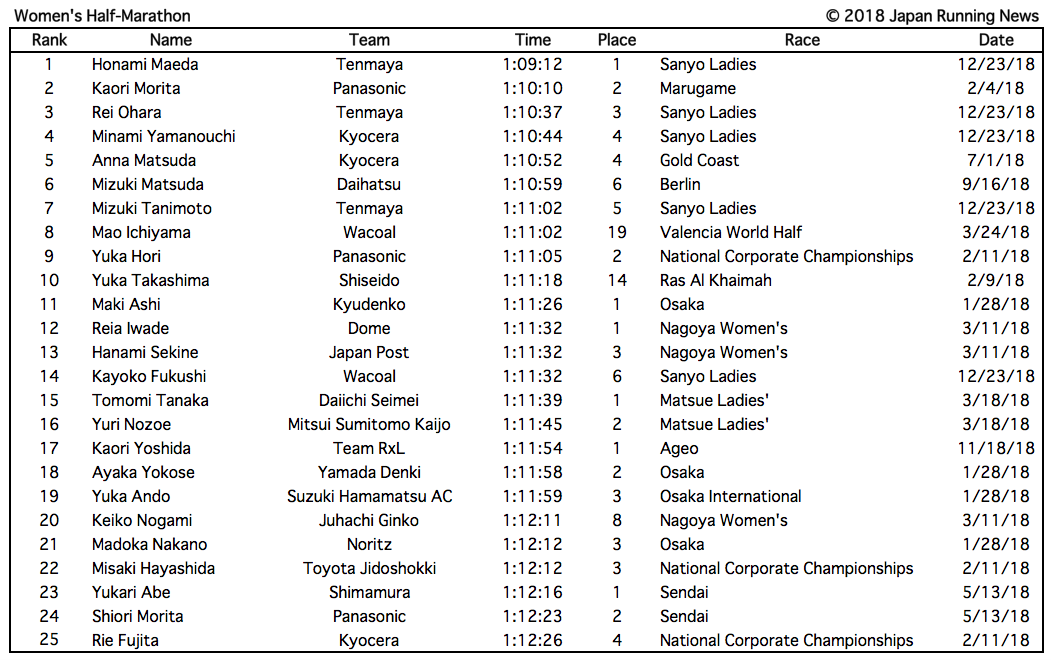 The half marathon has become something of a weak spot in Japanese women's long distance. Almost no one breaks 70 minutes anymore, and when they do it's inevitably at December's Sanyo Ladies Road Race. That was the case again this year. Before Sanyo only 3 women had even broken 71 minutes this year, one of them in the first half of Berlin. Honami Maeda (Tenmaya) came through with a 1:09:12 for the win in Sanyo, the fastest Japanese time in over 5 years and good for all-time #14, but she was the only one.

As with the Corporate Time Trials meet 10000 m and the Hachioji Long Distance meet for men's 10000 m, it seems to be becoming more and more the case that outside the marathon and the men's half marathon all the good Japanese times are coming in one yearend blowout. Relative to the men, the lack of development for women over the half marathon may be hurting development in the distance they care more about, the marathon. 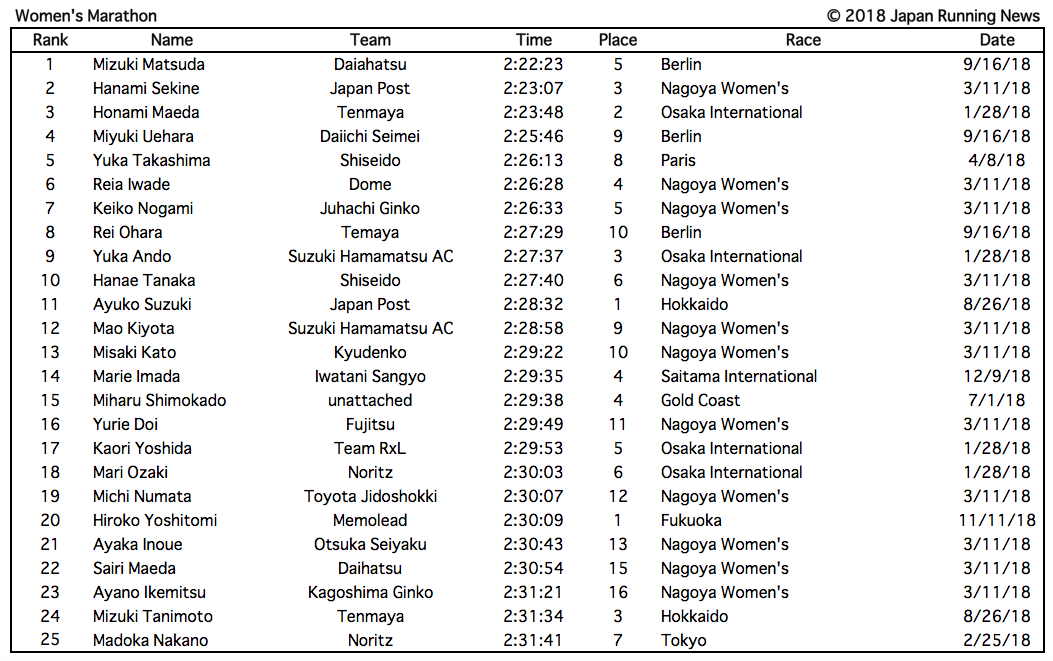 Maeda was also solid in the marathon with a 2:23:48 for 2nd at the Osaka International Women's Marathon. The woman who beat her, Mizuki Matsuda (Daihatsu), ran one of the best debuts in Japanese history, a 2:22:44, for the win. Track runner Nabeshima's teammate Hanami Sekine (Japan Post) also had a great debut with a 2:23:07 for 3rd at the Nagoya Women's Marathon. In September Matsuda improved on her Osaka time with a 2:23:23 for 5th in Berlin, moving up to all-time Japanese #9. Sekine and Maeda's times were also good enough to get into the all-time top 25.

Together they made 2018's average of its ten fastest marathon performances 2:24:59, the fourth-best ever and Japan's best since Mizuki Noguchi set the national record back in 2005. But it wasn't even close to what Ethiopia and Kenya did, or even enough to hold off the Ethiopian and Kenyan Bahrainis from replacing Japan as the #3 marathoning nation in the world this year. The men look like they may have a legitimate shot at a bronze medal in Tokyo 2020, but for the good the women did this year there's a lot of work still to be done. 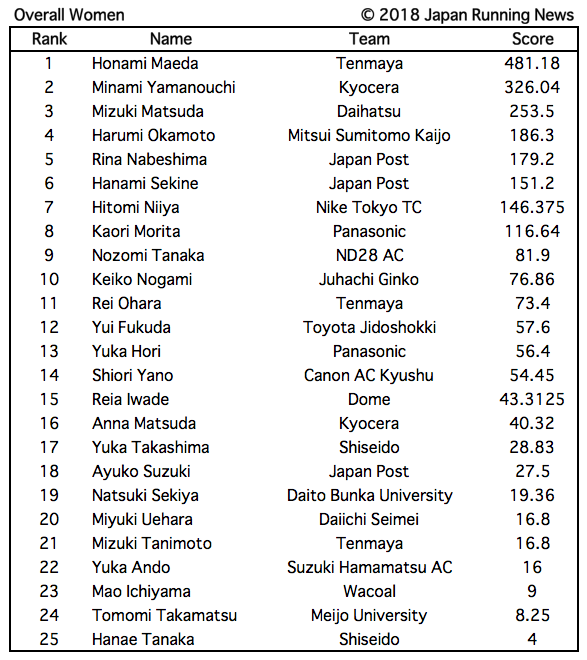 Having made ripples last year with the Hokkaido Marathon win that made her the first woman to qualify for the MGC Race 2020 Olympic trials, Maeda this year emerged as Japan's #1 woman overall on the strength of her Sanyo win, Osaka performance and good marks over 5000 m and 10000 m. Yamanouchi, a truly unique personage in the Japanese distance world who JRN first spotted at a local road race back in 2010, was 2nd overall thanks to good 5000 m and half marathon times along with her year-leading 10000 m.

The overall leader for most of the year thanks to Osaka, Matsuda fell to 3rd after the Sanyo Half. In the last few years Japan has had what seems like an endless stream of women in their early 20's running a first or second marathon in the 2:21 to 2:23 range and then not being able to match it. Matsuda looks like she has the strength to break that cycle, and if proven heat runner Maeda can do the same Japan may have the core of a quality team for Tokyo 2020.