Returning to Taiwan's Wan Jin Shi Marathon after having first run it in 2016, Yuki Kawauchi (Saitama Pref. Gov't) ran 2:14:12 to score his fourth-straight marathon win in a third-straight wire-to-wire solo performance. Choosing the hilly Wan Jin Shi Marathon as his final main tuneup for next month's Boston Marathon, Kawauchi came out swinging, leading an all-African pack of seven by almost 10 seconds after the tough uphill opening 5 km and stretching that out to over two minutes by the turnaround point at halfway.

On track to break the 2:13:05 course record by more than two minutes. under sunny skies with temperatures climbing to 22C and nearly 80% humidity Kawauchi began to slow incrementally. Behind him, Johnstone Kibet Maiyo (Kenya) and Aredome Tiuyay Degefa (Ethiopia) separated from the chase pack and began to push each other in pursuit of the top spot. With every 5 km split the gap to Kawauchi narrowed. At 40 km Maiyo threw down to get rid of Degefa, blasting the downhill final kilometer through a long tunnel as Kawauchi came into sight. 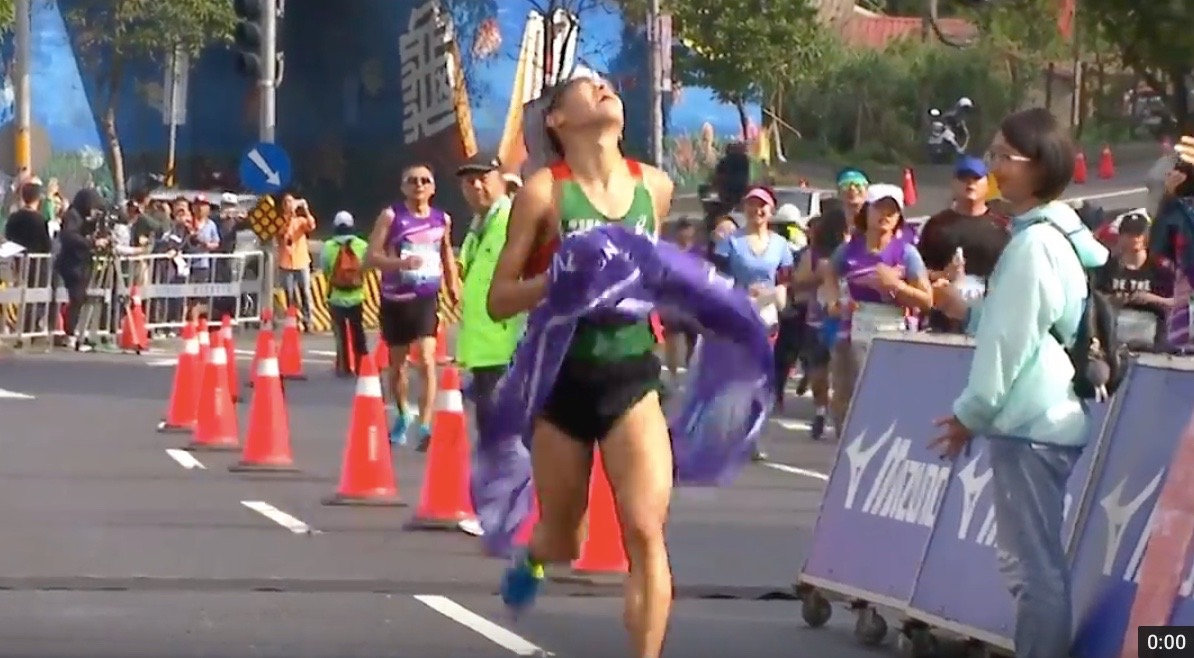 Kawauchi began to weave side to side, dangerously close to smacking into the side of the tunnel. In a blink the course record was gone, but with Maiyo bearing down on him he pulled himself together to hang on for the win, exactly tying his time from two years ago but going one better on position. Kawauchi staggered and collapsed a few steps across the line, immediately picked up by medical staff and wheeled off to receive treatment for dehydration. Maiyo crossed the line 28 seconds back in 2nd, with Degefa shuffling in for 3rd another 14 seconds behind Maiyo. It was a sign of how tough the conditions were than none of the other four Africans who had been in the chase pack until late in the race broke 2:20.

Having covered his bases in his Boston prep with a solo win in sub-zero temperatures in January, Kawauchi's win in heat an humidity in Wan Jin Shi was a boost to his confidence heading into his main race of the season. 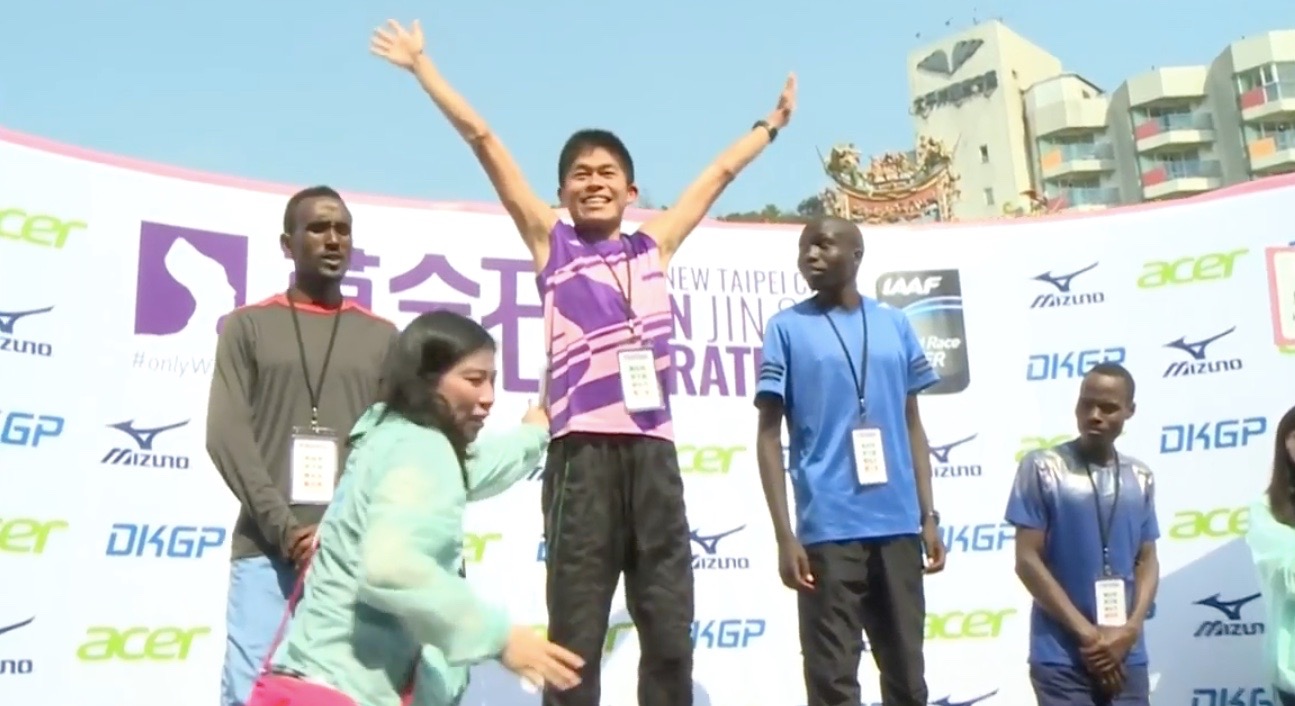 The women's race was relatively conservative most of the way before switching gears to an exciting sprint finish. A pack of eight women from Kenya, Ethiopia and North Korea set out at a lackadaisical 2:45 pace, gradually picking it up as they went but not cracking 2:40 pace until after halfway. By 30 km it was down to #1-ranked Rael Kiyara Nguriatukei (Kenya), Chemtai Rionotukei (Kenya) and Tizita Terecha Dida (Ethiopia), Dida dropping off shortly thereafter as the pace got hotter in parallel with the conditions.

Kiyara and Rionotukei were together until the bitter end, Kiyara just edging away in the final meters after the tunnel exit to take the win by a second in 2:35:57. 2016 Pyongyang and Macau Marathon winner Ji-Hyang Kim (North Korea) ran Dida down to finish over two minutes back in 3rd in 2:38:10. 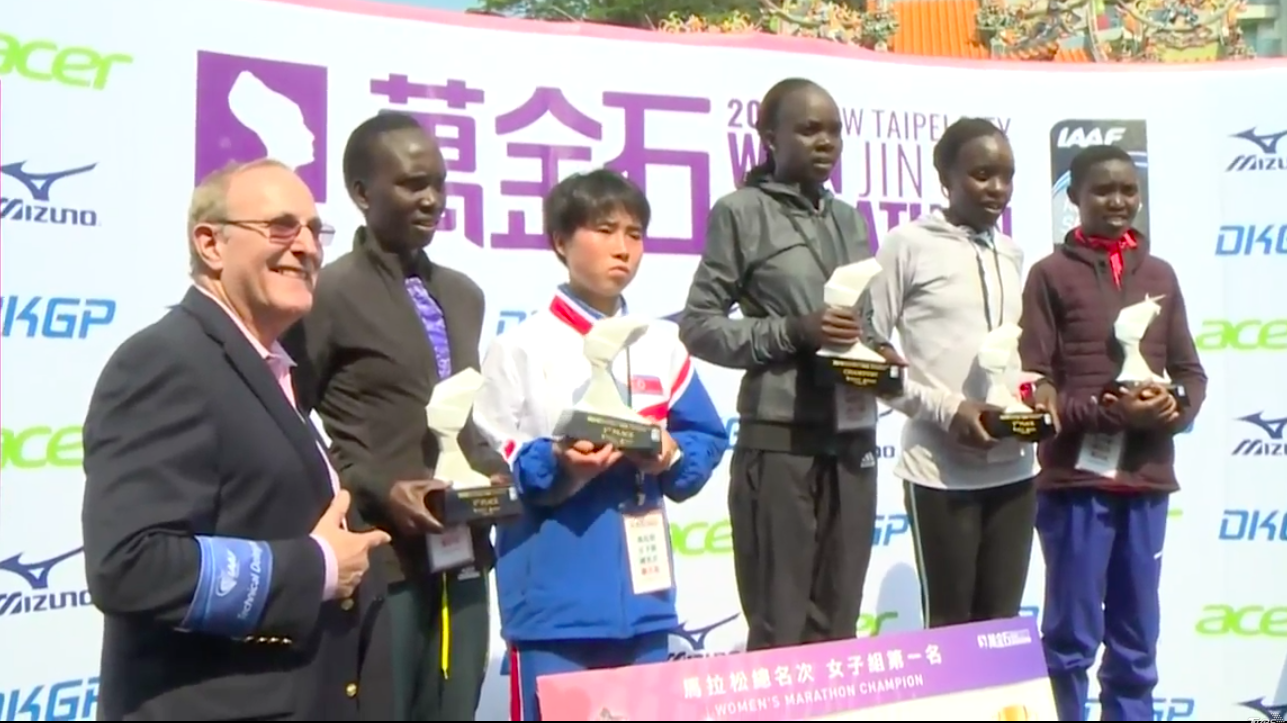 syl pascale said…
Brett, do you know if there was ever a book published in Japan on the Fukuoka Marathon? thanks very much. sylpascale@yahoo.com
March 19, 2018 at 7:27 AM

October 20, 2020
The qualifying race for the Nov. 22 National Corporate Women's Ekiden took place Oct. 18 in Munakata, Fukuoka, with Sekisui Kagaku winning the six-stage, 42.195 km race for the second year in a row in 2:17:03 and the top fourteen teams qualifying. Two-time national champion Daiichi Seimei's 21-year qualification streak was broken as it finished 15th. As the first national-level road race to take place since the start of the coronavirus crisis, teams were asked not to have their cheering squads along the course and other COVID countermeasures were put in place.
On the ekiden's 7.0 km opening stage, Kako Okada, an athlete with the Kyocera team, collapsed less than 100 m from the first exchange zone and was unable to continue. Okada went into full-body convulsions and on-site medical staff called an ambulance. Hearing the news from the First Stage supervisor, the race's chief referee quickly made the decision to officially stop Okada.
Two years ago another athlete suffered …
3 comments
Read more

October 18, 2020
In the first major road race held on public roads in Japan since the coronavirus crisis began, the Sekisui Kagaku team won its second-straight Princess Ekiden Sunday in Munakata, Fukuoka to lead the qualifiers for November's National Corporate Women's Ekiden Championships.
25 km national record holder Sayaka Sato took things out with a 22:22 CR for the 7.0 km First Stage, setting up a lead that last year's double 800 m and 1500 m national champ Ran Urabe held onto despite only running the third-fastest time on her 3.6 km leg. Urabe handed off to half marathon NR holder Hitomi Niiya, who took an incredible 1:15 off the record for the 10.7 km Third Stage. Niiya's time of 32:43 equated to 30:35 for 10 km, well under the track 10000 m NR, and singlehandedly took Sekisui Kagaku from a 10 second lead to 1:58 out front. Sekisui Kagaku's last three runners had it relatively easy, none of them in the top 8 on their stages but anchor Chikako Mori bringing them home safely for…
3 comments
Read more