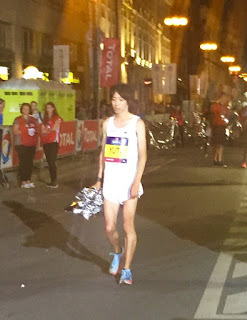 A week after his 28:55 at the Birell Prague Grand Prix 10 km and just eight days out from the Berlin Marathon, Yuta Shitara (Honda) made the great leap forward, taking 8 seconds off Atsushi Sato's 2007 half marathon Japanese national record, finishing 8th at the Czech Republic's Usti nad Labem Half Marathon.

Shitara is probably most well-known outside Japan for going through halfway under 62 minutes during his marathon debut at this year's Tokyo Marathon and still ending up with a 2:09:27, but he's been turning heads in Japan since his second year at Toyo University when he broke a stage record at the 2012 Hakone Ekiden and outkicked the U.S.A.'s Dathan Ritzenhein to finish in 1:01:48 at the NYC Half two months later, until this year the fastest time ever by a Japanese man on U.S soil.

Three weeks before Tokyo this year he ran a 1:01:19 PB at the Marugame Half. Many people would call that a solid tuneup three weeks out from a serious marathon, but eight days? In Prague both Shitara and his coach Satoshi Ogawa told JRN that he planned to run "marathon pace," 3:00/km, ahead of a planned shot at 2:07 in Berlin. Finding himself right behind eventual women's winner Joyciline Jepkosgei (Kenya), Shitara ratcheted up the pace and ended up as the top Japanese finisher in 28:55.

A week later and he was way faster, going through 10 km just off the Japanese NR in 28:10 and rocking steady to beat all the other next-generation Hakone stars transitioning to life in the longer distances, Suguru Osako (NOP), Kenta Murayama (Asahi Kasei), his twin brother Keita Shitara (Saitama T&F Assoc.) and others, to Sato's antique 1:00:25 mark.

Surely that's faster than his planned pace in Berlin. It has to be a confidence builder, but it''s almost equally surely too much a week and a day out from a hard marathon. After Tokyo Shitara said he would definitely go with the leaders next time. Ogawa told JRN in Prague that compared to Tokyo Shitara's stamina is far improved now. As wiser people have said, it's such a fine line between brilliant and stupid. If he gets away with it in Berlin, Shitara and his coach are geniuses. If not....well, he still set the half marathon national record, so it's not exactly stupid.

Considering the possible outcomes, Shitara's fellow Saitama native Yuki Kawauchi told JRN, "The only thing you can say for sure is that he's definitely, 100%, going to go with the lead group." If Shitara does and makes it to 30 km alongside Kenenisa Bekele (Ethiopia), Eliud Kipchoge (Kenya) and Wilson Kipsang (Kenya), one way or the other he'll be in for a hell of a last 12 km.

December 04, 2022
Japan had not one but two top-level men's marathons happening at the same time today. Conditions were a little too windy at the rescendent Fukuoka International Marathon to produce the kind of times organizers were hoping for, but there was still a great race up front. Almost dead-even on 3:00/km pace the entire way despite a building headwind from around 11 km to 18 km and again from 25 km to 32 km, and a strong tailwind from 32 km to the track finish, by 35 km a lead pack of 30 dwindled down to just 2021 winner Michael Githae (Suzuki), debuting teammate Vincent Raimoi (Suzuki), 40-year-old double world champ Abel Kirui (Kenya) and Ethiopian Israeli Maru Teferi . Teferi didn't really break it apart as much as he held steadier than everyone else. From 30 to 35 km he clocked 15:01 and from 35 to 40 km 14:59, while the other three slowed to the 15:17~15:23 range on the way to 40 km. Teferi kept that pace all the way to the end, winning in a PB 2:06:43 that broke his own Israe
Post a Comment
Read more

December 01, 2022
There's a monster new record on the books. At a time trial meet on Nov. 13 , Saku Chosei H.S. 3rd-year Hiroto Yoshioka ran a new 5000 m high school national record of 13:22.99. Yoshioka himself is humble about it, saying, "I might be the fastest high schooler ever, but I'm not the strongest." Yoshioka is now hot on the heels of the country's best, including Saku Chosei alumnus and Tokyo Olympics marathon 6th-placer Suguru Osako , in the hunt to make the Paris Olympic team. In his record-breaking run Yoshioka was in the lead pack of foreign athletes when its pace slowed with 1000 m to go. "I was feeling better than I expected," he says. "I decided to go back to the front." With two laps to go he sped up, setting himself up for a massive time. Yoshioka broke the previous high school record, 13:31.18 by Keita Sato of Rakunan H.S. , by over 8 seconds. When he had run the fastest-ever time by a 10th grader, Yoshioka and head coach Masaru Takamiz
1 comment
Read more

December 04, 2022
Continuing a stellar season that saw him run a 26:55.04 10000 m best in October, Benard Kibet Koech (Kyudenko) took 20 seconds off Haile Gebrselassie 's world best for 10 miles with a 44:04 win at the Kumamoto Kosa 10-Mile Road Race on Sunday. Alone early, Koech checked his watch repeatedly as he hammered the course, his only competition the great Gebrselassie's 17-year-old record. In the end nobody came within a minute and a half of him, Jonathan Ndiku (Hitachi Butsuryu) winning a three-way race for 2nd in 45:47 and Cleophas Kandie (Mitsubishi Juko) 3rd in 45:49. Takashi Namba (Toenec) was 4th in 45:50, just 10 seconds off Masanari Shintaku 's 45:40 national record from 1984. Kento Nishi (Osaka Gas) and Masashi Nonaka (Osaka Gas) were both under 46 minutes, and altogether 100 people were under 49:30, making it one of the deepest 10-milers in history. The high school boys' 10 km was also solid, with the top 9 all under 30 minutes. Maynard Nganga (Senshu Tamana H
Post a Comment
Read more