As Japan celebrates 100 years of the ekiden, its greatest racing series, the Big Three University Men's Ekidens, kicks off with the Oct. 9 Izumo Ekiden.

In the midst of Toyo's reign, underdogs Aoyama Gakuin University arose from nothing to replace them at the top. Susumu Hara, another innovative and businesslike young coach, brought AGU up systematically from an absence of over 30 years from the scene to become the dominant team of its era, achieving an unprecedented triple triple, winning the Big Three, Izumo, the National University Ekiden and Hakone, in a single season and winning Hakone three years in a row. Hara fully embraced the celebrity his success brought, he and the team members becoming TV regulars. But all things must pass. If Sakai was the revolutionary and Hara the evolutionary, Hayashi Morozumi is set to become the offworld expeditionary.

At Saku Chosei H.S. Morozumi was arguably Japan's greatest high school coach. Yet another innovator, his regimen of cross country-based training in the mountains of Nagano producing the fastest all-Japanese high school team in history and cultivating future talents including 5000 m national record holder Suguru Osako and other leaders of the current pro generation like Akinobu Murasawa, Yuki Sato and Yuichiro Ueno. Taking over at Tokai University in 2011, he set about transforming the program systematically with his cross country-oriented approach. Rising step by step just as AGU had before it, last year Tokai came up just short of winning Izumo, run down on the anchor stage by AGU. At the longer Nationals and Hakone it did progressively worse, Morozumi's development of the team over 10000 m and half marathon not quite there. But this year, it looks like it could be another story. 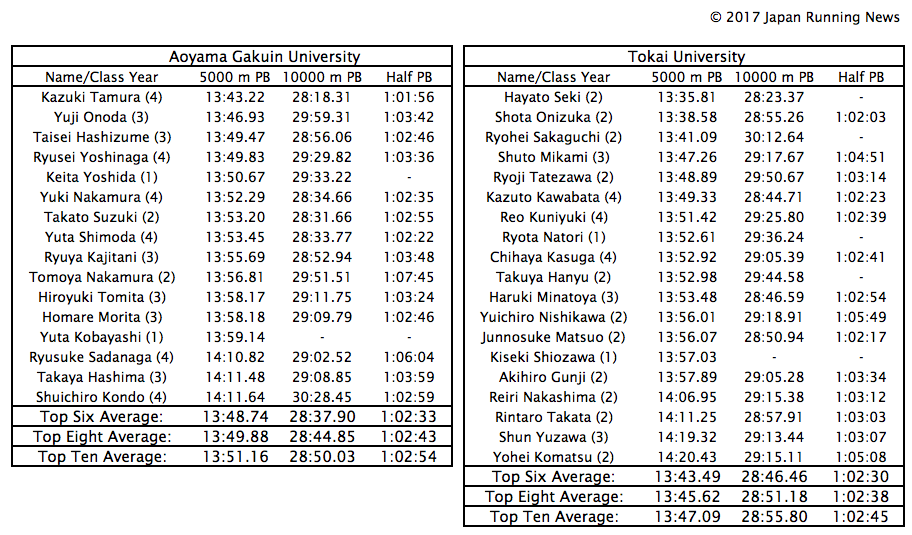 AGU returns down on strength with the loss of key seniors including last year's Izumo anchor Tadashi Isshiki, but Tokai is back stronger and with incredible depth. AGU boasts 13 men with 5000 m bests under 14 minutes, 6 under 29 for 10000 m, and 7 under 1:03 for the half marathon, one of them under 1:02. Tokai has 15 men under 14, 6 under 10000 m and 6 under 1:03. No other team comes close. With 6 stages at the season-opening Izumo averaging 7.5 km each both schools could field a JV team with a good chance of making the top 3.

On average time Tokai is better over 5000 m and AGU better over 10000 m, the balance giving AGU a 10-second advantage total over the 45 km or so Izumo course. That's roughly half what it had last year. Given the loss of Isshiki to graduation will that be enough for it to hold off Tokai again? At Nationals, with 8 stages averaging around 14 km each, AGU has a slightly weaker advantage, 21 seconds over about 110 km. But at Hakone, where it counts most, Tokai has passed AGU by, its half marathon credentials giving it a 90-second advantage over AGU with the Ageo City Half Marathon and other key development races still to come. Izumo and Nationals could go either way, but Morozumi looks poised to finally assume to position of Japan's top university coach with the Hakone win. If not this year, next year looks guaranteed. 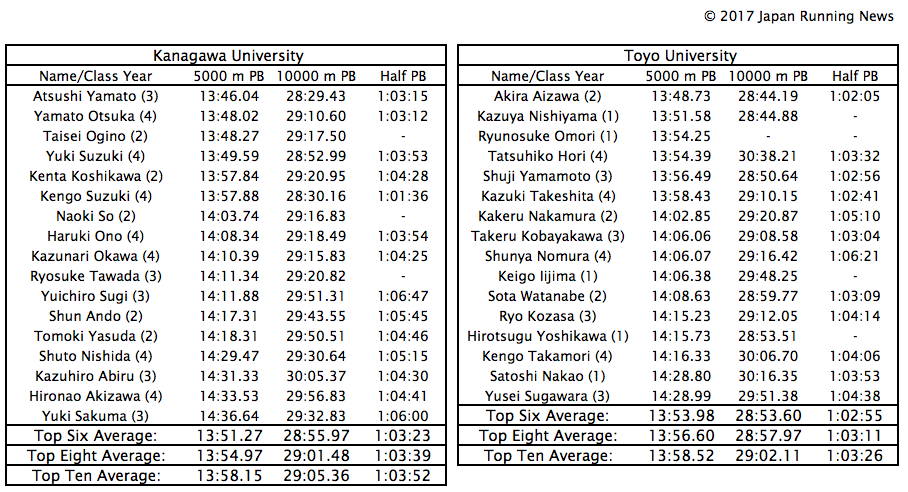 Although overtaken by the success of his successors Toyo's Sakai has never lost the plot, always a top three contender since its time at #1. This season is no exception, with Toyo the only school besides the two favorites to have 6 men under 14 minutes for 5000 m and top 6 averages under 29 minutes and 1:03. It's a good bet for Toyo to make the top 3 at both Izumo and Nationals, but on half marathon credentials it currently lags, hurting its Hakone chances.

Until Sept. 30 Toyo was the only real contender for 3rd at Izumo, but at the Setagaya Time Trials meet low-ranked Kanagawa University put four men under 13:50 and a fifth under 14:00, all for the first time. Suddenly finding itself with a faster 5000 m average than Toyo and just off Toyo's level in the 10000 m, Kanagawa will present an unexpected challenge for top 3 in Izumo. Until now it has been heavily dependent on its top two, National University Half Marathon champion Kengo Suzuki and sub-28:30 runner Atsushi Yamato, but its newfound depth gives Kanagawa an edge dulled only by its lack of experience.

Led by Rio Olympian Kazuya Shiojiri, Juntendo University is nearly even with Toyo for the short and fast Izumo Ekiden, but as the distances rise its strengths decline. At its current level look for Juntendo to be near the back of the top ten at Hakone. Nittai University has come on strong this season, slightly lacking depth at 5000 m but featuring 6 men under 29 minutes for 10000 m and good half marathon credentials. It's a potential top 3 placer at all three races this season.

Waseda University and Chuo Gakuin University are close behind and should be in it for at least top 5 at Izumo, CGU driven by ambitious second-year Takumi Yokokawa. Waseda is struggling with heavy losses to graduation, and while it has the 5000 m credentials to do well in Izumo it will struggle to make the top ten at Nationals and Hakone without a great leap forward at Ageo and the fall's 10000 m time trial meets. 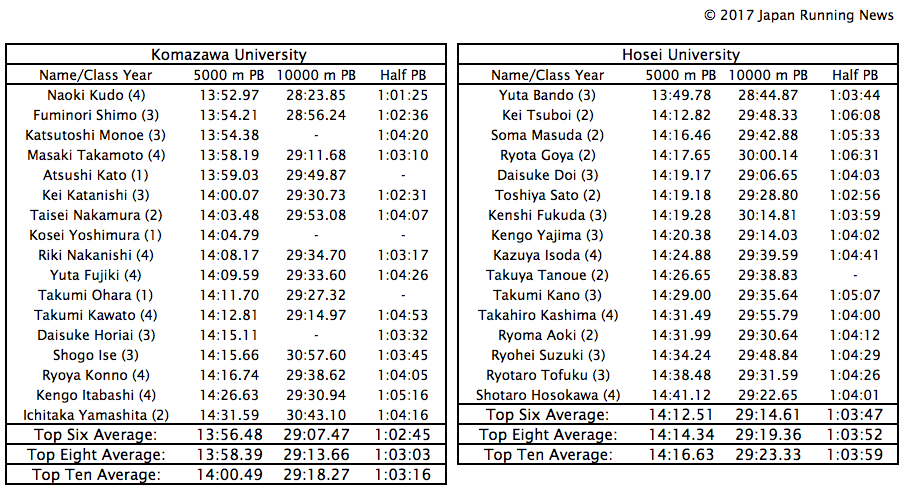 Komazawa University is hurting over 10000 m, but, led by 1:01:25 fourth-year Naoki Kudo, its solid half marathon average ranks it 3rd at Hakone right now. Hosei University lucked into a 10th-place ranking when some stronger programs failed at the last Hakone Ekiden, its average times more representative of the kind of second-tier teams that will compete at next month's Hakone Ekiden Qualifier to fill the 11th-20th place positions on the Hakone start line in January.

Looking at the top-ranked individuals in the ten best programs, Shiojiri and Kudo lead the rankings over 5000 m and half marathon. AGU fourth-year Kazuki Tamura leads the 10000 m rankings, the only runner to make the top ten at all three distances. Although there are more teams than ever before featuring African members, it's notable that not a single one of those teams is currently in the top ten in the country. Virtually all of the teams with Africans except Kyushu's Daiichi Kogyo University are in the Tokyo-area Kanto Region from which the Hakone schools are drawn, and with none making the top ten rankings this year's Izumo Ekiden could well be the first time in decades that not a single Kanto team has fielded an African runner.