Japanese runners were busy overseas this weekend with top-level athletes racing in at least four countries. Four Japanese athletes ran in Saturday’s Birell Prague Grand Prix 10 km. In a race that saw the women’s road 5 and 10 km world records fall to half marathon world record holder Joyciline Jepkosgei (Kenya), Asian area record holder Kayoko Fukushi (Wacoal) was almost five minutes out of the action, finishing 10th in 34:43. Fukushi told JRN post-race that she had stomach problems midway, but with a halfway split just under 17 minutes she was never really in the action. Four women cleared 31 minutes, the most in history.


Benard Kimeli (Kenya) took the men’s course record down to 27:10 in a three-win sprint finish that led eight men under 28 minutes, another history-making mark. Missing out on making it nine, 10000 m U18 national record holder Kenta Murayama (Asahi Kasei) came up well short of his goal of bettering the 28:05 road 10 km national record, finishing just 19th 29:09 and losing a familiar-looking sprint finish against teammate Tetsuya Yoroizaka who clocked the same time for 18th. Taking the top Japanese spot in a tuneup for the Berlin Marathon later this month, Yuta Shitara (Honda) executed a gradual buildup to negative split his was to a 28:55 for 16th. Shitara will stay in the Czech Republic until Berlin, running next weekend’s Usti nad Labem half marathon as his final shakeout before going for a 2:07.


Having spent the last couple of weeks in Europe with Yoroizaka, Hiroki Matsueda (Fujitsu) helped lead the Japanese team at France’s Decanation to a 4th-place overall finish, taking 2nd in the men’s 2000 m in 5:23.15. Having cracked 9 minutes for 3000 m at this summer’s National High School Championships, Nozomi Tanaka (Nishiwaki Kogyo H.S.), daughter of sub-2:30 amateur marathoner Chihiro Tanaka, took 3rd in the women’s 2000 m in an U20 national record 5:53.47. 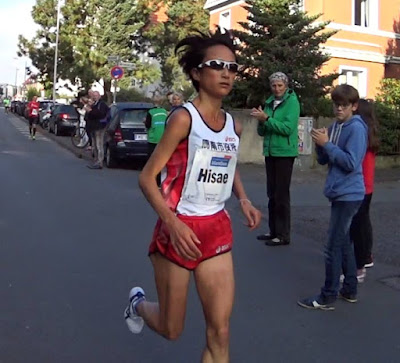 Equalling Tanaka’s position to mark the top Japanese placing in an international road race this weekend, Hofu Yomiuri Marathon course record holder Hisae Yoshimatsu (Shunan City Hall) paced her European debut perfectly, moving up from 8th place at 10 km to finish 3rd in 2:36:02 at the Volksbank Muenster Marathon. In a race that saw the lead quartet of Africans go through halfway on course record pace in 1:14:00 and last year’s runner-up Yoshiko Sakamoto (Y.W.C.) in 1:17:08, Yoshimatsu’s first and second halves were almost dead even, 1:17:58 for the first half and 1:18:04 for the second. 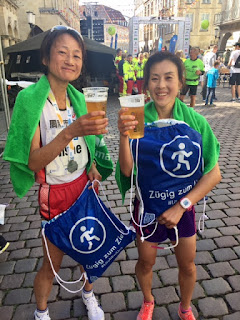 With the fastest second half in the field Yoshimatsu overtook her competition, including Sakamoto, one by one the finish less than 3 minutes off Kenyan winner Rose Jepchogei’s 2:33:05. At 2:38:29 Sakamoto was 16 seconds faster than last year but took only 4th. Last fall Sakamoto became the first Japanese runner to win the Osaka Marathon, Yoshimatsu taking 3rd in that race. In Muenster Yoshimatsu exactly tied Sakamoto’s Osaka time. The pair will line up again in Osaka this year, promising a great duel.

At the U.K.’s Great North Run half marathon, Hiroyuki Yamamoto (Konica Minolta) had the best Japanese men’s placing since Arata Fujiwara took 4th in 2013, finishing 5th in 1:02:03. Despite having run 1:01:04 in Marugame earlier this year, Yamamoto’s teammate and former Hakone Ekiden star Daichi Kamino was a non-factor, finishing 12th in only 1:04:47. Yamamoto will return to the New York City Marathon in November after finishing 4th there last year, New York’s best-ever Japanese men’s placing.