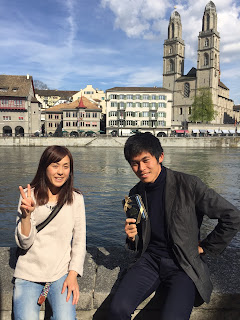 Most of the running world will be focused on the London Marathon, where among others Japanese track and ekiden great Yuki Sato (Team Nissin Shokuhin) will be trying again to get the marathon right, but there's at least one other good race this weekend.  Last year Yoshiko Sakamoto (YWC), an unknown amateur runner and mother of three, seemed to come out of nowhere to win Switzerland's Zurich Marathon, with the popular Yuki Kawauchi (Saitama Pref. Gov't) taking 2nd in what ended up being his fastest race of an injury-prone 2015.  This year both Sakamoto and Kawauchi return to Zurich for Sunday's race with support from JRN.

Sakamoto faces at least two strong rivals this year.  It has been a while since Kenyan-born Swede Isabellah Andersson's 2:23:41 PB in Dubai 2011 or even since she broke 2:30, but with a 2:30:02 in Tokyo in February she is still the best in the field.  A stroke against her: Andersson only joined the Zurich field after a DNF in Rotterdam earlier this month.  Katharina Heinig, daughter of German legend Katrin Dorre, is next on the list with a 2:33:56 best from Hamburg 2014 and will be trying to make the German Olympic team.  To do that she will need to beat Anna Hahner's 2:30:35 from Hannover two weeks ago.  Sakamoto, who pulled out of January's Osaka International Women's Marathon when her children came down with the flu and the Tokyo Marathon when she did the same, is seeded third and will have a tough time repeating.

Kawauchi ran Zurich last year still struggling with complications from an ankle sprain, finishing 2nd in 2:12:13.  This year he is fit, well-trained and enthusiastic about going for his first sub-2:10 win outside Japan.  Ethiopian Abere Belay is the only other athlete in the field to have broken 2:10 with a 2:08:18 in Dubai 2014, but since then he hasn't broken 2:12 in four attempts.  Kenyans Edwin Kiprop Korir and Titus Masai form the rest of the small front group, but the race looks like Kawauchi's to lose.  The forecast is not looking ideal for fast times; sometimes it snows in April, but wet or dry there's still a race to be run.

Brett Larner said…
My bad. She was the last version of the official entry list but has been taken off the current one.
April 22, 2016 at 3:49 PM