Overcoming tough conditions that saw 19 of the 35 elite athletes in the combined men's and women's elite fields drop out, Yuki Kawauchi (Saitama Pref. Gov't) led almost start to finish to score his first-ever European win at Sunday's Zurich Marathon.  With snow starting just before the race began and peaking out with 1 cm accumulation 40 minutes in Kawauchi, 2nd last year in 2:12:13 and running again with support from JRN, pushed it from the gun in hopes of a sub-2:10 win.  Pacer Edwin Kiprop Korir (Kenya), tasked with taking the race out on track for 2:09:24, slipped on a corner at 3 km and twisted his ankle, holding on through 5 km before falling behind and leaving Kawauchi to do the heavy lifting.

Followed closely by Ethiopians Abere Belay and Bizuneh Malaku Belachew and the soon-to-vanish Titus Masai (Kenya), Kawauchi led through off-and-on snow all the way to 35 km, the Africans never making an effort to share the load.  After Masai and Belachew lost touch Belay made a move on a small hill at 35 km.  Kawauchi quickly responded and was back in front within 30 seconds.  "His movement didn't look right and I could tell that his legs were locking up from the cold, so I felt pretty confident about how it was going to go," Kawauchi said post-race.  "Having won in snow a few years ago in Nagano I knew it was to my advantage."


Kawauchi dropping Abere just before 39km at @zurichmarathon then waiting at finish to say thanks for a good race. pic.twitter.com/tE6kS6oxqr
— Japan Running News (@JRNHeadlines) April 25, 2016


The pair sparred over the next 4 km before Kawauchi took advantage of a slight hill on a bridge just before 39 km to open a gap that Belay couldn't overcome.  Clocking 2:55 between 39 and 40 km despite a sharp corner and slick surfaces, Kawauchi put over a minute on Belay to win in 2:12:04.  His 60th marathon, Zurich was Kawauchi's first win in Europe and the 25th marathon win of his career.  It was also his 50th time breaking 2:17 and 30th time going under 2:13, both more than any other athlete in history.  "I knew early on that the time wasn't going to happen, so I focused on winning," Kawauchi said.  "I'm a little disappointed that I didn't at least break 2:12, but my legs were so cold that I couldn't move when I tried to kick at the end.  But given that I had to lead over 90% of the way I think this was a great run.  Now I've won marathons in Asia, Australia, Africa and Europe.  Next up, the U.S.A."

Abere took 2nd in 2:13:09, the only elite African male or female to finish the race.  Switzerland's Julien Lyon was 3rd in his debut, running 2:16:17.  Kawauchi took extra satisfaction just over an hour later when Yuki Sato (Team Nissin Shokuhin), like Kawauchi 29 years old and the biggest star on the Hakone Ekiden circuit back when Kawauchi was still only an anonymous minor college runner, ran a PB of 2:12:14 for 11th at the London Marathon.


Less fortunate than Kawauchi was defending women's champion Yoshiko Sakamoto (YWC).  Sakamoto ran the first 15 km at sub-2:30 pace as part of a group including the four fastest women on the entry list and several male pacers.  The group was hit directly by the worst of the snowfall, and after the turnaround into the slight headwind near halfway, with clothing soaking from earlier snow and rain they began to drop one by one.  Olympic hopeful Katharina Heinig (Germany) made an early break, but after Sakamoto passed her at 27 km to take the lead Heinig quickly stopped, shaking badly in the cold. 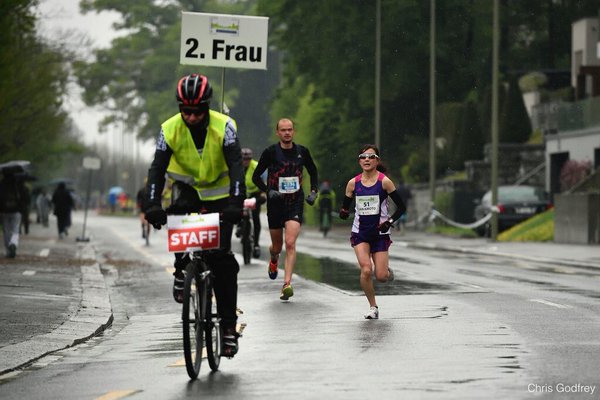 A kilometer later it was Sakamoto's turn.  "I was running really smoothly and starting thinking I could win it, but I realized that I couldn't feel my hands or feet anymore," Sakamoto told JRN afterward.  "My vision started going black and I couldn't tell if I was still running.  I stopped and started shaking so badly I fell.  A spectator picked me up, hugged me and started rubbing my back hard to warm me up.  When I kept shaking and couldn't talk she took me back to her house, filled a hot bath for me, gave me dry clothes and shoes and then called an ambulance.  I can't speak English so I couldn't talk to her and don't know her name, but I really want to say thank you for saving me to whoever she was."

Sakamoto was taken to a nearby hospital but later released with no serious problems.  Along with her, Heinig and African-born elites Isabellah Andersson (Sweden) and Alemitu Bekele Aga (Belgium) dropped out due to the conditions, leaving Daniela Aeschbacher (Switzerland) to unexpectedly win in 2:47:40.  "I had no idea I was in the lead until the top woman's escort bicycle came back!" Aeschbacher said post-race.  Race director Bruno Lafranchi commented, "These were the worst conditions in the history of the Zurich Marathon.  At another race we organize in December we had 12 degrees and sunshine.  In late April, 3 degrees and snow!  I was glad I was in the lead car and not out there running."

CdaveRun said…
Yet another marathon, a win in the snows of Zurich, that adds to the Legend of Yuki Kawauchi.
And on the same day he beats the darn good and finish time of Yuki Sato who ran in wonderful conditions in a fast race in London.
April 25, 2016 at 10:39 AM

jbj said…
Only a samouraï could win in these tough conditions, Incredible Kawauchi !
April 26, 2016 at 4:51 AM

Ian Long said…
I ran the 10k in Zurich that was held at the same time and can confirm how tough the conditions were.

Huge respect for Kawauchi and indeed all of the marathon runners particularly as temperatures had been nearer 20 degrees two days earlier
April 26, 2016 at 6:34 PM