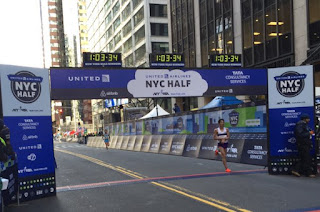 For the last five years JRN has worked with the NYRR to bring the fastest two Japanese university men at November's Ageo City Half Marathon, one of the world's absolute deepest races, to the United Airlines NYC Half.  The program has had a big impact on the runners who have qualified, Yuta Shitara and Kenta Murayama both making the Beijing World Championships last year and Murayama turning some heads with his marathon debut in Tokyo this year, two-time NYC runner Takashi Ichida winning the 2016 Japanese XC national title and Ikuto Yufu, the highest placer in New York to date at 9th, winning the prestigious Karatsu 10-Miler last month.  This year Komazawa University third-year Yusuke Nishiyama and 19-year-old Tokai University first-year Haruki Minatoya made the trip, both running in the U.S.A. for the first time and Nishiyama accompanied by Komazawa coach and former marathon national record holder Atsushi Fujita. 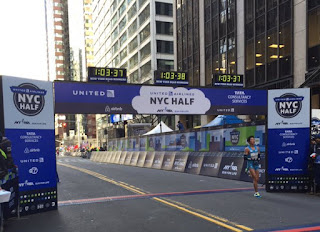 Both chugged along in the main pack through the slow first 5 km in 15:18 before the race really began.  When the pace picked up Nishiyama was quick to fall off, but the young Minatoya stayed in contact with the lead group through 10 km before last year's runner-up Stephen Sambu of Kenya dropped a 13:58 split between 10 and 15 km to blow the race apart and seal the win in 1:01:16.  Minatoya opened a 20-second lead over Nishiyama mid-race, but Nishiyama rallied to overtake him at 18 km.  Working together they closed on European marathon champion Daniele Meucci of Italy late in the race but came up just short of catching him.  Meucci took 9th in 1:03:35, Nishiyama coming just shy of tying his former Komazawa teammate Yufu's placing as he finished 10th in 1:03:37.  Minatoya, a last-minute replacement for Ageo winner Kenya Sonota of Komazawa, was right behind in 11th in 1:03:40. 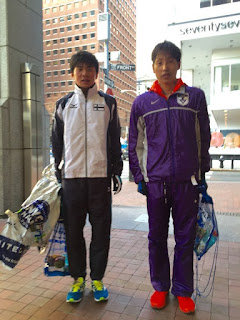 "That was hard," Nishiyama said post-race.  "I had a hard time going from so slow to so fast, and my hamstrings felt really tight in the cold."  Minatoya, a native of Akita in northern Japan, said, "It wasn't as cold as back home so it didn't bother me that much, although I wouldn't usually run in this kind of weather in just singlet and shorts.  The hardest part for me was running alone the whole second half of the race."  Both runners head back to Japan on Monday, Nishiyama targeting the 5000 m and Minatoya the 10000 m at May's Kanto Regional University Track and Field Championships in hopes of making June's National Track and Field Championships for a shot at the Rio Olympic team.

Unknown said…
I feel like the more racing experience I get the more poignantly I realize that the best way to practice racing is...to race. I know we've had this conversation many times, but it seems like the emphasis on "sticking to a pace" doesn't develop the physiological and psychological responsiveness to sudden changes in pace, which is how the world's top competition generally race (although the women's race at NYC was quite like a track race of keeping a more consistent rhythm between Molly and Joyce)

It will be interesting to see what would happen if more Japanese runners entered this race as a pack....
March 21, 2016 at 2:53 PM