While most of the rest of the racing world kicks back for the holidays in the lull between seasons, Japan's distance runners from junior high to pro are hitting the peak of their year with the month-long championship ekiden season.  The biggest race of the weekend is the National High School Ekiden Championships, lovingly broadcast live nationwide and commercial-free for 4 and 1/2 hours this Sunday from Kyoto on NHK starting at 10:05 a.m.  JRN will cover both the girls' and boys' races live on @JRNLive. 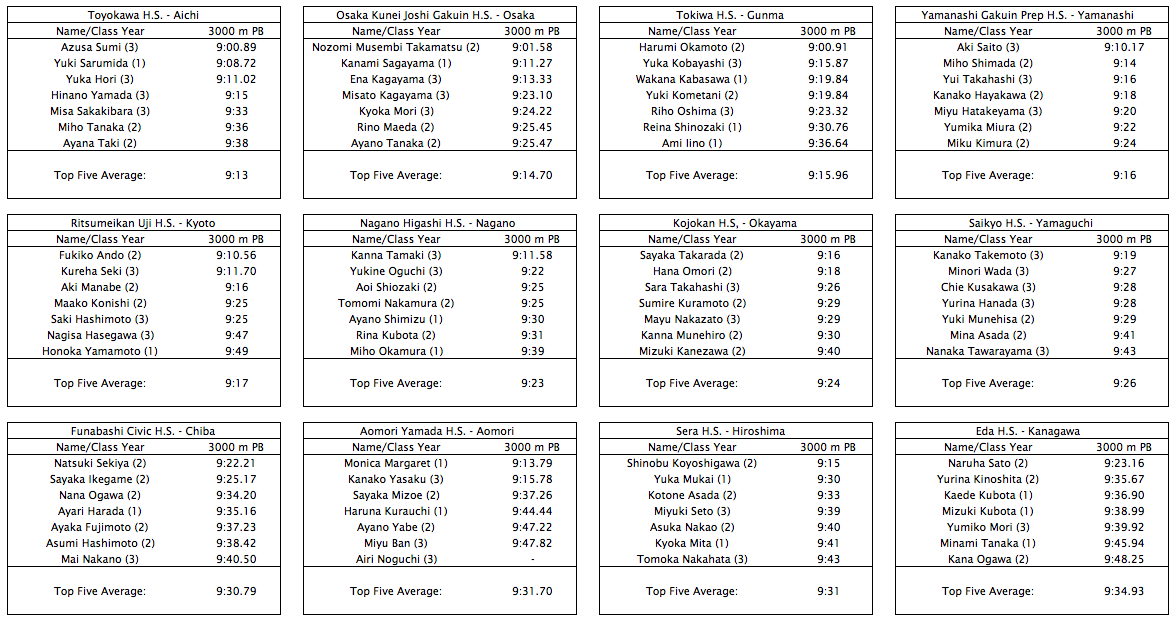 In its 26th running the girls' race covers 21.0975 km in five stages, with 47 teams representing each of Japan's prefectures.  Defending champion Toyokawa H.S. of Aichi returns ranked #1 with a 5-runner 3000 m average of 9:13 led by senior Azusa Sumi in 9:00.89.  But it's going to be a very closely-matched race, with 4 other teams averaging within 4 seconds of Toyokawa.  Osaka Kunei Joshi Gakuin H.S. is the media favorite with 2014 Youth Olympics 3000 m gold medalist Nozomi Musembi Takamatsu and a 9:14.70 average ranking it #2.  Junior Harumi Okamoto leads #3-ranked Tokiwa H.S. from Gunma with her 9:00.91 best, and, while they lack the star runners of the top 3 Yamanashi Gakuin Prep H.S. and 2012 winner Ritsumeikan Uji H.S. of Kyoto are close behind with averages of 9:16 and 9:17.  Both Osaka Kunei and Ritsumeikan Uji have 7 girls with bests under 9:30, giving them an advantage on depth that will come into play if any of Toyokawa's 4 main runners is not fit. The top 12 individuals in the National High School Girls Ekiden Championships.  Look for most to run the First Stage.

Altogether 11 girls from 8 schools have bests under 9:12 led by Kenyan senior Monica Margaret of Samuel Wanjiru's alma mater Sendai Ikuei H.S. in 8:59.60, just of Toyokawa's Sumi, Okamoto of Tokiwa and Youth Olympics gold medalist Takamatsu of Osaka Kunei.  As at the team level, any of the top 11 girls would be star runners at the university level in the NCAA.  Watch out for the best racing and the inevitable falls on the track on the First Stage and for a close finish back on the track on the anchor Fifth Stage. 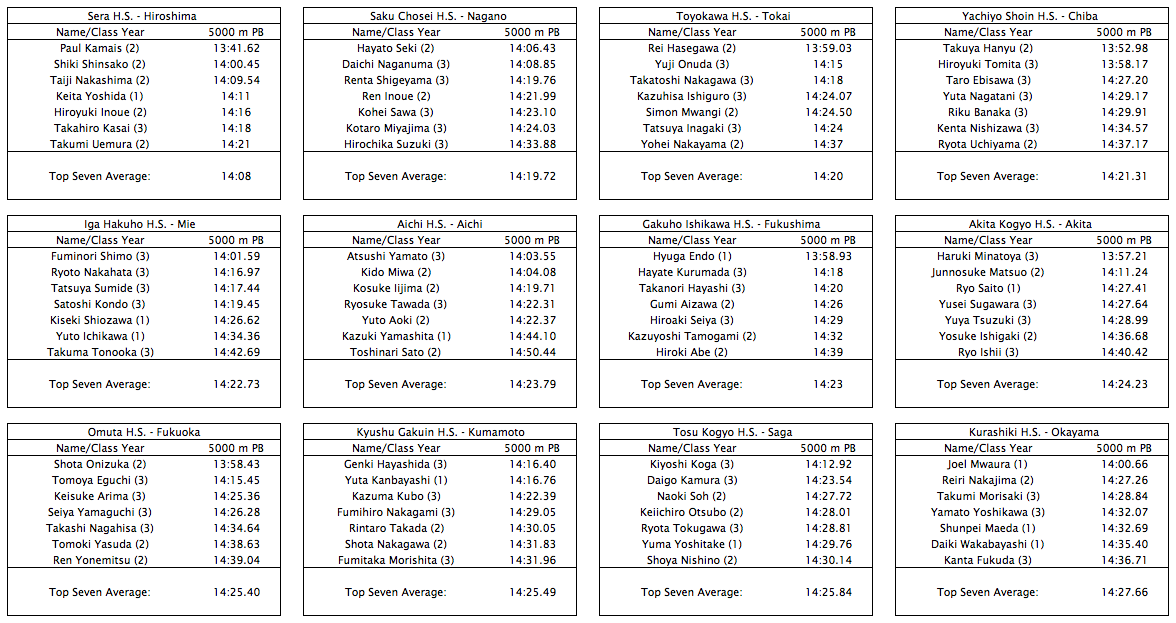 The boys' race, celebrating its 65th running, features an expanded field of 61 schools competing with 7-member teams over a total of 42.195 km.  Most of last year's champion Yamanashi Gakuin Prep H.S. has graduated and moved on to form the core of this year's Yamanashi Gakuin University team.  In its absence, 2011 winner Sera H.S. of Hiroshima, alma mater of sub-27 Kenyan Bedan Karoki (DeNA RC) and recent 27:38 runner Tetsuya Yoroizaka (Team Asahi Kasei), is the heavy favorite, its 7-runner 5000 m average of 14:08 putting it way ahead of the competition if not quite in range of the 2:01:32 course record set in 2004 by the Wanjiru-led Sendai Ikuei H.S. or 2014 NCAA D1 XC winner University of Colorado. 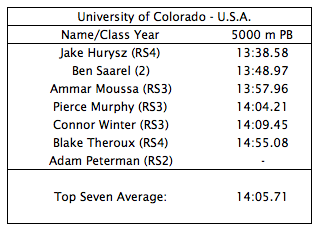 Beloved by fans for having run the fastest time ever by an all-Japanese team, 2:02:18, Nagano's Saku Chosei H.S. comes in ranked #2 with an average of 14:19.72, but that's where things get interesting.  The next 9 teams, including 2012 winner Toyokawa H.S. of Aichi ranked at #3, all average within 6 seconds of Saku Chosei, all but guaranteeing a chaotic and complicated race behind Sera.

The top 12 individuals in the National High School Boys Ekiden Championships. Look for the Japanese athletes to run the First Stage with the Kenyans restricted to the shorter Third Stage.

With the mass popularity of the Hakone Ekiden ahead of them in university there is almost no chance any of the top ranks of this year's field would ever consider the NCAA, but imagine what an impact they could make if some lucky American school could somehow pull off a recruiting coup.  Regardless, the National High School Ekiden offers the chance to see future stars like Wanjiru and Karoki along with many of the contenders for the 2020 Tokyo Olympics team for the first time.

Brett Larner said…
The University of Colorado's 7-man 5000 m average is technically a 6-man average as I couldn't find a PB for Peterman. Feel free to post corrections here.
December 20, 2014 at 9:58 AM