Hiroshima's Sera H.S. delivered on the promise of its #1 ranking at the 65th National High School Boys Ekiden Championships, running away on the third of the 42.195 km race's seven stages and never looking back.  Sera got off to a slightly shaky start as its top Japanese runner Shiki Shinsako finished only 6th on the First Stage, 11 seconds behind Fuminori Shimo of #5-ranked Iga Hakuho H.S. who ran 29:39 to win the 10.0 km stage off a slow 15:10 first half.  Sera stayed at 6th on the 3.0 km Second Stage, but Kenyan ringer Paul Kamais did his duty on the 8.1075 km Third Stage, easily taking the lead and running a superb 22:58 just shy of the 22:40 course record set 10 years ago by the late great Samuel Wanjiru of Sendai Ikuei H.S. 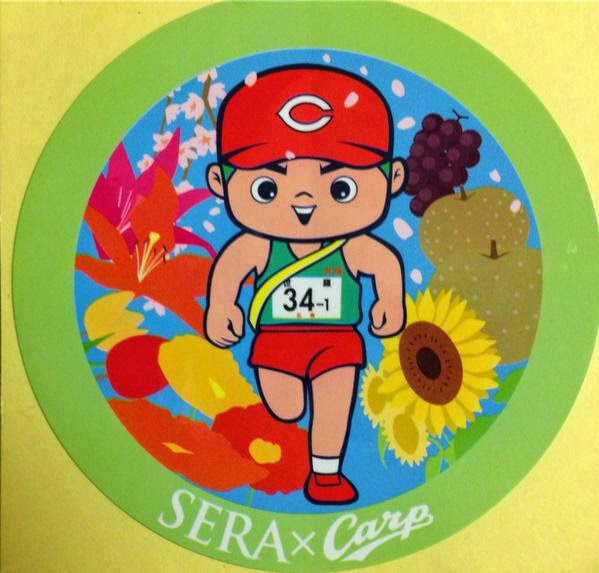 When Kamais was done Sera had gone from 18 seconds behind to a 51-second lead.  Its remaining runners could have played it safe, but both fourth runner Taiji Nakashima and sixth runner Hiroyuki Inoue ran stage bests to set up first-year anchor Keita Yoshida to bring the team home in 2:02:39, the fourth-best time in event history.  With five its seven members including Kamais returning next year it's very possible Sera could take a shot at Sendai Ikuei's legendary Wanjiru-era 2:01:32 course record in 2015.

#2-ranked Saku Chosei H.S. likewise ran up to potential, in the top three for the first two stages before dropping to 6th on the Third Stage.  From there it was a fight to regain ground against #5-ranked Iga Hakuho, #8-ranked Gakuho Ishikawa H.S., #9-ranked Akita Kogyo H.S., the Kenyan-powered Sendai Ikuei and the unexpectedly strong combo of Funabashi Civic H.S. and Saitama Sakae H.S.  Funabashi took the lead on the Second Stage as its 800 m national high school record holder Renya Maeda became just the second runner in history to break 8 minutes on the 3.0 km stage.  Over the next five stages the chase group shook down to Saku Chosei, Saitama Sakae and Akita Kogyo, all wearing orange uniforms, but the turnover behind them was constant.

At the start of the Seventh Stage Saku Chosei and Saitama Sakae were together in 2nd with a 15-second lead over Akita Kogyo.  Funabashi, Gakuho Ishikawa and Kobayashi H.S. were set for the podium, but at the handoff four schools were together in the race for 8th and the last seat at the award ceremony.  With #5-ranked Aichi H.S. making its first appearance at Nationals in 20 years, its anchor Kosuke Iijima took matters into his own hands with a big surge early in the stage to drop the other contenders and secure Aichi 8th.  Ahead, it came down to a track finish between Saku Chosei and Saitama Sakae to decide the medals, Saku Chosei's Kohei Sawa outkicking Saitama Sakae's Keisuke Takezawa with 300 m to go for 2nd in 2:04:36.  Akita Kogyo's 2:05:06 for 4th set school records for both time and place.  5th was decided in another sprint finish, Hikaru Makino of Kobayashi beating both Funabashi and Gakuho Ishikawa by 1 second.  Aichi's Iijima took 8th just 11 seconds back.