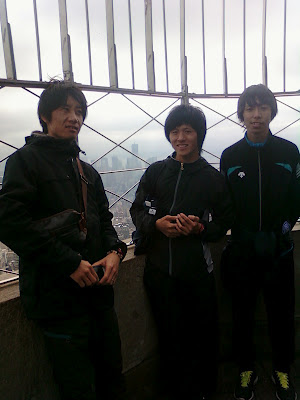 As part of a new relationship set up by JRN between the New York City Half Marathon and the Ageo City Half Marathon, sophomores Yuta Shitara and Kento Otsu of Hakone Ekiden course record setters Toyo University were invited to run this year's NYC Half after finishing 2nd and 3rd at last year's Ageo.  Just before their departure for New York from Narita Airport on March 14, the Ekiden News website talked with Shitara, Otsu and Toyo head coach Toshiyuki Sakai.

How did you feel when you first heard about your invitation to run the New York City Half Marathon?
Shitara: I was totally surprised.
Otsu: I’ve never been so happy. It’s my first overseas race and I’m really looking forward to it.

What has been your main focus from the end of the Hakone Ekiden up until today?
Shitara: I took some time off after Hakone, then ran the National Men’s Ekiden, then cross-country, each time focusing on the next race.
Otsu: Hakone marked the beginning of the new year, so instead of feeling like it was the end of the season I started setting my next goals and working towards them.

What are your goals and race plans for the NYC Half?
Shitara: My goal is to break my PB. I’m aiming to pick up the pace a lot in the last 5 km.
Otsu: I want to set a new PB too. Since this is my first time racing outside Japan I want to get as much out of the experience as I can to help me improve once we come back.

What do you want to bring back to the Toyo University team from this opportunity to run the NYC Half?
Shitara: I want to be able to show them that the door to racing overseas is open.
Otsu: What it’s like to run in an unpredictable race with shifting pace instead of the run-a-safe-pace-and-then-push-it type of race we usually have in Japan.

With the graduation of Toyo University’s captain Kashiwabara and the other seniors the team will take a different direction under its new captain Saito. Having won the Hakone Ekiden this year, what do you see for the team’s future? What message do you want to send to the incoming first-years?
Shitara: Toyo University became as strong as it has on the shoulders of this year’s graduating class. We owe it all to Kashiwabara and the other seniors. I want to show that kind of leadership to the younger members of the team through my own running. After the NYC Half I want to make the podium at the Kanto Regional University Track & Field Championships 10000 m.
Otsu: The seniors this year all had very strong character, and the seriousness with which they all approached their training and their lives, the way they each individually were always asking themselves, “What can I do to be better?” was a major influence on me. Up until Nationals [last November] I was never a starting member on the team, but they gave me the motivation to get serious [about making the Hakone Ekiden starting lineup] and to do what I had to do to get there. The same way that this year’s seniors taught me this, through their running instead of with words, I want to be able to show to the underclassmen. I want to make the top eight at the Kanto Regional University Track and Field Championships half marathon after New York.

What do you make of an opportunity like this one to compete against some of the best in the world in a race other than the Olympics or the World Championships?
Sakai: These days people target the Hakone Ekiden, but originally it was meant as a stepping stone to international competition. In terms of focusing on the rest of the world, on wearing the national colors and going to the Olympics or World Championships, in terms of renewing the system so that the first time our athletes are standing on the starting line of a world-level race they are not just there for the experience, an opportunity such as this one to run the NYC Half as a university student is extremely important.

Do you plan to become more active in taking on these kinds of overseas opportunities after this as well?
Sakai: The domestic university championships and ekidens are our number one priority, but I’d like to start having more of our runners taking on the marathon. If you race overseas you have to deal with issues of differences in culture, food, weather, jet lag, travel problems, and the like which in many ways make it a different situation from racing domestically, but you have to learn to be able to run up to your potential even when faced with difficulties and in that respect when the opportunity to race overseas is there it’s important to take it.

At this year’s Hakone Ekiden the Toyo University team put a clear emphasis on speed over distances longer than 20 km, showing clearly how strong they are.
Sakai: I think there’s still a pretty big disparity in terms of what we can do on the track relative to world standards, but the goal here is to take what we’ve been able to accomplish at the 20+ km distance and see how far that can take us against some of the best in the world.

Are you thinking of this NYC Half more in terms of building experience or actually getting results?
Sakai: Well, in terms of results, if they try to race some of these 59 minute or 60 minute athletes they will be running faster than the Japanese national record pace, so that might be a little much. But I do want them to be an active part of the front end of the race, not just passively hanging on to the rear of the pack. On the track and in the marathon it’s become increasingly more difficult to be internationally competitive, so I feel strongly that we have to make changes to our way of doing things, and to look carefully at the corporate system.

On the domestic race circuit just about the only chance to race against corporate runners is at Marugame, so there are few opportunities for the best university runners to face top-quality competition over the half-marathon distance. Both Otsu and Shitara are second-years, so I want them to get a lot out of their NYC Half experience, to run the way they would be unafraid to go after the best corporate runners, and through that to take a more and more leading role in the Japanese athletics world.

Both runners said that they are already targeting podium finishes at the Kanto Championships now before NYC.
Sakai: I think they are looking at it in terms of this international experience giving them a big edge once they go back to the university championships. It’s not just a question of tactics but of learning to make the race yourself. I want them to become aggressive racers, not just competing against whoever happens to be right there.

What has their training been like since the Hakone Ekiden, and what is the race plan in the NYC Half?
Sakai: Both of them ran the National Men’s Ekiden and the Chiba and Fukuoka XC meets, so by using races as part of their preparations I think they are sharp and primed. In the NYC Half I don’t think the section through Central Park will be that fast, so I anticipate them running in the lead pack through the park and then picking it up once they get out onto the roads. I’m sure the leaders will be changing gears a lot and I hope that Otsu and Shitara will be able to stay with at least one of the big moves and to play a part in making the race themselves. They both have a lot of ability over longer distances, so I’d like to see them come out of this as top-ranked university athletes over the half.

Finally, can we look forward to seeing them run in the dark blue ekiden season Toyo University uniforms?
Sakai: Yes, they’ll be wearing the blue uniforms.

Otsu and Shitara are two athletes who had probably never even thought about the possibility of racing overseas, but as their coach tells them, “If you don’t try to change the world then there’s no future.” This year’s New York City Half Marathon is another signal that Japan is on its way back to becoming strong again.