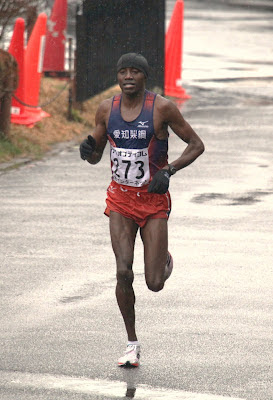 Hot on the heels of a record-setting morning of half-marathon action across the country, the 67th Lake Biwa Mainichi Marathon, Japan's final domestic selection race for its London Olympics men's marathon team, was tense and exciting, with a string of strong debuts, a national record, and an unexpected last-minute Olympic berth upset making up most of the major results in the top ten.

In cold, rainy conditions Japan-based Kenyan Samuel Ndungu (Team Aichi Seiko) was the surprise winner, marking a steady 2:07:04 debut time for the win.  Ndungu sat tight in the lead pack, which stayed on low-2:07 pace throughout the race, through km in 30:12, 20 km in 1:00:22 and halfway in 1:03:38.  Virtually the entire elite field and the upper echelons of the general division went with him, more than forty men still in contention at halfway.  Some of the few early casualties included Australia's Lee Troop, Canadian Dylan Wykes, and 2:11:00 man Naoto Yoneda (Team Konica Minolta).  All three dropped out of the race, Troop with calf trouble and Wykes with stomach problems.  All the other major contenders spent time hovering near the front of the pack, including Japanese favorite Hiroyuki Horibata (Team Asahi Kasei) who had at least two collisions with other runners.

Rounding the turnaround the pace quickened, and after 24 km Ndungu moved to the forefront as people set up for the pacers' departure at 25 km.  Top seed Nicholas Manza (Kenya) went out hard at 25 km to break up the pack, with Bekana Daba (Ethiopia) following suit to open a gap and push the next km to 2:51.  The lead group quickly diluted to eight, including Ndungu, Horibata, Manza and Daba along with Moroccan Abdellah Taghrafet, Poland's Henryk Szost, Nairobi Marathon winner Ernest Kebenei (Kenya), and, in his marathon debut, Aoyama Gakuin University junior Takehiro Deki.  Further back an all-Japanese second pack assembled with Kentaro Nakamoto (Team Yasukawa Denki), Ryo Yamamoto (Team Sagawa Express), Takashi Horiguchi (Team Honda), Tomoyuki Morita (Team Kanebo) and Masashi Hayashi (Team Yakult) all hanging on to a more sensible pace in hopes of running down casualties later in the race. 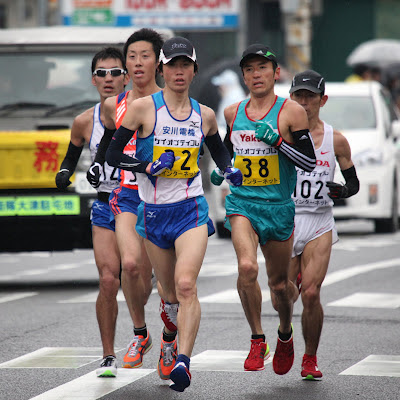 As the front group tried to reel Daba back in Deki pushed to the lead of the pack at 28 km, forcing the others to work harder and upping the energy of the situation.  Regaining contact the group of eight went through 30 km in 1:30:14, 2:06:55 pace, with the second Japanese pack around 15 seconds back.  Deki, who along with his coach Susumu Hara earlier this week told JRN that he had not trained specifically to make a marathon debut at this point and was only doing it for future experience, with only two weeks of mileage training including three 30 km runs in one week off his Hakone Ekiden fitness behind him, recklessly pushed to the front of the race as Horibata began to look haggard.  The race announcers' voices turned gleeful and Twitter exploded as Deki, totally unaware of but likewise unafraid to face what waited for him after 30 km, pushed on.

A km later Ndungu took things in hand, dropping what proved to be the race-ending surge.  Taghrafet and Szost worked together a distance back, with Daba, Horibata and Kebenei forming the next group, Manza and Deki in a pair, and farther back the Japanese chase pack led by Daegu World Championships team member Nakamoto.  As the rain intensified Ndungu pushed on all the way to the finish, staying on low-2:07 pace to end with a small negative split and the second-fastest time of the year so far by a Kenyan man, 2:07:04.  Szost and Taghrafet continued to push each other until late in the race Szost cast off to smash the Polish national record by two minutes in 2:07:39 for 2nd, Taghrafet lagging behind and just missing his PB as he took 3rd in 2:08:37.  The rest of the race was more unpredictable. 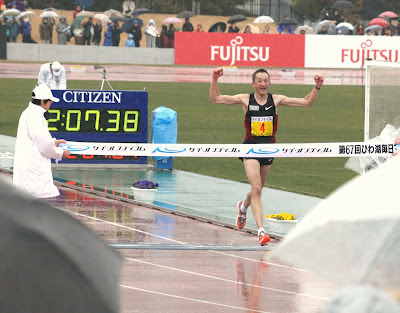 Manza faltered, then dropped out.  Daba faltered, then dropped out.  Deki, in completely uncharted territory, advanced on Horibata.  Behind him, Nakamoto, a college teammate of the Tokyo Marathon's top Japanese man Arata Fujiwara (Tokyo T&F Assoc.) and 2:12 man Horiguchi, a teammate of 10000 m world champion Ibrahim Jeilan, picked up the pace to drop the rest of the Japanese pack and catch Deki with 7 km to go.  Nakamoto went into another gear to get rid of Horiguchi just before making contact with Horibata, while simultaneously Yamamoto went by Deki.  With all five of the top Japanese still on sub-2:09 pace it was turning into a wild race for the Olympics.  If the second Japanese man broke the 2:08:38 time run by Tokyo's second Japanese man Kazuhiro Maeda (Team Kyudenko) then two men from Lake Biwa would have a good chance for the team.

Right on pace to break 2:08, Nakamoto went by Horibata and then the slowing Kebenei, moving up to 4th with 4 km and looking solid for an Olympic berth.  But behind him the unheralded Yamamoto, with a PB of only 2:12:10 from the hot and humid Hokkaido Marathon, was coming on strong, closing down the gap quickly as he knocked favorite Horibata out of the 2nd Japanese position and Olympic contention.  At 40 km the lights seemed to suddenly go out for Nakamoto as Yamamoto bore down.  He rallied in the last km, but Yamamoto was right behind him coming onto the track and kicked by with 400 m to go to take the top Japanese spot in 2:08:44, a PB by nearly four minutes over Nakamoto's 2:08:53, also a PB. 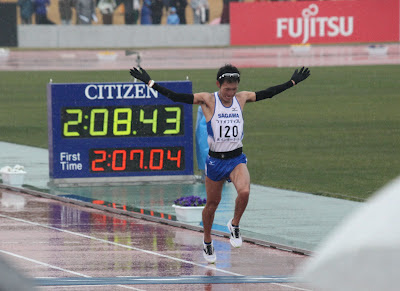 The remainder of the Japanese chase pack succeeded in overtaking lead pack runners Horibata and Deki, with Morita running the all-time #3 Japanese debut marathon of 2:09:12 for 6th and veterans Horiguchi and Hayashi both breaking 2:10 for the first time.  In a sprint finish Deki incredibly ran down Kebenei and Horibata to finish in 2:10:02, agonizingly close to a sub-2:10 but still the third-fastest ever by a Japanese collegiate, the all-time #9 Japanese debut, and gutsy considering he was on 2:06 pace at 30 km with no training runs longer than 30 km.  Post-race Deki told JRN, "For a second there I thought about the Olympics."  Kebenei clocked a small PB of 2:10:04 to round out the top ten, one step ahead of Horibata who collapsed after taking 11th in 2:10:05.  One second behind Horibata was Italy's Ruggero Pertile, who also finished seconds behind Horibata in Daegu.

In just two races a week apart Japan is already having one of its best-ever years, with one 2:07, three 2:08s, four 2:09s, and a collegiate 2:10:02, all either PBs or debuts.  While there is still a large amount of ground to make up it's a sure sign that the post-Beijing malaise has finally turned back around.  Looking at the London Olympic team, Fujiwara and Yamamoto are both locks with their 2:07:48 and 2:08:44 from Tokyo and Lake Biwa.  Up for contention for the third spot are Tokyo's second Japanese man, Maeda, 6th in 2:08:38 after finishing 6th in 2:11:46 at the Fukuoka selection race, Nakamoto with his 2:08:53 for 5th and 2nd Japanese man today and a 2:13:10 for 10th at the Daegu World Championships, Yuki Kawauchi (Saitama Pref.) with a 2:09:57 for 3rd and the top Japanese spot in Fukuoka followed by a 14th-place 2:12:51 in Tokyo, and Horibata with a 7th place 2:11:52 and the Daegu World Championships and a 2:10:05 for 11th today.  Although Maeda is the most likely candidate there's a case to made for each of them.  The official decision will not be made until Mar. 12 following the Nagoya Women's Marathon, the last of the women's selection races. 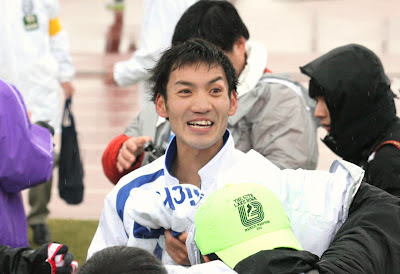 TokyoRacer said…
It was a fun race to watch.
Deki was really impressive in not falling apart after falling off the pace, and even managing a good kick. You picked the right guy to interview.
March 4, 2012 at 6:54 PM

Brett Larner said…
Thanks. I didn't pick him by accident.

Brett Larner said…
Thanks to a question from Running Times' Scott Douglas I found that this was the third-greatest Japanese men's single-race performance ever: