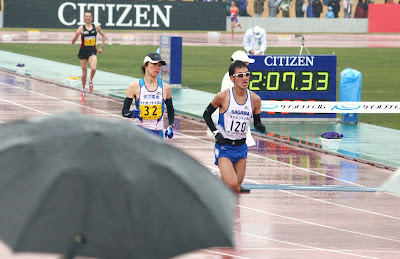 9 seconds.  In a turbulent battle for the a Japanese ticket to the London Olympics, Kentaro Nakamoto (Team Yasukawa Denki) lost his leading Japanese position to Ryo Yamamoto (Team Sagawa Express) with 400 m to go on the track at the Mar. 4 Lake Biwa Mainichi Marathon.  "In one word, devastation.  It was a huge shock when he passed me.  I'm crushed," Nakamoto said after the race, downcast and tremendously disappointed. 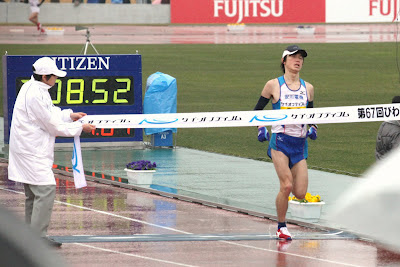 Nakamoto lost touch with the leaders at one point in the race, but saving up his strength he attacked in the second half to pass top Japanese man Hiroyuki Horibata (Team Asahi Kasei) at 38 km and assume the leading position in the race for the Olympic team.  But the astoshing strength with which Yamamoto pursued and ran him down was completely unexpected.  "I thought I'd make it if I kept going like that," said Nakamoto of the swift turn from sweetness to misery. 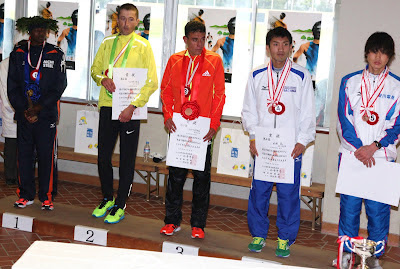 With a time of 2:08:53 Nakamoto broke his best of 2:09:31 set at last year's Lake Biwa.  His hopes of making the Olympic team are not complete lost, but, he says, "I'm not strong enough.  My task now is to improve my speed," a characteristically frank self-evaluation as he looks to what comes next.