Gharib Joins the Club With Fukuoka Win (updated with video)

The top-seeded man in the field at the 2010 Fukuoka International Marathon, Beijing Olympics silver medalist and two-time World Champion Jaouad Gharib (Morocco) completed four straight years of Fukuoka domination by the Beijing medalists, running 2:08:24 to join Beijing gold medalist Samuel Wanjiru (Kenya) and Beijing bronze medalist Tsegaye Kebede (Ethiopia) in the Fukuoka winner's club. On a cloudless day with temperatures approaching 20 degrees most of the field wilted in the heat, but proven heat runner Gharib had little difficulty dispatching the competition even if he was not completely immune to the temperature effects.

After a slower than planned first 5 km a ponytailed Kenta Oshima (Team Nissin Shokuhin) injected a bit of speed by running ahead of the pacemakers to induce them to pick it up. The first casualty was the biggest hope for a breakthrough star, Atsushi Ikawa (Team Otsuka Seiyaku). Things settled down until 15 km when the race abruptly went crazy. Kenyan pacemaker Eliud Kiptanui, who shockingly broke 2:06 at last spring's Prague Marathon, suddenly took off, splitting 14:15 from 15 km to 20 km. Gharib, recovered from the hernia surgery that kept him out of competition this summer, was the only one to try to go after him, splitting 14:32 and running the rest of the race completely alone in no-man's land. Pacemaker Nicholas Kiprono (Uganda) picked up his own turnover somewhat and was followed by last year's 2nd and 3rd placers Tekeste Kebede (Ethiopia) and Dmytro Baranovskyy (Ukraine) and, in his second marathon, the much-respected former Hakone Ekiden star Masato Imai (Team Toyota Kyushu). A larger pack including Satoshi Irifune (Team Kanebo), Norio Kamijo (Team Aichi Seiko), Min Kim (South Korea), Takayuki Matsumiya (Team Konica Minolta), Dmitriy Safronov (Russia) and Chiharu Takada (Team JR Higashi Nihon) continued on unchanged behind pacer Samson Ramadhani (Tanzania).

Kiptanui executed a baffling performance. With such a hard surge so early on he must have been attempting to steal the race rather than complete his pacemaking duties, going through halfway in 1:02:58 with Gharib 16 seconds back. The chase pack containing Imai hit the split in 1:03:47, less than 20 seconds off Imai's time at October's World Half Marathon Championships. By 25 km Kiptanui was losing steam, Gharib only 11 seconds behind. At 30 km the gap was down to 8 seconds when Kiptanui was abruptly pulled out of the race at the end of his appointed pacing segment by an official who blocked his path with a large red flag. It was a bizarre run which will no doubt not be leading to other pacemaking work. 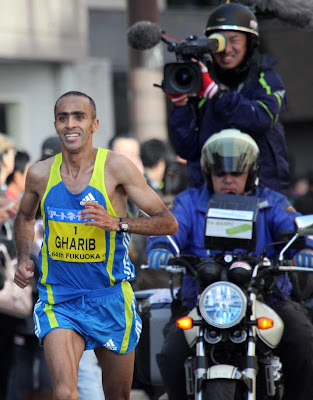 Everybody had a good time.

Now safely in the lead, Gharib pushed on in rising temperatures before going into cruise mode, splitting 15:45 between 35 km and 40 km. The chase pack of three with pacer Kiprono likewise slowed, and as a 2:07 slipped out of reach and their projected time approached 2:09 Tekeste lost patience and surged. Imai responded but Baranovskyy, always solid in the colder temperatures in his first three Fukuokas, slipped away. Imai, a former teammate and training partner of Samuel Wanjiru's and coached by Barcelona Olympics silver medalist Koichi Morishita, ground away but was unexpectedly overtaken by an impressively mustachioed Safronov, who sailed on to overtake Tekeste with ease. Imai's trademark clenched-teeth grimace made its first appearance since his days as the star of the Hakone Ekiden's uphill Fifth Stage, and as the cameras shifted back it became clear that 5000 m and 30 km national record holder Matsumiya and the little-known Takada were bearing down on him.

As Gharib and Safronov went on to meet the inevitable, Safronov in a solid PB, Imai retook the fading Tekeste but was in turn dispatched by Matsumiya. Matsumiya has thus far fallen far short of his potential in the marathon and pre-race had vowed to run conservatively for 30 km and then go all out. He lived up to his word, splitting nearly 30 seconds faster than Gharib between 35 and 40 km, but it was clear that the big prize was out of reach, the sub-2:10 which, after happening ten times in 2008, has for the last two years inexplicably eluded all but two Japanese men. Matsumiya finished 3rd in 2:10:54, the top Japanese man but far short of the sub-2:09:30 established by Rikuren as the time requirement for a guaranteed spot on next summer's World Championships squad. Takada advanced to 4th just before the final lap of the track, clocking a 2-minute PB. Imai, paying the price for his ambitious, perhaps unrealistic, first half, staggered in to 5th in 2:13:23, a 5-minute PB just seconds faster than what would be expected based on his 1:03:38 half marathon in October but doubtlessly a performance with which he is disappointed. 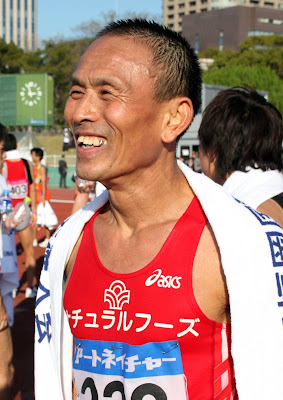 61 year-old Yoshihisa Hosaka does it again.

The absence of any sub-2:10 times by Japanese runners means that Arata Fujiwara's 2:09:34 course record win at May's Ottawa Marathon remains the only mark of the year at that level, a disappointing outcome. To be fair, all three of the major domestic Japanese men's marathons this year experienced abnormally poor weather and performances are generally weaker in Asian Games years, but the extent of the lack of men clocking times which just two years ago were a given remains a cause of great concern and consternation in Japan. The London Olympics look likely to be a wash, but with the unprecedented level of quality in Japan's current under-25 generation it can only be hoped that things will be back on track by Rio.

Jon in Tokyo said…
As always thanks for the information. Very informative.
December 5, 2010 at 8:17 PM