Update: JRN's translation of this article has been translated into Italian here. 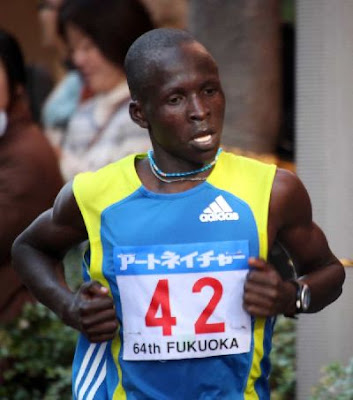 You're the fastest runner but you're not allowed to win.

At last weekend's Fukuoka International Marathon, a bizarre happening took place which left race officials saying, "We've never heard of something like this before." A pacemaker hired to lead part of the race at a designated speed took off with reckless abandon, creating chaos in the race behind him. What is the role of pacemakers in a marathon?

The Fukuoka International Marathon hired four official pacemakers this year. However, at 15 km one of them, Eliud Kiptanui (Kenya) abruptly accelerated, ignoring his agreement with race officials to "Run under 15:10 per 5 km until the 31 km turnaround." From 15 to 20 km Kiptanui split an incredible 14:15. At 30 km a course marshall with a red flag blocked Kiptani's path, bringing to an end his bizarre performance. Rikuren director Keisuke Sawaki scoffed, "This pacemaker was an embarrassment. He ruined the race." The top Japanese athletes in the field appeared confused afterwards, saying, "Nobody told us the pacemaker was going to do something like that."

Pacemakers have two roles in races, one to prevent them from becoming slow, tactical affairs and the other to help athletes shooting for fast times. They are also known as 'rabbits,' after the mechanical pacer used in dog racing. The practice of their use became widespread overseas in the 80's and was introduced to Japan in the 90's. Recognizing that "Fast times depend on the use of pacemakers," Rikuren first introduced them in the Fukuoka International Marathon in 2003.

In the past athletes often hired individual pacemakers, but race organizers now contract with foreign agents to supply suitable runners for the job in return for pay. Race organizers determine the pace to be run based on the weather and goals of the top elites in the field. In Japan they are usually instructed to run roughly 15 minutes per 5 km in order to aim for times in the 2:07 range, and are typically instructed to run to either halfway or 30 km. The role of each pacemaker varies based on the distance they are assigned to run. This time, Japanese runner Kohei Matsumura (Team Mitsubishi Juko Nagasaki) was employed to control the pace until 15 km, at which point Kiptanui was to take over leading the front pack.

With a mark of 2:05:39 Kiptanui had the best PB in the field after winner Jaouad Gharib (Morocco), but at age 21 he has little professional experience. Before the race he asked officials, "May I finish the race?" He was told in no uncertain terms, "No way. Absolutely not. We will not pay you."

The rulebook says that all athletes in the field may finish the race and have their times officially recorded, and it sometimes happens in major marathons that a pacemaker goes all the way and wins. However in many situations races seek to prevent this from happening by stipulating in the athlete's contract that they will not receive their payment should they finish the race, and so pacemakers usually stop. I don't know what was going on inside Kiptanui's head, but a race organizer said afterwards, "It may well be the case that his agent [Volker Wagner] did not adequately explain the terms of Kiptanui's participation to him."

Recently young Japanese athletes have begun to be given the chance to gain top-level marathon experience through pacemaking work. Rikuren plans to employ young Japanese women as pacemakers in all three of next spring's domestic selection races for the 2011 World Championships marathon team. In so doing the young athletes get a firsthand feel for the speed and atmosphere of the marathon, a good first step toward their marathon careers. As with Matsumura in Fukuoka, the practice has already begun in the men's races.

Rikuren vice-director of road racing Takumi Kawano, acknowledged the benefits of this plan, saying, "It will help to overcome the wall to standing on the marathon's starting line among our young people." However, looking toward the Olympics and the World Championships where the emphasis is on winning rather than fast times and pacemakers are not allowed, some people in the industry are saying that young, up-and-coming runners who get used to just running behind a pacemaker, "are never going to get the kind of racing instincts they will need in order to win."

Translator's note: Dr. Helmut Winter, who was present at this year's Fukuoka International Marathon, posted an article on the German Road Races website including a critique of the decision to physically prevent Kiptanui from finishing. German speakers click here to read it.

TokyoRacer said…
To answer 666: It's a bit more complicated than that. He was obviously doing something wrong: he was not running the pace that he was contracted to run. and he did not stop when he was contracted to stop. The real question is, was he an "official entrant," or was he merely a "guest runner"? Mu guess is that he was not an official entrant, and therefore was not eligible to win the top prize money. If that was the case, should he have been allowed to finish (and his result voided)? No, because the other runners in the race did not know that his result would be voided. So he was screwing up their races. So the officials were right to stop him.
December 12, 2010 at 9:20 PM

Anonymous said…
According to that German article Kiptanui afterwards claimed that it had never been his intention to finish the race...

Anonymous said…
If he was an official entrant then he should be eligible for prize money but forfe any money regards pacing duties.Obviously his agent and him were not on the same page.
December 13, 2010 at 2:46 PM