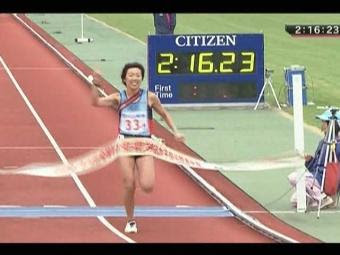 An Okayama Prefecture team made up primarily of members of the pro Team Tenmaya and the elite Kojokan H.S. derailed hometown hosts Kyoto Prefecture's bid for a sixth-straight National Interprefectural Women's Ekiden win on Jan. 17. Okayama took its first-ever national title, winning the nine-stage, 42.195 km event in 2:16:24 thanks to stage best runs by members Kaori Urata and Katsuki Suga and a new stage record by Kojokan H.S. first-year Mahiro Akamatsu. Okayama's anchor, Olympic marathoner and World Championships track runner Yurika Nakamura, was only 8th on stage time but had a big enough lead to hold off Chiba Prefecture anchor Hitomi Niiya by 15 seconds.

Chiba's best-ever 2nd place showing was a surprise and came thanks in large part to strong performances by its first three runners. Second Stage runner Yuriko Kozaki, a high school first-year, unexpectedly took the lead away from five-time defending champion Kyoto Prefecture. Both she and junior high school Third Stage runner Sakiko Naito were impressively smooth and powerful in their national debuts. Niiya, last year's anchor stage winner, tried her best to run down Nakamura but although she clocked 26 seconds faster than Nakamura could not close the final gap and had to settle for runner-up, one of only three women to break 32 minutes on the stage.

Kyoto Prefecture started off in first after 2009 World University Games 10000 m gold medalist Kasumi Nishihara predictably dispatched all rivals but fell behind after a sub-par performance from Second Stage runner Mari Ozaki, a veteran who is making a marathon comeback in two weeks in Osaka. After only average performances by twin sisters Moe and Haruka Kyuma on the middle stages Kyoto's chances of a defense were in danger as the team sat in 7th. Like Niiya, anchor Kazue Kojima did her best to make up the gap to the lead but could only get as far as 3rd. In so doing she held off World Championships marathoners Yoshimi Ozaki and Yoshiko Fujinaga and finished 4th on the stage on time in the last ekiden of her university career.

Missing star Yuriko Kobayashi, Hyogo Prefecture continued to slide one place and finished 4th after coming in 3rd last year and 2nd in 2008. After starting the ekiden in 34th the team slowly worked its way back up. It took Minami Nakaarai's stage best on the Seventh Stage to keep the team in contention, but although she advanced the team to 3rd anchor Shiho Takechi was unable to hold off Kyoto's Kojima.

Osaka Prefecture's Ryoko Kizaki, who tied Yurika Nakamura for the best time on the First Stage last year, was again tough and fast as she took the best time on the Fourth Stage. Kizaki makes her marathon debut in two weeks in Osaka. 3000 m, 5000 m and half marathon national record holder Kayoko Fukushi of Aomori Prefecture continued her comeback this season with a stage best of 31:03, passing fifteen teams along the way.

TokyoRacer said…
When Brett says "impressively smooth and powerful" some readers may think, they're only junior high and first-year high school kids, how smooth and powerful can they be? Well, believe me, they looked great. Much better form than Nakamura and many of the top Japanese women. They were running under 3:10/k and looked like they were cruising. And there were several others, too. There was a 2nd year HS girl who has run a 15:38. Impressive is definitely the word for a lot of these young Japanese.
January 17, 2010 at 7:52 PM

yuza said…
Brett! I was unable to watch yesterday's race, because I was snowboarding, but I am curious to know about the last leg.

Fukushi's time of 31:03 is well quick and I am wondering whether it was slightly downhill? Either way it was a good run. We can only hope that she will decide to run a marathon this year.

Brett Larner said…
Yuza--Yes, the 9th stage has a downhill. I think it's around 40 or 50 m, so times are on the quick side all around. Likewise, we were hoping Niiya was going to catch up to Nakamura and give her a race at the end but she was just out of range.

As I said in my writeup, at least looking at the performances they actually showed on TV I have to go with Akamatsu, Kozaki and Naito for the most memorable of the ekiden. Kozaki in particular, even though she didn't get the stage best.
January 18, 2010 at 6:49 PM