The Association of Road Running Statisticians (ARRS), released its annually-updated rankings of the world's top road races at the end of December. Using a formula which scores races in terms of both quality and depth of performances, the ARRS listings give an indication of a race's overall level over the course of its history relative to other comparable races. The top three races worldwide at each distance in which at least one scored over 1000 points are reproduced below. Click table for a larger image. Click here to see more detailed listings on the ARRS website. 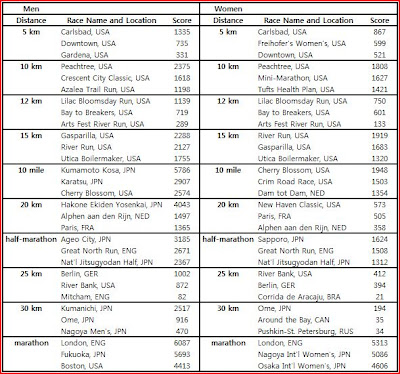 International championship events held in different countries each edition are excluded from the above summary. Three races fall into this category: the IAAF Women's 15 km World Championships and the IAAF Men's and Women's World Half Marathon Championships.

The table below lists the 25 highest-scoring races worldwide for both men and women. International championship events held in different countries each edition are excluded but listed at the bottom. Click table for larger version. 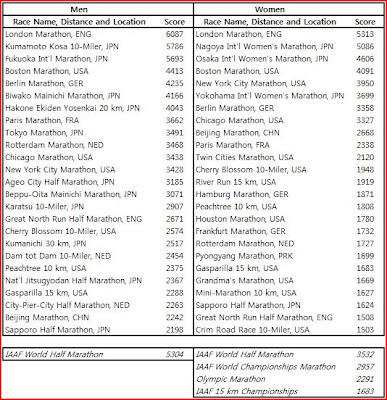 The ARRS considers the Tokyo Marathon and Yokohama International Women's Marathon, which at the elite level have the same organizers as the now-disbanded Tokyo International Marathon men's and women's races respectively, to be continuations of the older races, and the rankings for these two races reflect this.