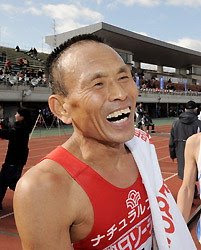 At the 58th Beppu-Oita Mainichi Marathon on Feb. 1, the oldest runner to ever qualify for the elite race, 60 year-old Yoshihisa Hosaka, (Shizuoka Track and Field AC), turned back the years with a run of sparkling brilliance. Finishing 89th overall in 2:36:30, Hosaka broke the existing 60+ world record by 1 minute and 45 seconds. He was smiling broadly at his astounding achievement as he reached the finish line.

Hosaka began running at age 36 when he joined a friend's ekiden team. At age 42 he won his first race at a local event in his hometown. For his first marathon he ran the popular Honolulu Marathon, where he ran a superb 2:31:19. Finding a deep joy in running, Hosaka had by the end of 2008 completed 70 marathons. To get ready to attack the world record in his first race as a 60 year-old Hosaka trained 30 km per day.

On race day, word of Hosaka's attempt on the world record spread along the course after TV coverage showed him smiling and giving an enthusiastic OK sign to the cameras in the first 10 km of the race. As he ran voices called out encouragement and urged him on to the record. At the 27 km point the large crowd of marathon fans gathered in front of the Oita Prefectural Police Headquarters hung banners of support for Hosaka and grew raucous as he drew near. Suffering from an inury to his right calf which flared up just before the race Hosaka was not feeling 100%, but, he said, "The cheering along the course was so incredible that I got goosebumps as I was running. It was what kept me going."

After 35 km a pack of runners surrounded Hosaka and pulled him along. When he dropped behind other runners soon came along and likewise gave him their support, telling him, "Hosaka, let's go!" and "Come on, let's do it!" as they ran together.

His 42.195 km in Beppu-Oita were full of bitter pain, but as always for Hosaka it was in the end simply fun. When he returned to the stadium for the race's final 400 m he was visibly unsteady on his feet but he continued forward to the goal line with every bit of effort in his body. The LED display of the finish clock counted out a silent testimony for all to see as Hosaka crossed the line with his fists raised in the air, shouting out, "I did it!" His fellow amateur runners surrounded him in disbelief, cheering and calling out their congratulations in warmhearted camaraderie. Deeply moved by the efforts of spectators and fellow runners alike to help him reach his target, Hosaka was thankful as he said, "It was the best. There is no other amateur runner anywhere as happy as I am." 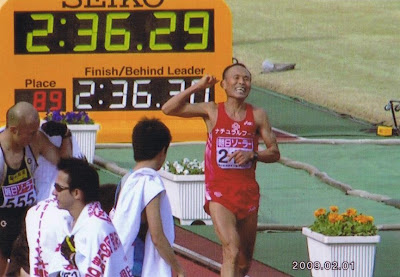 Pending ratification of his mark by the World Masters Athletics association, Hosaka's time will become the official new world record. The WMA recognizes records in five-year age-group categories. "When I hit 65 maybe I'll try for that record next," laughed Hosaka. "How old can I go? I'm going to keep running as long as I can."

Translator's note: Averaging the results of various age-grading tables, Hosaka's run is an age-graded equivalent to 2:07:35. His Beppu-Oita splits are available here. His halfway split of 1:16:52, age-graded, is equivalent to 1:01:59 and was run into a strong headwind which caused the lead pack to lose around one minute from their target pace between 11 km and halfway. The previous record holder was Italian Luciano Aquarone, whose time of 2:38:15 had stood since 1991.

Update: I came across an old Running Times interview with Hosaka from 2002. Read it here.

Brett Larner said…
I think too it's impressive that even though he runs 30k a day he is still a shimin runner, i.e. an amateur. I don't think there are any 30ish amateurs out there running 2:07.

Personally I think his first half was more impressive than the end result considering the wind and the fact that it was the first half of a marathon which was a planned world record attempt.

Hosaka was on the same shuttle bus as me after the race and he looked pretty much the way he does in this photo.
February 3, 2009 at 2:27 PM

Anonymous said…
Man, that is an incredibly inspirational story. Hosaka is an amazing runner, and sounds like a very nice guy too. Plus, the support he got from the growd and other runners was great. Thanks for posting this story.
February 4, 2009 at 1:56 AM

Anonymous said…
no matter your age or abilities if this doesn't get you out the door nothing will...tremendous!!

Anonymous said…
As I prepare to go to the 8K M60 US Cross Country Championships in Maryland on Saturday I bet Yoshihisa could run 21 miles then run the final 5 with us and win the race. He is remarkable.
Doug Brown
Raritan Valley Road Runners
February 4, 2009 at 5:30 AM

Anonymous said…
Amazing! Thanks for sharing this along with letsrun.com here in the U.S.
February 5, 2009 at 1:33 PM