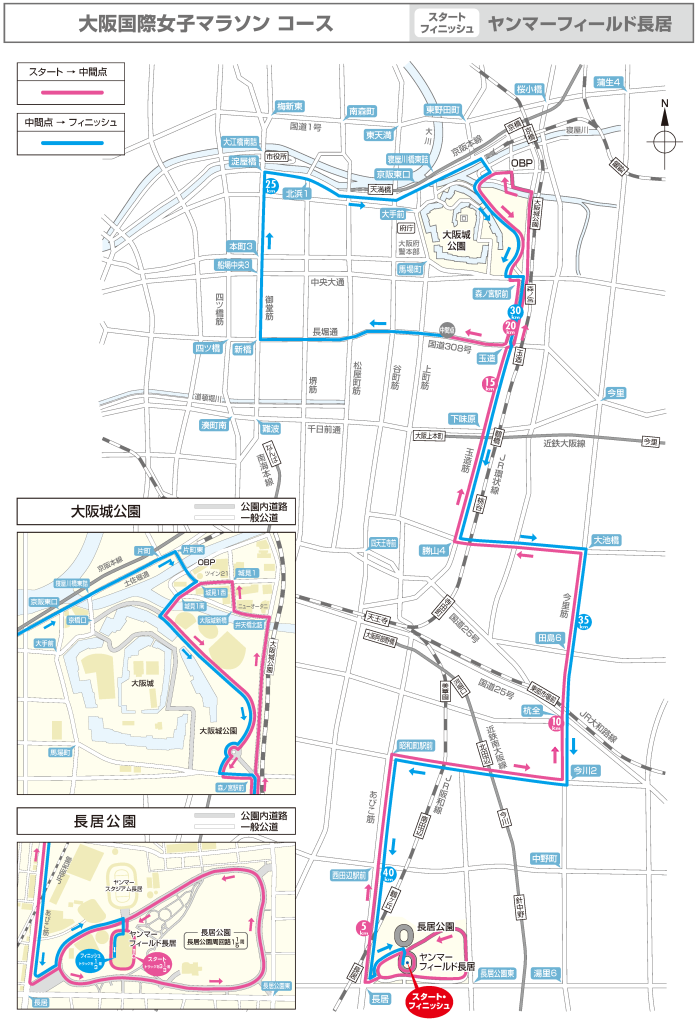 Part of the course for the 42nd Osaka International Women's Marathon to be held on Jan. 29 next year will changed, doubling its maximum elevation difference to 18 m with a hilly new section. 2004 Athens Olympics marathon gold medalist and national record holder Mizuki Noguchi was optimistic about the course change helping to produce fast times, saying, "When there are moderate undulations it's easier to get into a rhythm."
Noguchi had success at the Olympics and elsewhere by attacking on hills. The new section of the Osaka International course on Nagahori-dori after 20 km features a series of uphills and downhills. Noguchi expects the section to play an important part in the race. "People might be thinking of changing the dynamic there, of shaking up the lead group. It's going to be a good thing."
Another key change on the course is the elimination of the turnaround point at Midosuji just before 30 km. "If there's a 180˚ turn you have to slow down, and there's a chance of twisting your ankle," said Noguchi. "There'll be less chance of accidents now." On the new sections of the course spectators will now be able to get closer to the runners. "Their voices will really jump out at the runners," Noguchi said.
It has now been 17 years since Noguchi ran the Japanese national record of 2:19:12. But at last year's Osaka International Women's Marathon Mizuki Matsuda (Daihatsu) ran an event record 2:20:52. Hopes are high that with the course change Osaka will see a Japanese woman run 2:19 on Japanese soil for the first time. "I don't want people just to shoot for sub-2:20. Sub-2:20 is a must," Noguchi said. "These days 2:19 is a given at the international level, and people have to be hitting that kind of time."
source articles:
https://www.sankei.com/article/20220928-F6IRSX7CTRO4NH5MMO6AA6WN6M/
https://www.sankei.com/article/20220928-XJSEPEVD7JKZDIDUJYDT3FMX2A/
translated and edited by Brett Larner

Stefan said…
Noguchi's comments ring true. At the very least, if you wish to compete against the world's best then you need to be posting 2:19 (ideally 2:15:37 if you want to win Berlin!). The gap between the World's best vs Japan's best marathoners seems quite large these days. I'm confident this generation of Japanese marathoners will raise their level next year.
September 29, 2022 at 11:10 AM