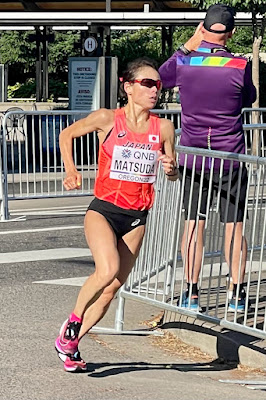 2022 Oregon World Championships marathoner Mizuki Matsuda (Daihatsu) announced on her social media on Sept. 18 that she had gotten married earlier that day to an ordinary, non-athlete man. "I'm grateful to him for accepting my wish not to retire and to keep competing," she wrote. Along with the text she posted a picture of herself with her new husband, a graduate of Aoyama Gakuin University.
One of Japan's top domestic athletes, the 29-year-old Matsuda won her marathon debut at the 2018 Osaka International Women's Marathon. She was named alternate to the Tokyo Olympics team after finishing 4th at the MGC Olympic marathon trials. She was 9th at July's World Championships in Oregon. Having announced that she won't retire now that she is married, fans can look forward to more from her.
photo © 2022 Brett Larner, all rights reserved
source article:
https://news.yahoo.co.jp/articles/13eb3a4dde977d4fe6112e18d7d07a6af5409a3f
translated by Brett Larner