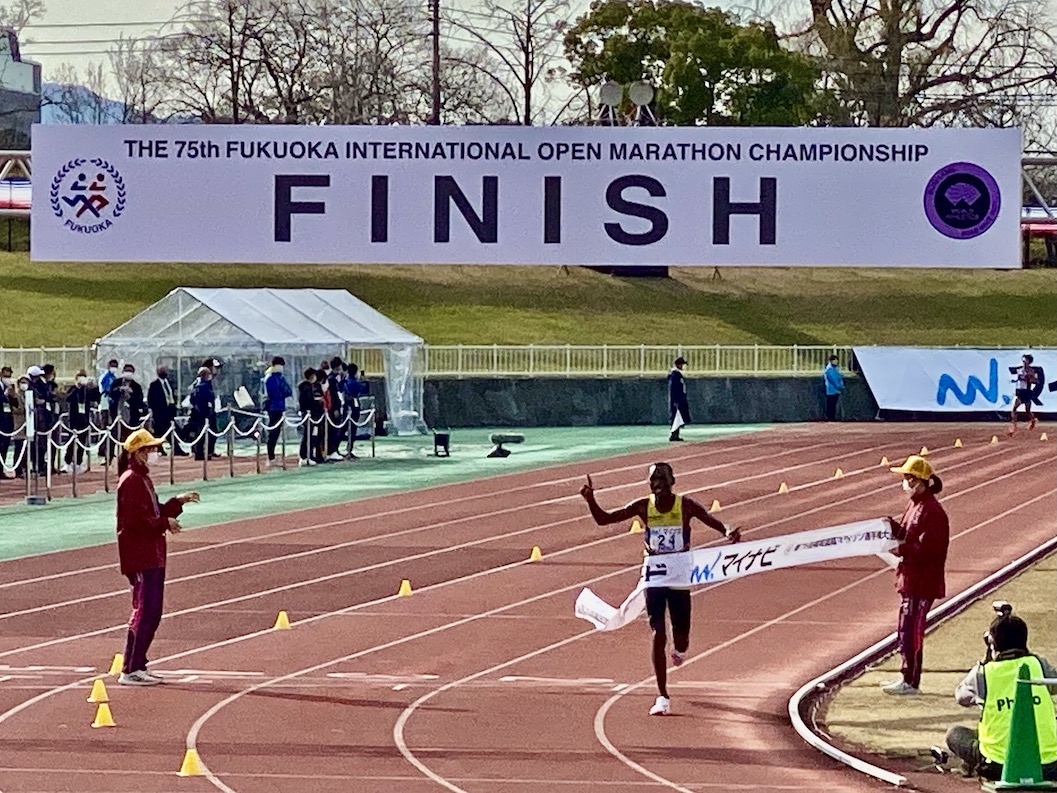 It's still kind of hard to believe that it's come and gone, but you couldn't have asked for a more symbolic choice to win the Fukuoka International Marathon's final running. Coming to Japan from Kenya in his teens to attend Fukuoka Daiichi High School, finding guidance from Olympic marathoner Arata Fujiwara and working his way up the Fukuoka podium every year, Michael Githae (Suzuki) came through to become the final Fukuoka champion in 2:07:51.
In JRN's Inside the Outside - When the World Came to Fukuoka Githae said, "This is my last chance. I'm going to run my best." Just before the start of the race Fujiwara, a 3rd-placer and twice sub-2:10 in Fukuoka, told JRN, "He's really confident. I think his training was better last year when he ran 2:08, but he really believes he's going to do it this time. In these conditions I think it'll go around 2:07:30, which would be in his favor."
The pace went out hotter than that, with a 14:47 first 5 km and hitting halfway in 1:02:42, just off Tsegaye Kebede's 2:05:18 CR pace. But even at that pace it was a big group up front, 16 at halfway not including the pacers. Yuta Shitara (Honda) was a surprise early casualty, stopping abruptly just after 20 km without any sign of trouble. And needless to say, a lot of the rest were killed off in the second half by that kind of opening pace, but at the same time 8 of the top 10 ended up being people who went with it.
Githae, who set his PB of 2:08:17 when he finished 4th last year, stayed right up in it, making a break for it just after the pacers stopped at 30 km. Looking at the splits it looks more like he just slowed down less than everyone else, but in terms of the actual mechanics of the race it was a clean break, one that nobody else could answer and that carried him on to the win with a 26-second PB.
The early pace hurt people enough that out of the people who went with the front pack, only Githae and runner-up Kyohei Hosoya (Kurosaki Harima), 2:06:35 in Lake Biwa last spring, were able to go under 16 minutes from 35 to 40 km. Hosoya staggered around the last lap of the track and fell across the finish line in 2:08:16, just holding off James Rungaru (Chuo Hatsujo) who took 4 minutes off his best for 3rd in 2:08:25. Shohei Otsuka (Kyudenko), 2:07:38 last year in Fukuoka, caught 2:06:45 man Ryu Takaku (Yakult) in the home straight for 4th in 2:08:33, Takaku losing his balance trying to respond and falling a few meters before the finish line, then getting up to stagger in and and fall again in 2:08:38 for 5th.
Another 2:06 guy Daisuke Uekado (Otsuka Seiyaku) was 6th in 2:08:56. A tough day for all but the Kenyans, but despite the die-off in pace for the most part the guys with the fastest Pas were the ones who filled the podium. Kohei Futaoka (Chudenko) and Masaya Taguchi (Honda) both ran sub-2:10 PBs for 7th and 8th, Futaoka coming up from the second pack with the most impressive finish of the day, running 15:30 from 35 to 40 km and 6:32 from there to the end.
Post-race Githae was passionate and glowing with pride. "I was 100% sure I was going to perform in this race," he said. "I came here to win the race, and I won the race. I'm very happy for it." Asked at the post-race press conference how it felt to be the final Fukuoka champion he answered, "In every race there is a person who won the first time the race was held. The person who won that race remains in history. So having won this race, being the last race in Fukuoka, the history will remain. Somebody from Kenya, somebody who came and studied at Fukuoka Daiichi H.S., won this race. And it's Michael Githae who won this race. It will remain in history, it will be something for the future, and someday I can tell my kids, 'I went to Japan, and there was a race in Fukuoka, and I won that race.' It's something, from my heart."
Githae became Fukuoka's last winner, but one other runner earned a distinction today. Closing the arc that began in 1947 with Toshikazu Wada's inaugural win, Ryo Kaneko (Saitama Namerakawa RC) was the last man across the last finish line, turning and bowing when he stopped the clock in 2:30:43. And with that, 75 years of history was at its end, a relic of past times fading away even as the sun rose in Valencia.
In the coming days we'll write something more about Fukuoka's legacy, but as the crowds of locals and fans from across the country lining the streets began to break up and drift away one last time in the afternoon sun it was the perfect ending. An adopted local from abroad who kept the Fukuoka International Marathon true to its name and put its final punctuation in place with Japanese knowhow. Sometimes real-life stories do have happy endings. 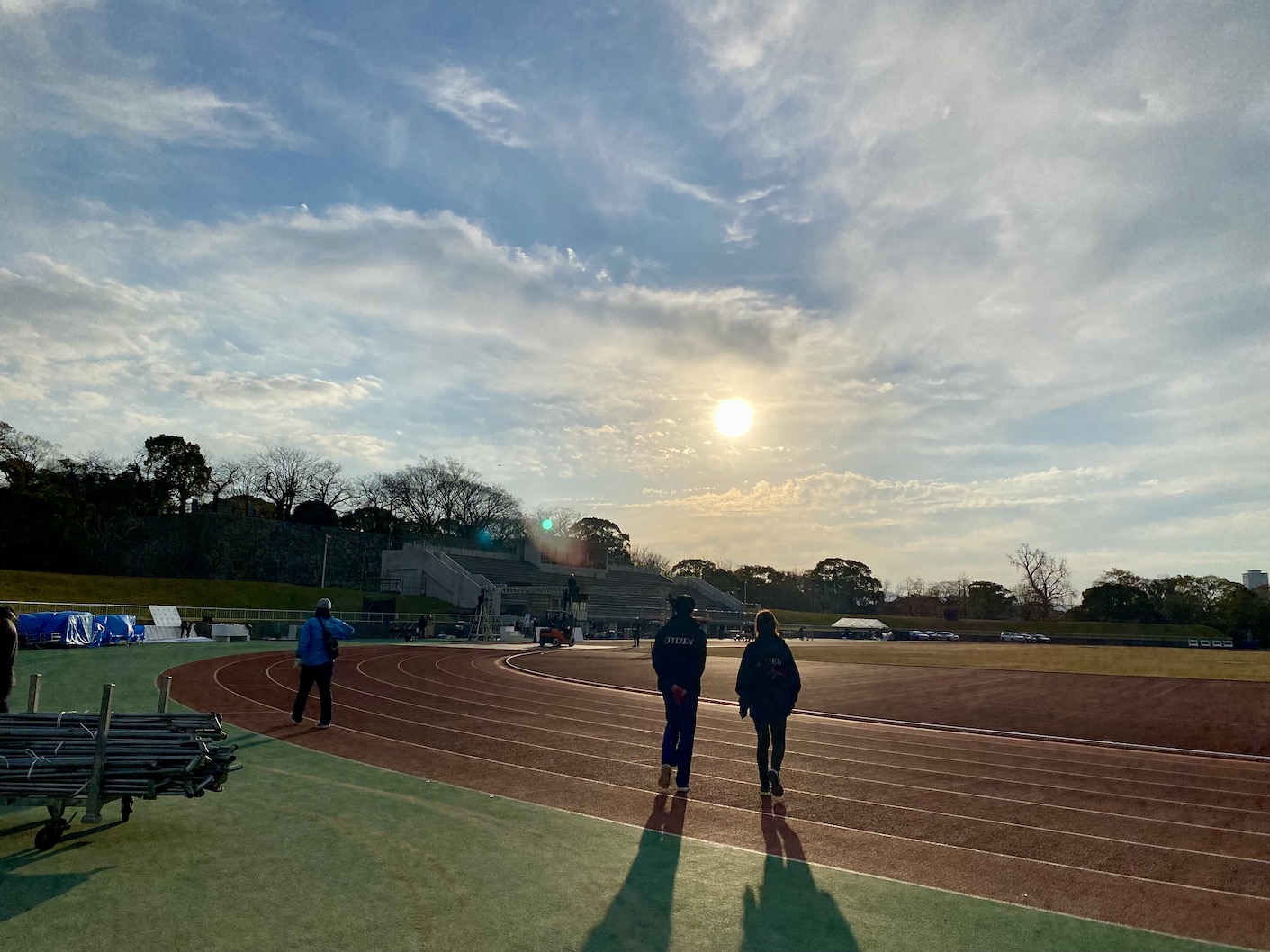 RigaJags said…
Fukuoka will be missed.
It was an interesting race, early pace was very good, end result wasn't bad by any means but could have been even better.
Any word on Yuta Shitara pulling out so suddenly?

Thanks a lot for all the live reporting and everything, great work as usual!
December 6, 2021 at 5:40 AM

Andrew Armiger said…
I remember now: Shitara did run Tokyo last year, where he famously gunned for the NR in a bid to make the Olympic team.
December 6, 2021 at 10:28 PM

January 20, 2022
Scheduled for Feb. 20, 2022, the 16th Shonan International Marathon has been officially canceled. For everyone who has borne hope through the coronavirus crisis and worked together to bring back mass-participation marathons, we had set as our goal the task of staging an event where everyone could participate safely even in the midst of the pandemic. To that end we were requiring a negative PCR test and full vaccination for all runners, volunteers and staff members, and we are deeply disappointed not to be able to follow through for all of those who understood the need for these requirements and made the brave decision to support them. Our initial plan for implementing the race safely was based on these two requirements and additional countermeasures against the spread of the virus. But with the outbreak of the omicron variant, which has a very short incubation period from infection to expression of the disease that decreases the reliability of PCR testing in the three days before the
Post a Comment
Read more